The more data we get as the season goes on, the better equipped we are to interpret matchups and make informed decisions. Then Week 6 comes along and blows it all to hell.

The unpredictability of sports is what keeps us intrigued, as frustrating as it may be at times. Numbers are supposedly to be black and white, with no inherent bias. That may be true, but it doesn't mean that we can't misinterpret them.

Not all advanced metrics are meaningful and some can be downright deceptive. My aim here is to point out potential outliers that could steer you wrong when making key lineup decisions for Week 7 and beyond.

The very talented (and lovely) Phil Clark publishes his FSWA-award-nominated series on WR Snap Counts and Target Trends on RotoBaller each week. A major component of fantasy value for receivers, tight ends, and running backs alike is target totals. By recognizing trends and major risers or fallers, we can identify players to add, drop, start, and sit based on matchups.

Of course, this is where I reveal that even target share can be misleading at times. "Owning" a large market share of your team's passing targets doesn't always translate to production, especially on a bad offense. Thinking of one in particular where the gang wears green...

Conversely, players who are more efficient with the targets they see or may have a lower rate based on a high-volume passing attack could be undervalued. Let's look at both sides of the coin in this week's editions of "Stats That Lie." 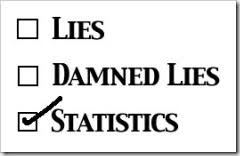 It's no surprise that Hollywood Brown is third in the league in total air yards and AY%. He is the field stretcher for a run-first offense that exploits the secondary when they least expect it. It might be surprising to see that he is ninth in TGT%. At first blush, the reaction is that he garners that market share because the Ravens don't have a deep receiving corps and limit their passes to Brown, Mark Andrews, and the running backs. This is true to an extent but Brown's 42 total targets rank 18th among all wide receivers.

Brown is known as a boom-or-bust player in fantasy but his target totals have been steady and he is among the leaders in that area. He hasn't seen fewer than six targets in a game this season, even as the Ravens rank in the top-five in total rush attempts once again.

Here's the deceptive part: his 61.9% catch rate ranks 133rd among all skill players. The targets will be there, but he isn't always going to come down with them. That's by no means an indictment on him as a player, it's a byproduct of how he is used in this offense. Brown does have seven receptions of 20 yards or more, so the boom aspect is still there while the bust has been mostly mitigated.

Brown isn't as risky as you may imagine, nor will he have the potential to be a top-1o fantasy receiver as some posited in the preseason. He is simply a volatile WR3 with a high weekly ceiling. If you happen to play in a league that rewards PP1D (points per first down), you'd be glad to know that Brown is tied for 19th in that department. More leagues should play PP1D instead of PPR, don't you think?

I'm almost afraid to touch this one because anything short of calling Fulgham this year's breakout performer doesn't go over well in the fantasy community. This particular stat is also very telling yet misleading at the same time.

Fulgham was non-existent in terms of fantasy relevance for the first year of his NFL career and the first three weeks of 2020 as well. He caught two passes for 57 yards and a touchdown in San Francisco but only saw two targets that game. Then came Pittsburgh where we ALL discovered his name. Fulgham didn't just have big yardage, he caught 10 of the 13 targets thrown his way. He followed up with six receptions for 75 yards and a touchdown, making it three straight games with a score. His 10 targets that day made 23 in a two-week span and 26 over his three weeks on the active roster.

While that target total ranks far down the list, his extraordinary target share over the small sample places him 11th among all wide receivers, ahead of Odell Beckham, Cooper Kupp, and DK Metcalf. With an average of 10.9 yards per target, this could indeed be indicative of a breakout season but perspective is needed.

Fulgham has achieved his target share due to two huge games. One down week might tank that. As of this writing, the Eagles haven't played on Thursday Night but once again I am being realistic in suppressing expectations. The Giants have only allowed one 100-yard receiver all year (CeeDee Lamb) and no other WR has even reached 75 yards, thanks mainly to James Bradberry. With no other options to distract from Fulgham, he'll draw plenty of attention from Bradberry and others. I am ready to buy into Fulgham as a streaming option even if Alshon Jeffery and DeSean Jackson ever return but it's with the understanding that his target share will eventually even out.

It was a slow start in the Big Easy for Sanders but the last couple of games before the bye reaped great rewards for fantasy managers. Sanders caught six of nine targets for 93 yards in Week 4 and outdid that with 12 catches on 14 targets for 122 yards in Week 5. Steadily trending upward, the return of Michael Thomas comes at an inopportune time. That is, if it's coming at all.

The team's franchise wideout is now questionable again after aggravating a hamstring that could be related to his existing ankle injury. Don't forget about his mysterious suspension that came on the eve of his supposed return too.

If Thomas doesn't go in Week 7 or beyond, Sanders seems like an obvious start. Otherwise, it's a tricky proposition.

His value has been buoyed by the target volume but a decline, especially a substantial one that could happen when Thomas returns, could make him unplayable outside of very deep PPR leagues. For what it's worth, Thomas had the second-highest target share among all WR in 2019 at 34.5%. The only player who topped that was... Emmanuel Sanders at 43.8%. Of course, that was with Denver and San Francisco, so circumstances have changed.

Targets are indeed the lifeblood of a receiver's fantasy value but we do need to see them convert into yardage and touchdowns. Sanders' 39.9% Air Yard Share is even higher than his target share but his 9.0 aDoT is middle-of-the-pack and his air yard total is barely higher than guys like Zach Pascal and Jeff Smith (see below).

Sanders is worth a shot in Week 7 based on the uncertainty surrounding Thomas but GMs should know that the Panthers allow the lowest points per reception to WR relative to the opponent's average. Here's a chance to share the very latest #DFBeersReport courtesy of Mike Beers on Twitter. 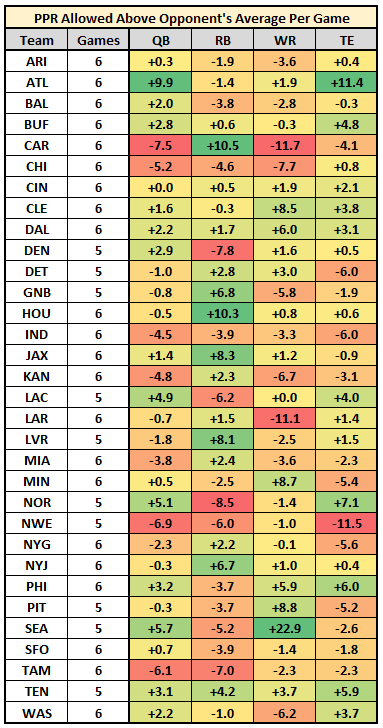 The Saints' next two opponents are Chicago and Tampa Bay which allow the third and 11th-fewest fantasy PPR to the receiver position. This is a good time to exploring trading Sanders away if possible.

I'll admit to being excited for a minute about the potential of a fantasy sleeper on a forgotten team (or a team we wish we could forget) like the Jets. By Week 4, they were rolling out Braxton Berrios and Chris Hogan as starting wideouts due to the sheer volume of injuries. In stepped Jeff Smith, an undrafted second-year player out of Boston College with 4.4 speed and apparent doppelganger to Travis Fulgham in terms of career trajectory.

He was inactive for three weeks, suddenly burst onto the scene with seven catches and 81 yards in Week 4 on nine targets, then saw 11 targets the following week, catching only three for 23 yards sadly. Was Smith the playmaker this team sorely needed? Apparently not, as he fell to four targets in Week 6 with Breshad Perriman back in action. Despite the ball being thrown his way a ton, he only averaged 4.7 yards per target.

Jamison Crowder is already second in the league in target share, so with Perriman on the field again and Denzel Mims looking ready to return this weekend, Smith is a distant fourth in pecking order for a team that ranks last in passing yardage. He could be a deep dynasty stash for 2021 if Crowder is traded and/or Perriman signs elsewhere but he would need Trevor Lawrence on the team in order to jump back to relevance.

The first WR picked in this year's draft, Ruggs hasn't gotten the chance to full showcase what he can do yet. He missed two games, exited early in two others and the Raiders have already had their bye. Since we're looking at target rate rather than total targets, that shouldn't matter if he was a major part of the offense in those couple of games, much like Fulgham.

Ruggs hasn't been targeted much when he's actually on the field but he doesn't need to be. Unlike a slot receiver who depends on volume, Ruggs is content to take one pass and turn it into a 72-yard touchdown. He has quickly shown exactly what Mike Mayock envisioned when drafting him with his blazing 4.2 speed. A mere 11 targets has resulted in 177 yards.

Simply put, his target share doesn't matter if he's hyper-efficient on deep balls and can outrun the defense at every step. When a player averaged 16.1 yards per target, it doesn't take very many to be productive. If Ruggs stays healthy, he has boom potential any given week regardless of opponent and may be considered a midseason trade target.

Here is another rookie, albeit one who has yet to explode on the scene to the level of Justin Jefferson, CeeDee Lamb or Chase Claypool. Shenault had been steady but not especially fantasy relevant until last week's dud. He had been on a steady climb in terms of targets and receptions until he laid an egg in a great matchup with Detroit.

His steady snap count totals and occasional involvement as a runner are good signs. The red flag isn't his one-week drop in target share, it's the complete lack of involvement in the red zone.

As far as his low Target%, it has to do with the fact that the Jags are passing so much to so many players. After six games, they are fourth in total pass attempts at nearly 43 per game. D.J. Chark absorbs most of those when healthy and Keelan Cole is actually the team leader with 38 targets. Shenault is right up there with 36.

Shenault has yet to provide a huge play or a breakout game but he should continue to grow as the season progresses. He can provide a steady floor in PPR leagues but is nearly useless in standard leagues without any touchdowns. He has seen just as many targets this year as Emmanuel Sanders, so being higher on the veteran than the rookie would reek of recency bias. Maybe reverse ageism too.