It's been a month since the last time we took a look at our beloved quarterbacks. Numbers are numbers, and numbers don't lie. You can twist them, but looking at them objectively, numbers say that no matter what, rushing the ball is almost always a worse option than passing it in today's game. That's why this column is the most important one you'll read today. It's time to tackle how quarterbacks have done through six weeks of play.

To gain the biggest edge in your fantasy football league, it's necessary to understand how to apply the advanced statistics being used in sports nowadays. Back in the day, it was all about wins and losses, passing yards, and touchdowns scored. It's not that those stats are now worthless, they just don't offer enough information to savvy analysts. While football is still in its infancy compared to baseball in terms of analytics, the evolution the sport has seen lately in those terms is notable.

Each week, I'll be tackling NFL's Next Gen Stats, bringing you data from the previous week's games with notable takeaways you should consider when assessing fantasy players for the upcoming week. In case you're new to the series, or Next Gen Stats altogether, I recommend you read our NGS-primer. Now, let's get to the data!

Week 6 - The State Of The Passing Game

One of the most important concepts to consider when analyzing players are Air Yards. The metrics around it are key to know who is really over-performing or under-performing among receivers and passers, but it doesn't have much to do with rushers.

Today, I'll present each of the stats from the NFL's advanced metrics site, its correlation with quarterback-fantasy points, and a list of leaders and trailers in each category along with some notes and takeaways on both the players' and the metrics' impact on fantasy football as a whole.

As we'll be discussing quarterbacks and their passing stats, I will reduce the fantasy points per game averages to just those related to passing. That means that I have removed the rushing/receiving fantasy points the qualifying quarterbacks have logged during the season. I've called this metric paFP/G, which is to say passing Fantasy Points per Game.

So let's dive in. Note: The cutoff is set at 45 pass attempts. 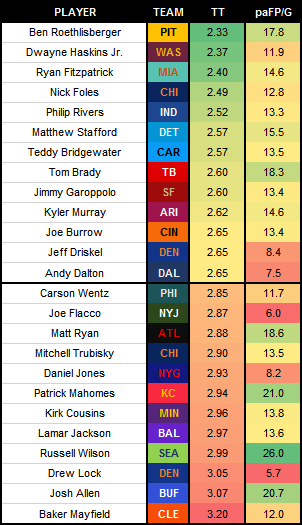 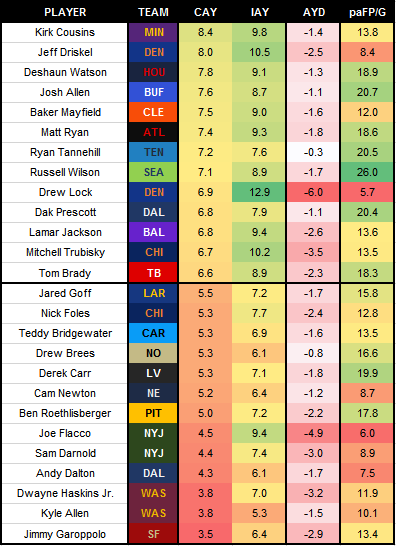 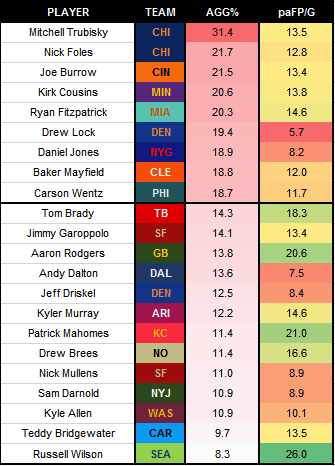 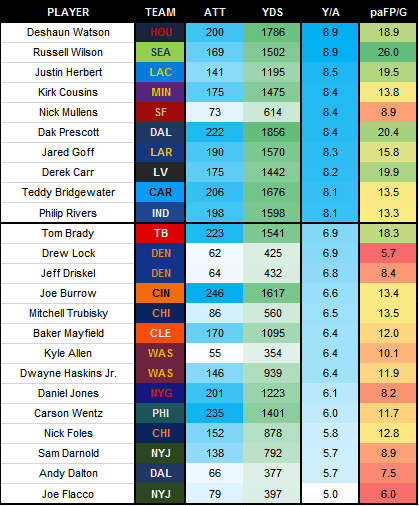 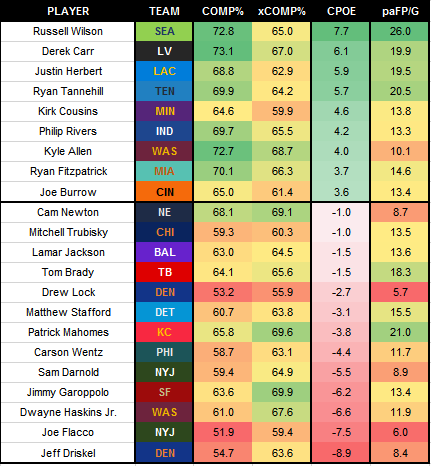 That's it for today. Until we meet again next week, I hope you can crush your waiver wire, set up the best possible lineup, and get ready for another weekend full of fireworks!