Analysis: I know, he's much more OF than 1B but the eligibility stands and I need to get this out. Santana is polarizing thanks to being a journeyman breakout in his sixth MLB season around a questionable, juiced-ball environment. I get that. But he hit 28 homers with 21 steals in just 130 games last year (511 PAs)! The last time he got consistent PT over a season was his 2014 rookie campaign, where he hit .319 with 20 steals and seven homers in 101 games (430 PAs). Then lofty strikeouts and cold streaks cast him to part-time duty or the minors, but 2019 jolted his stock to life.

His expected return is nearly blown away across the board, with the extra steals backing his case. I understand his 27.7 ft/sec sprint speed (108th out of 292, min. 100 opps) isn’t astounding, but his 3.86-second split to 90 feet is tied for 52nd (out of 446). That speed gives him the defensive range that inspires Texas to let him open 2020 as their everyday centerfielder.

As for the bat, he hit .268 or greater on fastballs, breaking, and offspeed pitches alike. His expected average of .275 and impressive .463 xwOBACON (top 10% mark) sweeten the pot. The 91.4 MPH average exit velocity ranked 23rd among 250 qualified hitters. I don’t love just throwing numbers out left and right, but his impressive stats warrant it. He hit above .275 against both left-handed and right-handed pitching, a true switch-hitter, but his spray charts from both sides are strong: 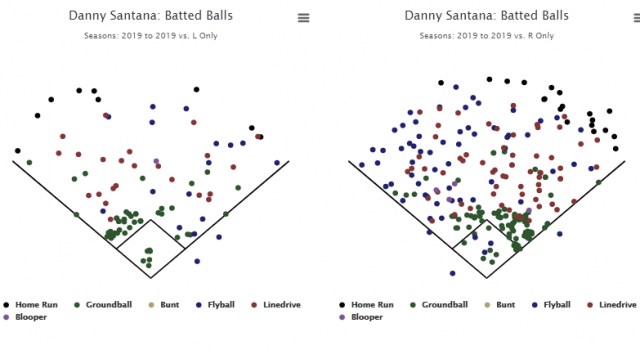 While I expect some regression for Texas hitters across the board given the new, air-conditioned venue, even modest give on the power leaves plenty of room for profit. His stat line projects closer to the 70th pick from the HR+SB cohort, but here we are in the 140s!

Verdict: Target, Santana is quite undervalued at his current draft slot

Analysis: Honestly, power’s upward trend calls for lower standards by which one should measure overvalues in 2020. Alonso doesn’t offer much that Matt Olson doesn’t come 20-25 picks later, except that Alonso played a full season in ‘19 and won Rookie of the Year in New York. He finished ranked 22nd per Yahoo’s 5x5 scoring ranks, with his league-leading HR totals (rightfully) propping him up.

Chasing historic seasons is usually a bad idea. Again, Alonso is not bad, but you’re paying a name premium on him for great-not-legendary stats. If he isn’t going to hit above .260 or steal any bases, you need him to be the league leader in homers to cash in. Don’t count on it!

Do note the expected return has 34 HR + 7 SB, with 41 HR/SB barely edging Alonso’s projected 40. And you could easily make the case that a stolen base is worth more than a homer in today’s economy, but that’s for another article.

And most of us in “the biz” agree that Alonso’s average will likely be closer to .250 than .260. He hit .280 with a .298 BABIP in the first half, dropping to .235 with a .258 BABIP in the second. Just because the cold came second doesn’t make it more valid, and he did have a .257 xBA per Statcast. But homers don’t factor into BABIP and unless you’re calling for 50-plus homers again, the average is going to also take a hit beyond BABIP regression.

Verdict: Pass, Alonso is overvalued at his current draft slot

Analysis: Abreu has posted average exit velocities in the top 10% of the league over the past three years, with expected batting averages above .280 in his last four. His xBA of .283 last season was 49th out of 320 hitters (min. 250 PAs). All past indicators point to his exceeding the expected average return for a power hitter here, while meeting the strict power quota and providing more counting stats from within the ChiSox’s upgraded order.

It’d be foolish to take last season’s 123 RBI and simply add more due to improvements around him, but his floor is near triple digits. He blasts the ball -- his barrel rate shot up to 12.8% from 9.1% last season -- he plays in a hitter-friendly park, and gets two subpar rotations in his division (DET, KC). His value checks in closer to the 50-60 pick range, but here we are in ProfitLand.

And most of the time, there’s another side of the coin when there’s significant value within the top-80. Abreu has the park, the offensive environment, and the durability. He’s topped 550 PAs in each of his six MLB seasons, and that would’ve been at least 620 PAs if it weren’t for a frightful procedure to deal with testicular torsion. Man, I don’t enjoy typing that phrase. Bottom line: You are getting one of the safest bats in the game at a discount.

Verdict: Target, Abreu is undervalued at his current draft slot

Analysis: You’re paying up for Muncy at cost against a power-shorted three-year average from 2017-19, which triggers a “price-check call” to me. His batted-ball metrics settled down a bit after his breakout 2018 -- expected and understandable -- but in 5x5 formats where that walk rate over 15% isn’t generously rewarded then you may want to pivot elsewhere.

It’s tough assessing multi-eligible bats in a vacuum -- I get that flexibility has value -- but consider some similar bats first before telling me whether the added positions are really worth 2-4 rounds of draft capital?

I don’t see it. Just ask yourself if Muncy’s solid floor and versatility is what you’re buying, or if you think the numbers are actually worth the sticker price.

Verdict: Pass, Muncy is overvalued at his current draft slot