While Bryant still has above-average speed, he simply pulls weak grounders right into defender’s gloves. Just look at the cluster towards the third baseman per his Fangraphs 2019 spray chart: 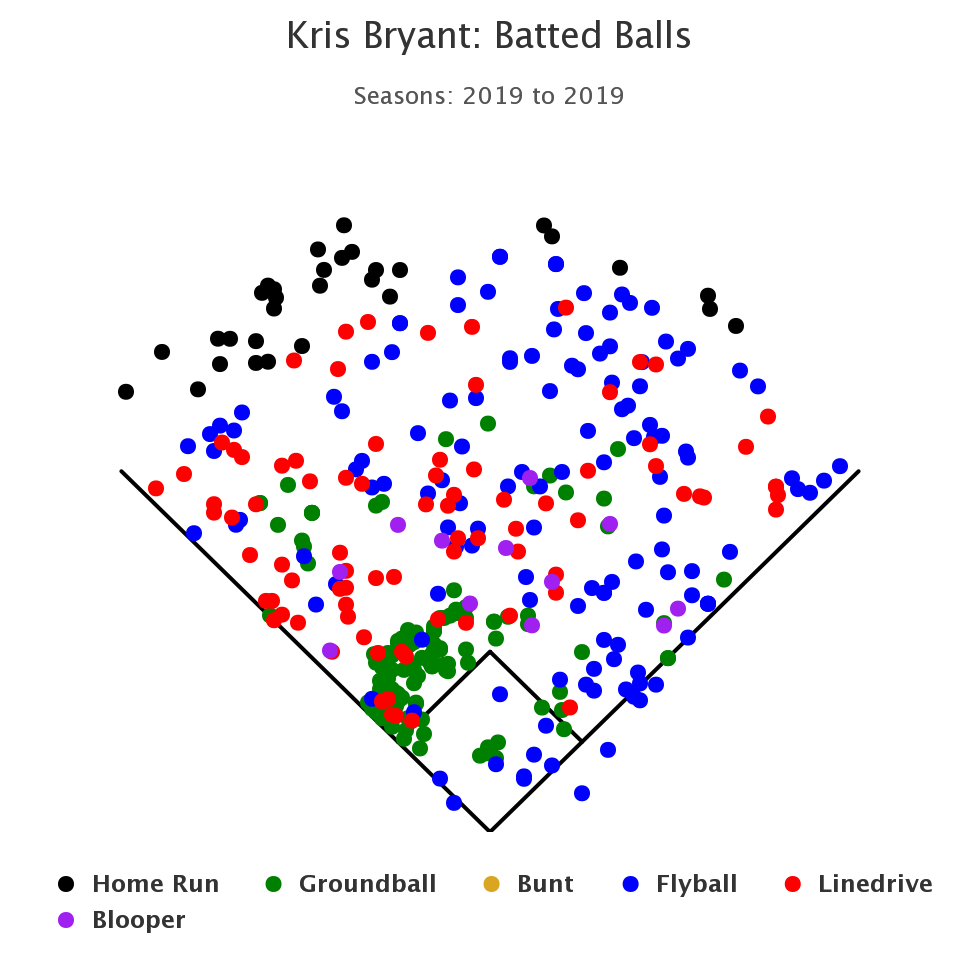 His xBA slip has been gradual, from .272 in ‘16 to .268 in ‘17, .255 in ‘18 and then that .246. That said, he’s managed to outdo that mark throughout his career, but dropping below .250 enters troubling territory. His stellar plate discipline and spot atop the Cubbies’ order will yield triple-digit runs, but his contributions across the 5x5 board don’t match the inflated power prices of 2020.

His name and pre-injury track record help boost the perceived range of outcomes, but there’s more reason to worry. Some players deal with suboptimal average launch angles, but survive off a combination of weak grounders and hard-hit flies/liners. Bryant’s 92.3 MPH average exit velocity on flies/liners in 2019 ranked 162nd out of 250 qualified hitters.

Analysis: You can make DH-only work when it’s Cruz. His Statcast profile is painted red from wall to wall, with 99th percentile exit velocity and the best xSLG of 2019. His legs may be lumbery, but his xBA was .296 in ‘19 and Minnesota sports an even better lineup for 2020. You’re not in it for the sprint speed, but look at that bat: 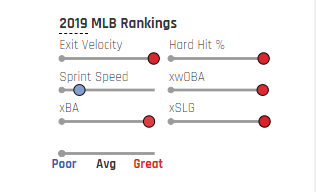 There’s understandable trepidation given Cruz’s age and his missing time last season, yet those 120 games still yielded an incredible 41 homers, 189 R+RBI and a .311 average. That would be beautiful over 150 games, but 120?! The projections have baked in an IL stint and some potential ball dejuicing, but Cruz is worth the utility-only strategizing.

Verdict: Target, Cruz is quite undervalued at his current draft slot

Analysis: You might think any picks in the 200s are free from these chains, as you’re almost sure to profit with such a late selection. Not so fast, as power output from this tier is a bit more respectable than Joc is slated to generate. The Dodgers got an everyday stud in Mookie Betts, which may hinder Joc’s momentum in the lineup. Not only that, but rosters expanding to 26 players may increase LAD's propensity to micromanage PAs. It'd only be 10-15 or so to me, but every bit counts.

Pederson may still bat leadoff against southpaws for now, but if he loses that to Betts then his projections will really tumble. Mookie will hold down right field, with Cody Bellinger taking up first and center, A.J. Pollock covering left and some center, with Matt Beaty stepping into first and left field on top of utilitymen Chris Taylor and Kike Hernandez.

As it stands, folks are better off aiming for Justin Upton a round later, or the likes of Hunter Renfroe, Renato Nunez and Randal Grichuk 20-50 picks later. If you have deep benches to flex then you’ll get Joc’s production at a better cost, but most of us can’t swing it. I want upside on my bench, and we largely know who Joc is and isn't.

Verdict: Pass, Pederson is overvalued at his current draft slot

Analysis: Khrush Davis, which my phone still tries to autocorrect to Khrushchev, is being written off in 2020. Hindsight is likely to kick many asses as a result, given how Davis was on pace for his traditional 40-homer season in 2019 until a wrist injury suffered in the outfield derailed his campaign. He collided with the wall on May 5 and eventually made his way to the 10-day IL on May 22. Let’s look at 2019 split into pre-IL and post-IL, with a healthy 2018 for context:

Lest we forget that Davis tallied the fifth-most barrels in ‘16, third-most in ‘17, and the most overall in ‘18. This came while crossing the 150-game and 600-PA thresholds in those three seasons. Yes, the .247 thing is comical, but an age-32 season for someone that doesn’t rely on speed provides little reason for concern.