Simply because a player's expected stats are better than his results doesn't mean he is sure to regress positively or that he is fantasy-relevant in any way. For example, Jordan Lyles has an xSLG 51 points lower than his SLG but his xSLG is still 72 points above league average. Plus, his strikeout rate is pathetic and all of his other Statcast numbers indicate that he's just pitching terribly. This is why we have to dig into the entire profile to determine if this difference really means anything.

I've picked a few starting pitchers with sizeable gaps between xSLG-SLG that could indicate improvement is in store. These pitchers are widely available on waiver wires so consider stashing one or two if you have a roster spot open and are willing to take a leap of faith based on Statcast numbers (and my recommendation).

The much-ballyhooed prospect finally got the call on August 9 much to the delight of Phillies fans and dynasty managers. As it tends to happen with rookies, he was inconsistent but flashed some of the arm talent that could make him special.

Spencer Howard picked up his first career strikeout as part of a scoreless first inning in his #MLB debut. pic.twitter.com/MU33Z5VK8Q

He's had a hard time limiting hard contact thus far, allowing 19 hits in 11 2/3 innings with four of those leaving the park along with a triple. Lefties have been the main source of contention, going for a .423 BAA and .826 SLG so far. Amazingly, despite those four taters, he's only allowed one barrel and his xSLG is nearly 200 points lower than his SLG allowed. Additionally, his 4.11 xERA, while not great, is far better than his 6.17 ERA.

This may be little consolation but when you take a talented young player whose peripherals suggest he may show improvement, that could be reason enough to hold on if you added him in redraft.

Howard's last start was postponed so he should be on the bump against the Nationals on Monday evening. If he can survive Juan Soto or maybe just pitch around him, the Nats don't have a ton of left-handed thump. Adam Eaton is batting .228, Eric Thames is batting .221, and Asdrubal Cabrera is down to .243. Howard is still a risky stream at this point but bears monitoring a little longer.

If you glanced at Wacha's percentile rankings with no knowledge of his actual ratios this year, you might imagine he's faring well in 2020.

Wacha owns a 7.41 ERA, 1.76 WHIP and is allowing 2.12 HR/9. It's his four-seamer that's getting clobbered to the tune of an atrocious .958 slugging against. It should be "down" to .709 based on xSLG but that's still ugly. His velocity isn't down and the fastball spin has actually increased, although his vertical movement has flattened out a bit. That might explain why he's mostly getting hit hard in the higher part of the zone, particularly the outer part of the plate.

The change and cutter have been effective, so if Wacha can keep his heater away from the heart of the plate and work lower in the zone, there is hope for a turnaround. His groundball rate usually resides close to 50% but has dropped to 38.8% this season. The increased fly ball rate along with an inflated 20% HR/FB (his career rate is 12.2%) have been the disruptors of his ratios as a Met. This is promising as he doesn't need a mechanical adjustment so much as a more focused plan of attack to work lower in the zone with his four-seamer. Easy right?

Like anything else in Pittsburgh, Musgrove has been terrible, disappointing, and terribly disappointing. He was supposed to be the stabilizing force in the rotation and, in fact, many considered him an undervalued SP in fantasy drafts. Before 2020 began, we told you how he was a SIERA underachiever and potential breakout at age 27. He has been anything but solid, turning in a 6.75 ERA and 1.77 WHIP resulting in an 0-3 record.

Musgrove's repertoire is part of what makes him so attractive, as he works in six different pitches to varying degrees. He's had relative success with all of them, using none as gimmicks and not relying too much on any one. While his xstats on his pitch mix have fluctuated through the years, there are some jarring differences this season. See if you can spot the ones that stand out.

For those that missed it, here's a closer look. 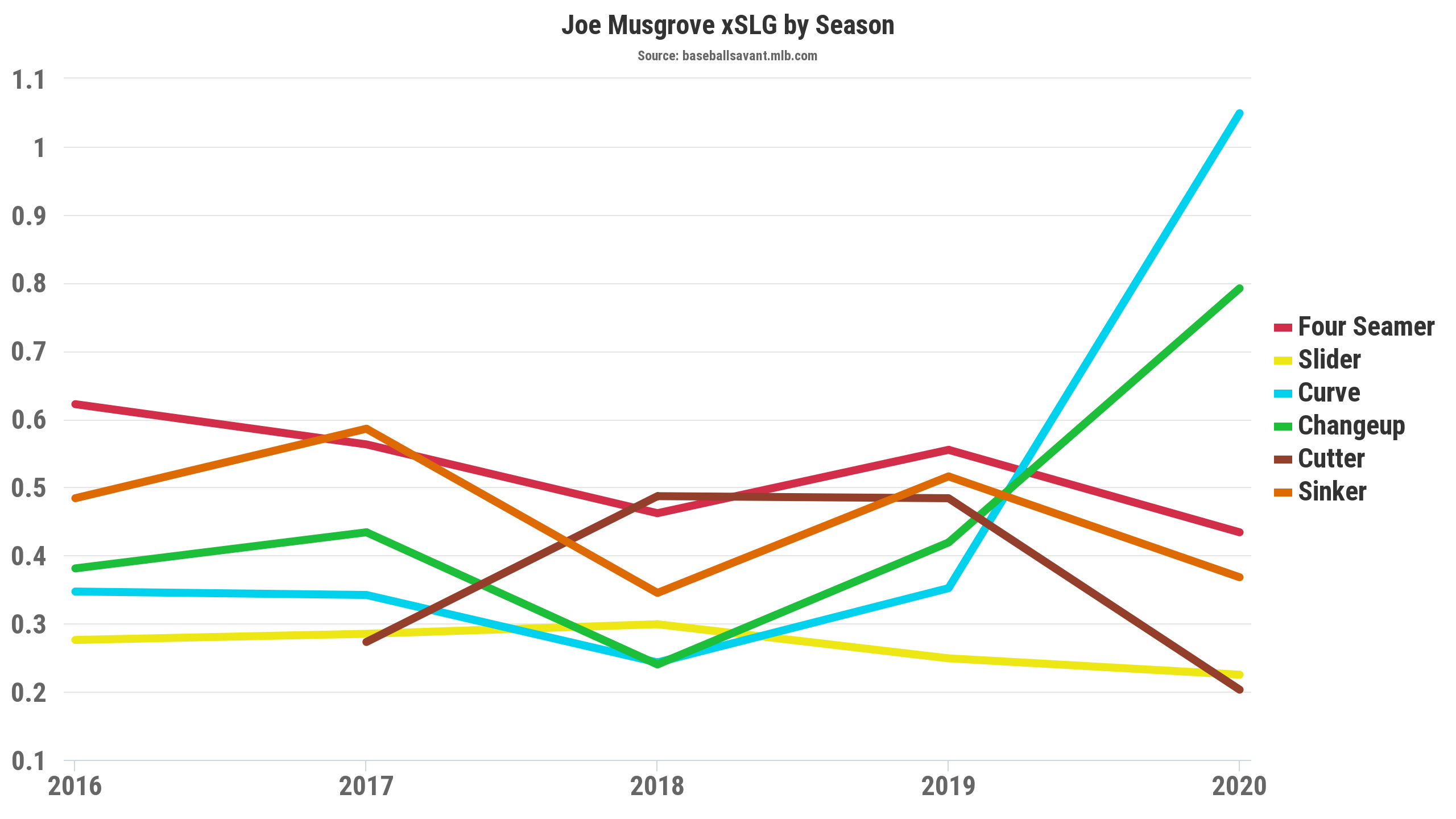 That's quite the spike. In his three starts of 2020, his curve and changeup have gotten rocked, whereas they used to be the most effective part of his arsenal.

Part of the reason he has struggled could be a simple matter of injury. He hit the 10-day IL due to triceps tendinitis and hasn't pitched since August 4th, so perhaps he was feeling discomfort beforehand or wasn't fully in game shape. Plenty of starting pitchers have gone down this year already. It's a bit of speculation but the curveball in particular might have forced more strain on his arm and correlate to the injury.

If Musgrove comes back strong, it could be a different player altogether. When he does return, it may not be in a Bucs uniform though. The Braves are reportedly interested in him and it makes all the sense in the world, since they need reliable vets in their rotation and the Pirates surely want more prospects to keep building for the future. A healthy return and a move to a contender, even if the home park is a downgrade, might make for a very valuable commodity.

I'll spare the details on Weaver's Statcast profile. Let's just say his page is a bit chilly because it's filled with blue. Among those, his .564 xSLG is in the bottom 8% of the league. The fact that it's 80 points lower than his SLG still isn't very comforting

Weaver gave up six runs and seven hits in each of his first two starts, falling apart once he got around the 75-pitch mark. Of course, it's a problem that he got to that point by the fourth inning in the first place. Since then he had shown gradual improvement in each start until another rough outing versus the Giants. 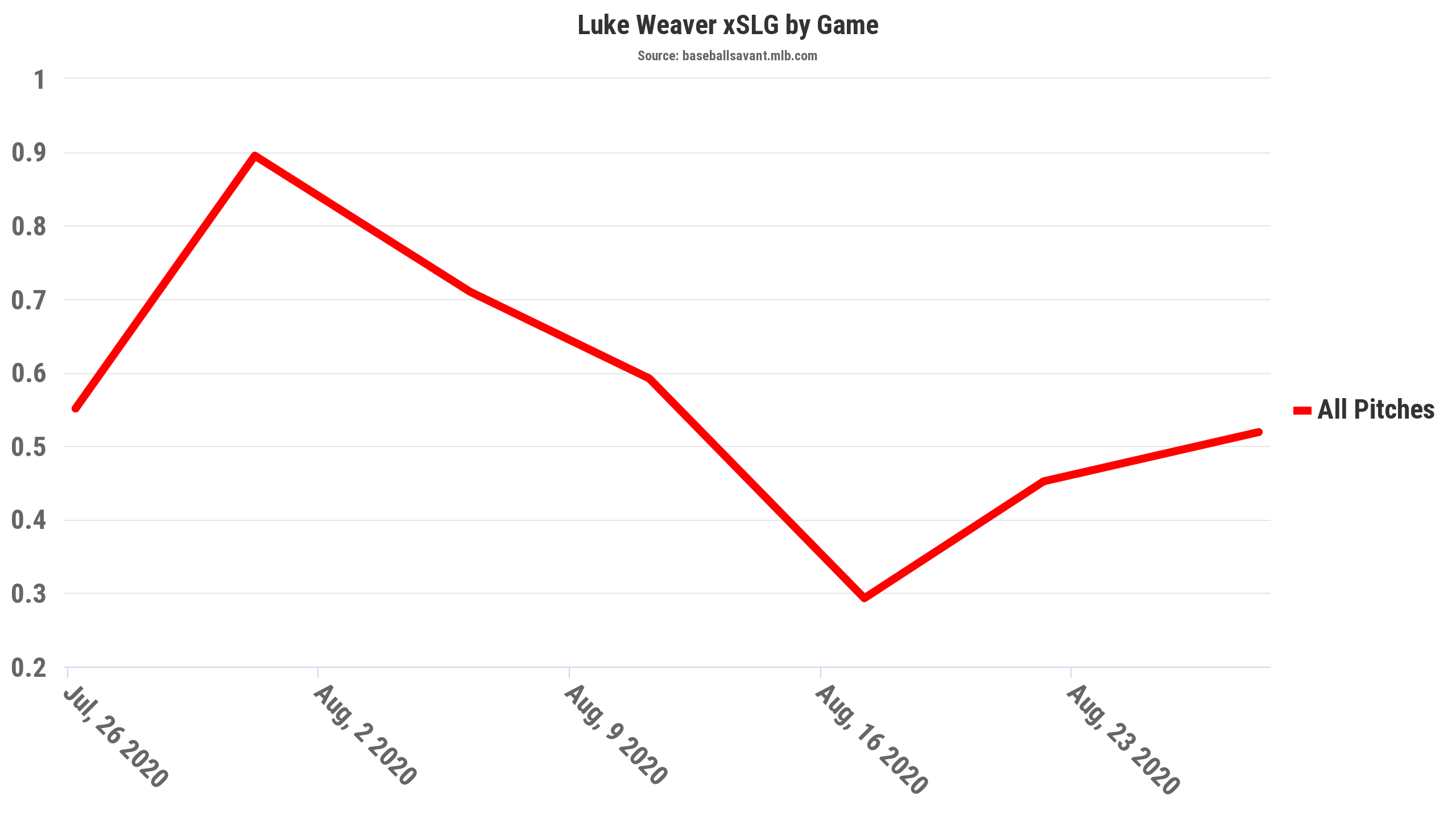 His 18.6% K-BB% is quite good and he's not putting extra runners on base at a high clip, so it comes down to giving up hard contact; hence the high SLG percentage. The reason for Weaver's struggles is a mystery as he looks good for stretches and then implodes. Like with Wacha (above), his fastball is the pitch giving him trouble even though his velocity and spin are both up!

The entire D-backs staff outside of Zac Gallen has been lit up this year, so maybe they just need to call a technician to fix the humidor. Weaver is an enigma and too unpredictable to truly trust but at the same time it wouldn't be a shock if he started stringing together quality starts based on his plate discipline and underachieving ways.