In this chaotic year, MLB starting pitching is just one of the many things that make our lives as fantasy managers difficult.

As if we don't have enough to worry about in these days and times, keeping a healthy rotation intact or keeping your ratios from imploding on any given night is becoming harder by the day with key starters falling by the wayside. Still, there is always hope out there with some lesser-known names.

This week, I dive into the pitch movement leaderboard to find some of the most effective individual pitches out there among lesser-rostered starting pitchers. More importantly, I'll dive deeper into pitch mix and underlying metrics to decide whether each SP is worth rostering.

My goal with this column each week is to identify pitchers whose progress, or lack thereof, in certain Statcast metrics can make for actionable advice in fantasy leagues. This isn't strictly-speaking an add/drop list, but an invitation to dig deeper into each player's profile to decide whether further consideration is warranted. Statistics taken from baseballsavant.mlb.com current as of August 18, 2020.

Here's your classic overachiever. Dobnak has been a revelation in his rookie year, both in reality and fantasy. After five starts, he's posting a 1.42 ERA, 0.87 WHIP along with a 4-1 record. Good thing we have Statcast to pull back the curtain and cut through the smoke and mirrors.

In addition to a pitiful 14.6% K-rate, Dobnak is below the 50th percentile in every area other than xERA. Even that betrays his success, as it says he should be pitching to a 3.78 ERA. Dobnak has gotten by with premium sink on his sinker; that pitch has the fourth-most vertical drop among all individual pitches with SP who have thrown at least 100 pitches. It's his go-to pitch but it's not one that provides the hook very often with a mere 7.8% Whiff rate. It's meant to induce grounders and soft contact, which it is doing very well. He has a 64.5% GB% and 20.2% Soft%, both well above league standards.

Those grounders may start squeaking through holes more often, however, and hitters may start looking for the ball lower in the zone the next time around. A .189 BABIP that's a full 100 points lower than MLB average is simply not sustainable. His rolling xwOBA continues to trend downward. 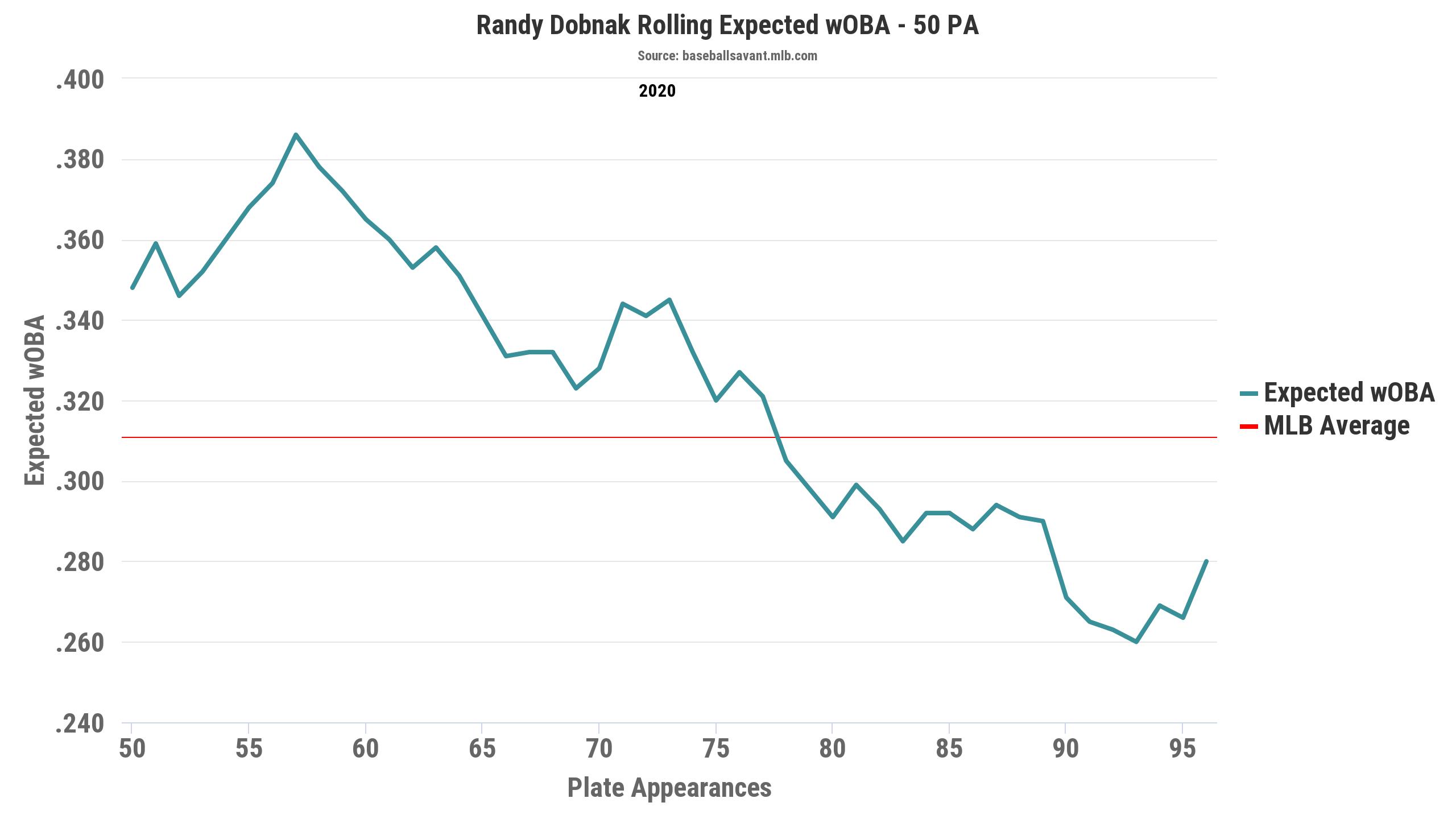 If there were at least solid K totals to withstand a rise in ratios, he might be worth holding in mixed leagues. As it stands, he can be streamed in good matchups against pull-happy teams but don't believe in a full-blown breakout.

The Reds were supposed to be an offense-heavy team with a talented but inconsistent pitching staff. Switch it around and you have an accurate gauge of Cincy's early 2020.

Trevor Bauer and Sonny Gray have been lights out and both rank among the leaders in pitch movement between Bauer's four-seamer and Gray's curve. Mahle joins them with his fastball, which has a 59% horizontal break above league average as well as 12% vertical drop above league average. He utilizes the pitch 56.5% of the time, which is about 10 points lower than his first two years in the majors. Perhaps showing it less often has made it more effective, as results have been extraordinary with an .059 xBA against the pitch.

Small sample size warning: Mahle has tossed 13 1/3 innings to this point so one rough start could throw all this off. That said, he seems to be learning a thing or two from his rotation mates and will benefit from playing Central division opponents, especially in the National League. He hasn't even faced the Pirates yet... Mahle is rostered in just 4% of Yahoo leagues, so there is ample opportunity to take a chance that the breakout is real.

This is a good time to check in on Paxton again to see if he's worth rostering any longer. There were reports during the extended offseason that he was adding spin to his fastball. This worked wonders for Lucas Giolito and is the key to teammate Gerrit Cole's dominance. It hasn't happened though.

Paxton's 2217 spin rate on the four-seamer is actually less than last year's 2263 spin. Results have been far worse too, as he's allowing a .341 AVG and .683 SLG against his unimproved fastball. His cutter hasn't done too well either, but he throws the heater nearly 60% of the time, so it's key to his success.

One area which has improved is the horizontal movement, which ranks far above league-average. 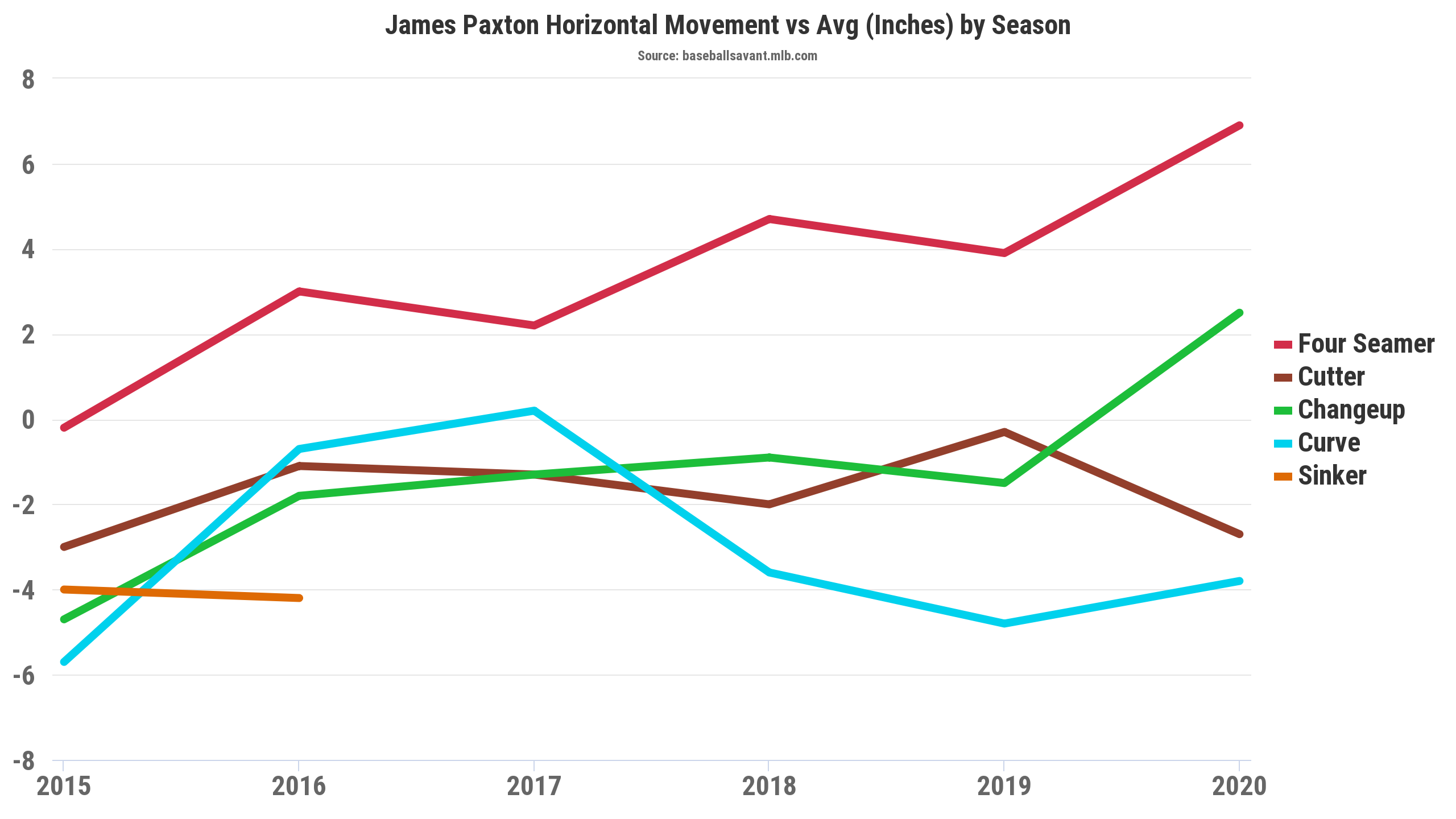 If he had the accompanying vertical movement to complement this or the added spin rate as promised, then he could be posting much better results. Instead, we've gotten consistently mediocrity. The good news is that he hasn't given up more than three runs in any outing. In fact, he's given up exactly three ER in all four of his starts. The bad news is that he's only accumulated 14 1/3 innings over those four starts, resulting in a 5.55 ERA. He has looked progressively better and flashed with an 11-strikeout start against the Rays last week. If it's a matter of working back into form after his knee injury, then Paxton could be a steady riser.

By all accounts, Valdez has been amazing since moving back to the rotation. He's also gotten completely rocked. Let me explain...

Over his last two starts, which have lasted seven and six innings respectively, he's allowed a total of two earned runs on 11 hits with a 14:4 K:BB ratio. His ERA now sits at 1.90 on the young season with a K per inning.

How does one then explain his Exit Velocity and Hard Hit rates in the bottom 3% and xSLG in the 44th percentile? Valdez is in the blue across many Statcast measures, except for two key areas: curveball spin and sinker drop.

The sinker is his primary pitch at a 57.1% usage rate and movement is what we're measuring in this particular column. Somehow, he's getting by with great ratios despite this pitch getting tagged (.354 xBA and .607 xSLG) due to some good BABIP fortune.

It's the curve which is the real star here and he needs to start throwing more to increase the whiffs. Visual evidence below:

Valdez is still youngish at 26 and finding his way on this staff. With all the injuries in Houston's rotation and the recent history the team has of developing young arms work strongly in his favor.