More starting pitchers bite the dust each week and fantasy baseball managers are forced to turn to the waiver wire for streamers more than ever. The other approach is to stock up on relievers and rely on a couple of high-end starters, assuming you have any left. Either way, it's crucial to find pitchers who can contribute in this short season. Wins and saves are completely unpredictable at this point and ratios are prone to massive fluctuations over small sample sizes, so it's only logical to fall back on strikeouts as an indicator of fantasy value.

One could simply look at K% but we're here to dig deeper. Last year, Alex Fast of PitcherList introduced his own metric called CSW% (Called Strikes + Whiff rate) and our own Ariel Cohen has recently dissected this stat with analysis on Whiff leaders and Called Strikes leaders. I'll take a look at some of leaders in this category that may be undervalued and/or widely available on waiver wires.

I am including relievers along with starters this week because if your fantasy teams are anything like mine, you'll take pitching help wherever you can find it.

Let's begin with a relatively well-known commodity, at least among RotoBallers. Karinchak has been one of the top bullpen arms this season, posting a 0.61 ERA, 0.68 WHIP while striking out two batters per inning! He is in the 100th percentile for pretty much every expected stat that exists on Statcast at the moment. He accomplishes this with exceptional spin on both his heater and curve. It has frozen many a hitter in their stance, as he is inducing a ton of called strikes. 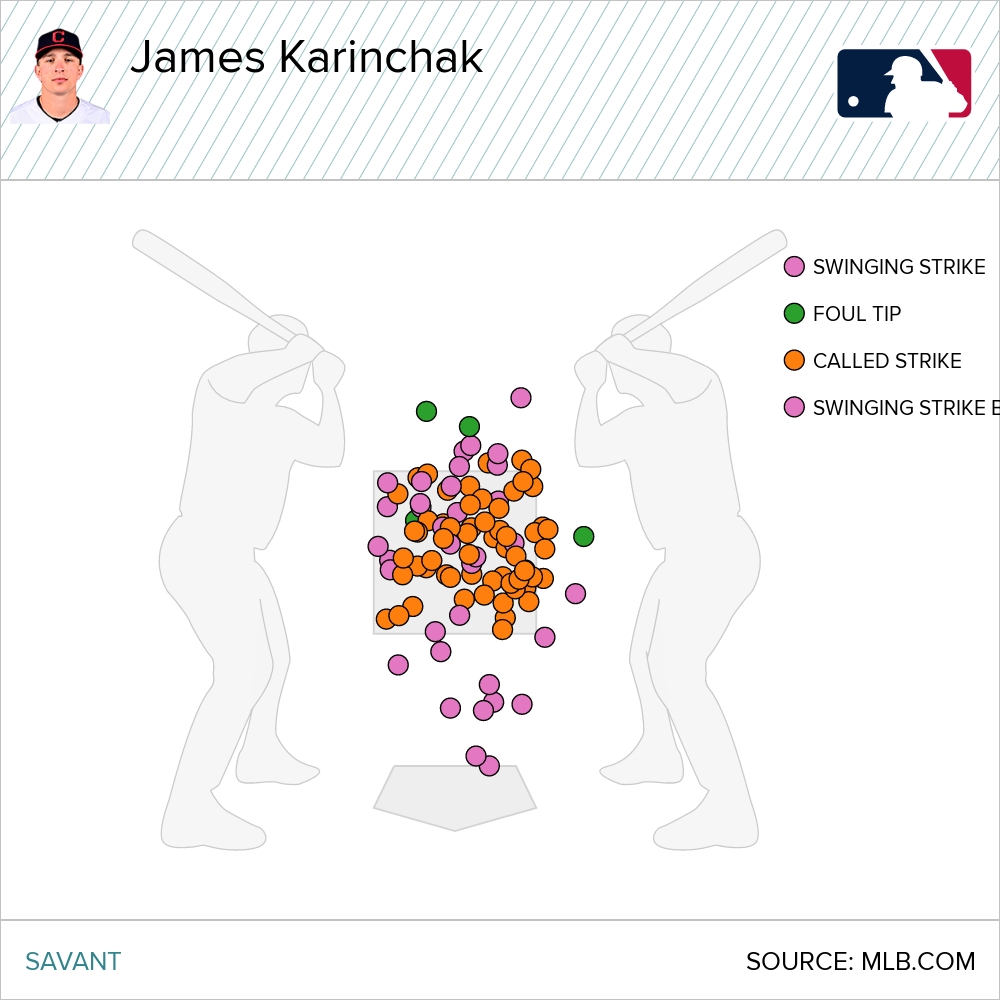 Thus, it's no surprise that he is far and away the leader on the CSW leaderboard. While aces like Gerrit Cole, Max Scherzer, and Luis Castillo are at the 32% mark, Karinchak is a full 10 points higher. He obviously has fewer innings under his belt but he has been employed enough that he is relevant in any fantasy format outside of maybe 10-teamers.

Williams is a rookie who got his first cup of coffee late last year, pitching to an unremarkable 3.95 ERA, 1.76 WHIP, and 14:6 K:BB ratio in 13 2/3 innings of work. This year, he's looking like the next coming of Nick Anderson from 2019, or Corey Knebel from 2017. In just under 10 IP, Williams has 20 K while his ERA and WHIP are both under 1.00. Obviously, the sample size is tiny this year, but these numbers should at least raise an eyebrow.

He's not in the ninth-inning conversation as long as Josh Hader is around, but Knebel has looked rough this year and the door is open for Williams to work his way into higher-leverage situations. He is currently tied for the team lead with three holds so there is already some value in SV+HLD leagues. While veteran Alex Claudio is likely next in line for saves, Williams clearly has the stuff and may be the Brewers' closer of the future, possibly sooner if the Brew crew keeps losing and decides to trade him rather than extend him a contract offer after the season.

Another former Oriole who I've sworn off long ago (hello Dylan Bundy), Gausman has revived himself in the Bay. Gausman is not doing anything different except throwing the ball harder. His velocity is back to 2016 levels after a three-year dip. 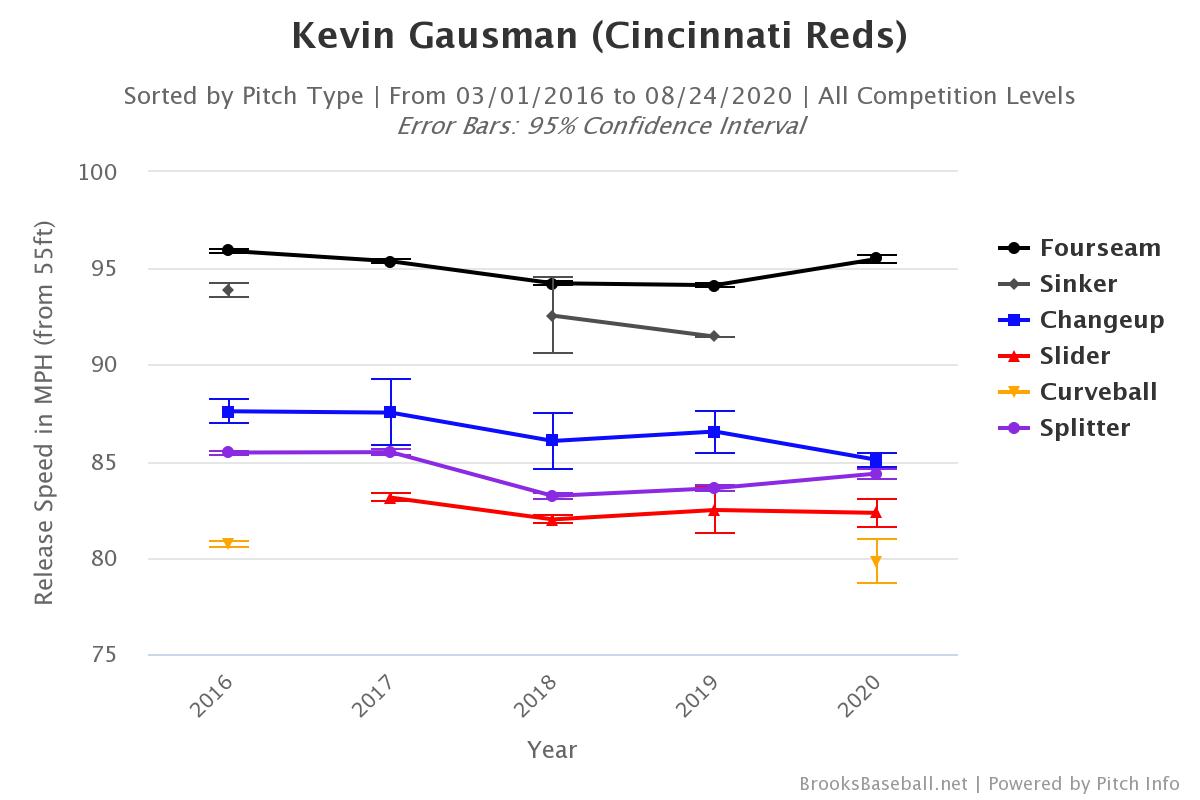 Strikeouts have been plentiful, as his 42 K are ninth-most in the majors, tied with Lance Lynn and Zac Gallen, more than Aaron Nola and Trevor Bauer. The question is whether he keeps it up or not. Even back in 2015-2016 when his velocity was at this level and he was in his mid-20s, Gausman was regularly at a 25% whiff rate. His 32.4% clip seems unsustainable but in a short season, it could stay close to 30% as it did last year.

It looks like many are still skeptical and some may be jumping ship after a rough last couple of starts has raised his ERA up to 4.65. The strikeouts are there and he is only rostered in 28% of Yahoo leagues, so if you are willing to dive in and take a chance, now is the time.

For the following exercise, I'm going to ask you to ignore Eflin's actual ratios (5.12 ERA, 1.55 WHIP) and focus on the xStats (2.58 xERA, .258 xwOBA) and then confuse you further by explaining that his 2020 is nothing like his career stats.

Why such dramatic differences? He's changed who he is as a pitcher. Eflin now uses his sinker more than half the time and it's helped him induce more weak contact while upping his ground ball rate. His 62.5% strand rate may see an uptick even with the whiffs he's inducing because the BABIP on those grounders may rise. This seems like a terrible thing given his already-high ratios.

The real issue Eflin faces is lefties - he can't get them out. If Eflin is facing a predominantly right-handed lineup, he can produce for you in a pinch. If there is more than one lefty slugger in the bunch, forget it. That makes him streamable in his next start against the Braves, riskier against the Nats, and a great start against the Marlins thereafter.

Anderson jumps onto this leaderboard and into the collective fantasy consciousness because of one game, albeit a spectacular one. Just when you thought the complete game was dead, 30-year-old Anderson went the whole nine for a victory over Arizona. He wasn't necessarily dominant, striking out just four batters, but he stymied the D-Backs all game long.

While his CSW is high and ranks in the top 25 with our parameters, his 16.2% K% is far from impressive and won't play in fantasy. This is a case of a crafty veteran getting by with a low BABIP that is almost 60 points below his career average. Moving from Colorado to San Francisco is as positive of a move as can happen for a left-handed pitcher, but negative regression is coming nonetheless.

Another touted Braves prospect ready to disappoint in the rotation? It's too early to say but Toussaint has at least stuck around while Kyle Wright and Bryse Wilson were sent down.

Toussaint has slightly above-average fastball velocity at 94 MPH but his main pitch is his curve, mainly because it's his best one. This season, it has limited batters to a .182 average with a ridiculous 50% whiff rate. His split-finger is almost as effective with a .160 BAA and 38.8% Whiff%. The problem is his slider, which has gotten battered to a .625 BAA and 1.375 SLG. He's allowed more hits against his slider than any other individual pitch type despite throwing it the least at 11.8%. While he could improve it over time, it would be nice to see him increase his two primary pitch usages, as there's not a need to work in something else to keep batters off balance. If it ain't broke...

The good news is that it has gotten better since his first start, as have all his pitches. Of course, he had nowhere to go but down. 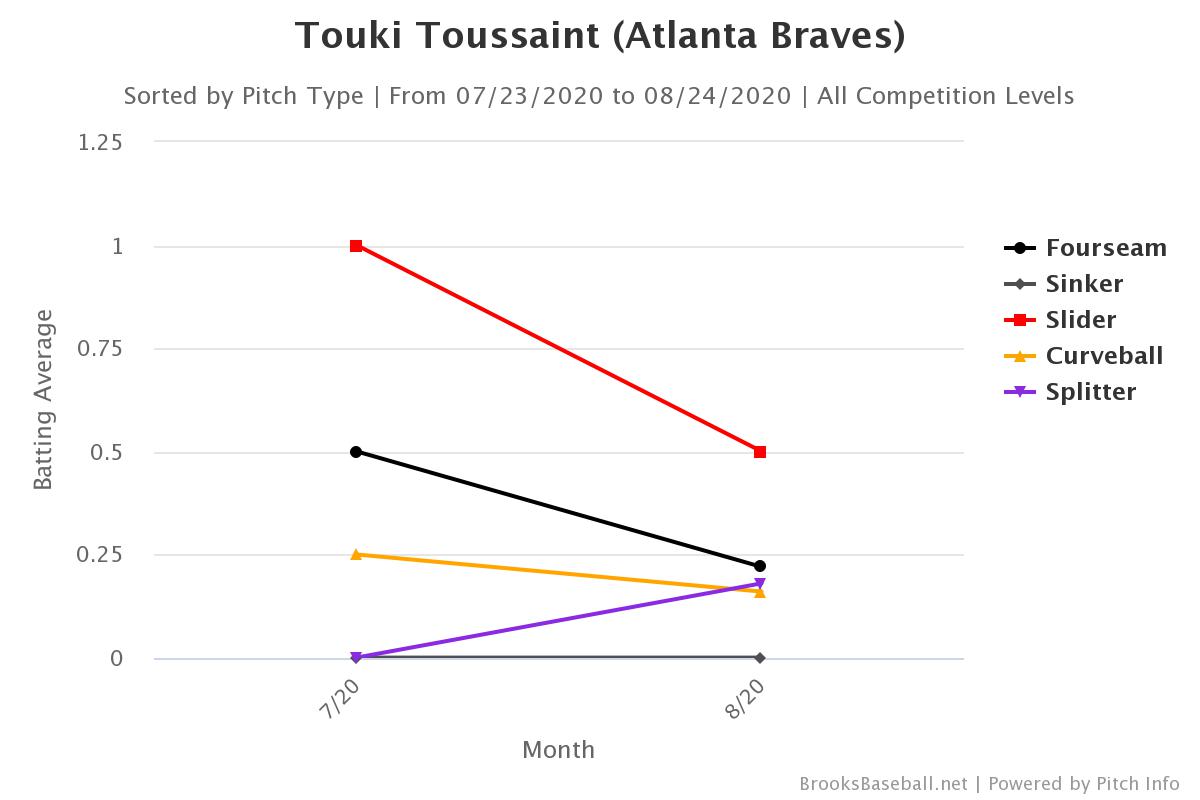 He was lit up in his first start against the Rays and hasn't brought his ERA down much since. Toussaint has limited base hits but has walked too many batters and been done in by the long ball. Consistency with his location is the key and either harnessing the slider or focusing on his primary pitches more will help. He could be a year away from being trustworthy in fantasy unless your ratios are already blown to hell and you just want to pile up Ks.