Skip to the content
Already a Premium Subscriber? Login here

This content is for Premium Subscribers only. You can see our different Premium Tools and subscription options below:

This content is for Premium Subscribers only. You can see our different Premium Tools and subscription options below:

On March 30th, several veteran fantasy football players and RotoBaller contributors participated in a best ball mock draft and there were a few first-round surprises in this one. Diamond Mike went first overall and took Saquon Barkley over Christian McCaffrey. I followed up with Mike after the draft and he told me that he went with Barkley because he has a gut feeling that McCaffrey will regress from his 2019-campaign and he feels a bounce back coming for Barkley. The next surprise came when Joe Mixon went third overall to Warren. After the draft, Warren explained that the return of Jonah Williams and the likely addition of Joe Burrow through the draft has him extremely bullish on Mixon for 2020, but he never seems to fall to him, until now.

The third and final surprise from the first round came at 11, when Mike Florio selected Leonard Fournette. At the conclusion of the draft, Florio commented that he is bullish on Fournette this year because he was third in the NFL in 2019 with 792 yards after contact, he finished as the RB7 in PPR leagues and Florio expects Fournette to improve on the three touchdowns he scored in 2019. Florio wanted to get Fournette, and with an ADP of 21 overall, he wasn’t going to get him on the way back in the third round, so he pulled the trigger on him. Davante Adams going before Michael Thomas could also raise some eyebrows.

After looking these teams, it was apparent that several specific strategies were deployed. There were well-rounded teams, teams that went heavy at RB or WR to start, and then there’s the team that drafted Lamar Jackson in the third. Now I will take a look at some of these strategies and analyze how some of the teams panned out.

The entire draft board can be seen here (click image for full-screen) or you can visit the link here: 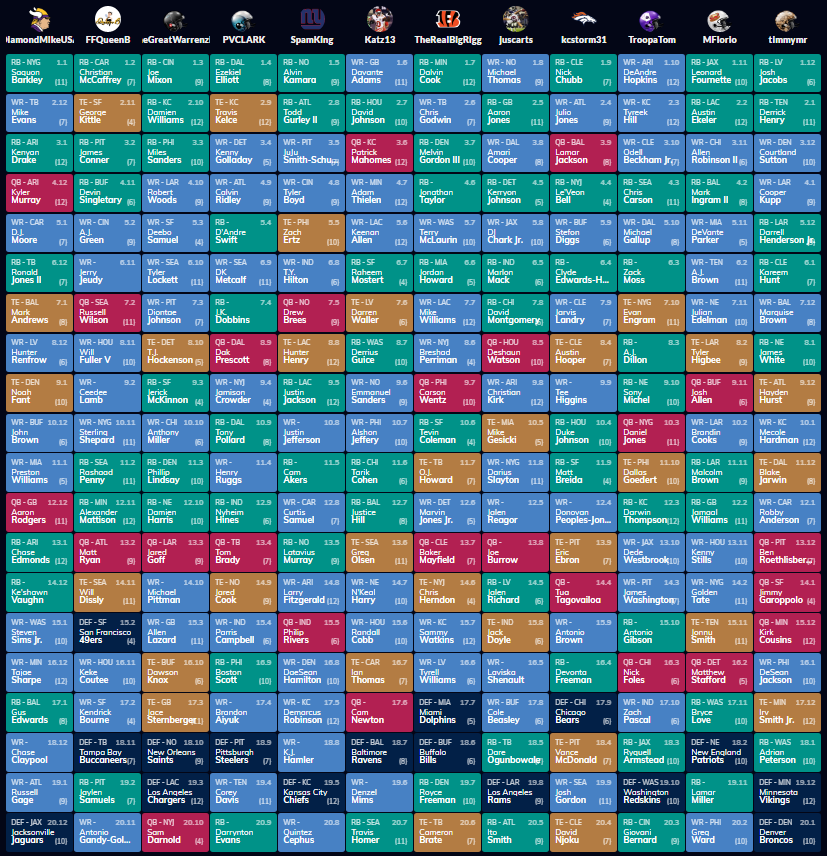 KC was drafting out of the nine-hole and started extremely strong with Nick Chubb at 1.9 and Julio Jones at 2.4. As the third round came back to KC, he had a difficult decision to make. KC needed to decide whether to take one of the less exciting running backs on the board (Mark Ingram or Le'Veon Bell), a wide receiver coming off a poor 2019 (Odell Beckham Jr.) or go with Lamar Jackson at QB, who is coming off a record-breaking season because of his ability to run the football. KC went with Lamar Jackson, and here is how his projected starting lineup shook out:

When the dust settled, KC’s starting lineup appears to be very good. However, when you take a quarterback early in a draft, you miss out on drafting quality running backs and wide receivers in those earlier rounds and you must hit on some guys in the later rounds. In KC’s case, his depth is a little shaky as his bench running backs include Clyde Edwards-Helaire, Duke Johnson, Matt Breida and Devonta Freeman who isn’t currently on an NFL roster. Outside of KC’s starting wide receivers, only Tee Higgins and Donovan Peoples-Jones are likely to play this year, with both Antonio Brown and Josh Gordon currently on the street. In summary, the starters look good, but the depth is troubling.

My buddy Warren drafted from the third spot and went with Joe Mixon. Warren opted to go with Mixon third overall because he’s extremely high on him this year and this was the first draft where he actually fell to him. Warren followed up the Mixon selection with Damien Williams and Miles Sanders before Warren started taking the best wide receivers that were still available. When it was all said and done, Warren’s projected starting lineup ended up looking like this:

Warren ended up with very strong running backs, each of which are capable of popping off long runs and will see considerable volume this year. Although this group of wide receivers lacks a legitimate WR1, they are pretty solid from top to bottom, and he did draft Diontae Johnson who is a big-play threat and Anthony Miller at 10.10 which could end up being a great pick if the Bears are able to throw the ball better in 2020. The weakness of this team is clearly the quarterback with Jared Goff projected as the starter and Sam Darnold on the bench. Warren took Jerick McKinnon at 9.3 when he could have had Carson Wentz, Josh Allen, Daniel Jones, or even Aaron Rodgers who went at 12.1.

Over the last few years, there have been tight ends like Rob Gronkowski, Travis Kelce and Zach Ertz who have dominated at the position and as a result, they shot up draft boards the following year. In 2019, Travis Kelce was clearly the best tight end in fantasy football, and so far in 2020 drafts he has an ADP of 22 overall. Rotoballer contributor Phil Clark took Kelce at 2.9 in this mock draft, and constructed the following projected starting lineup:

Phil’s running back depth ended up a little light and unproven, but he did lock up two of the most talented rookie running backs that are entering the league this year in D’Ande Swift and J.K. Dobbins. Additionally, Phil was able to lock up Zeke Elliott’s handcuff, Tony Pollard, which gives him some security at the position. If Phil had waited to draft a tight end until the ninth round, he could have had either Hayden Hurst or Mike Gesicki instead of Jamison Crowder who he did select in the ninth. Instead of Kelce, Phil could have drafted Mike Evans, Kenny Golladay, Damien Williams or Kenyan Drake in the second round which would have made his team better at RB or WR. At the end of the day, Phil put together a pretty solid team, but if you’re going to draft a tight end early, you better have a plan to draft solid depth at the other positions in the later rounds.

My guy Troopa Tom went with DeAndre Hopkins, Tyreek Hill, Odell Beckham Jr. and Michael Gallup with four of his first five picks. Tom took his first running back, Chris Carson, at 4.3 and his projected starting lineup looks like this:

At first glance, Tom’s running backs look poor, but if you take a step back, he may be alright at the position. Chris Carson has gotten a bad reputation because of injuries the last few years, but he did rush for over 1,200 yards in 2019 before he went down for the season. Tom selected Zack Moss and A.J. Dillon as his RB2 and RB3 and if those guys get drafted to a good situations, they could have decent rookie campaigns. Sony Michel was drafted at 9.10 and this is the pick that could really make Tom’s team, because if he rebounds after being a bust in 2019, he could help solidify a lineup filled with stud wide receivers.

Both of these squads are lights out. Spam King’s starting lineup has proven players at every position and has a solid bench with Cam Akers, Curtis Samuel, Latavius Murray and Philip Rivers. Justin Carter has similar depth as he was able to draft Kerryon Johnson and David Montgomery, two running backs that had disappointing 2019 seasons and both could bounce back in a big way. He was also able to get some young, high-upside wide receivers in Christian Kirk, Darius Slayton and Jalen Reagor.

Best ball drafts are often won by the picks made towards the end of the draft. Based on what we know at the moment, here are each team’s best picks coming in the 10th round or later:

Diamond Mike – Steven Sims Jr. 15.1 – Towards the end of 2019, Steven Sims showed the ability to break the long play, even with poor play from the quarterback position. Sims may take a step forward in year two, the quarterback play should be better, and his big-play ability makes him dangerous in a best-bell environment.

FF Bonnie – Will Dissly 14.11 – People may forget about Will Dissly since the Seahawks signed Greg Olsen this offseason. Even with the presence of Olsen, Dissly could be a touchdown monster.

Warren – Jace Sternberger 17.3 – Jimmy Graham has departed Green Bay giving way for Jace Sternberger who has potential to break out. The Packers haven’t had a great fantasy tight end since Jermichael Finley.

Phil Clark – Corey Davis 19.4 – Corey Davis has been labeled a bust and he struggles against man-to-man coverage, and he plays in a run heavy offense which makes it difficult to predict when he will come through. In a best-ball setup, you don’t need to worry about the lineup decision, so you will get the points the one or two times he blows up in 2020.

Spam King – Latavius Murray 13.5 – Murray has some stand-alone value because he’s capable of scoring any given week, and he has added value to Spam King because he drafted Alvin Kamara.

Katz – Tarik Cohen 11.6 – Tarik Cohen doesn’t carry the ball much and does most of his damage in the passing game which is difficult to predict. In a best-ball setting, you will get Cohen’s points when he blows up.

Big Rigg – Sammy Watkins 15.7 – Sammy Watkins is one of the most physically-gifted wide receivers in the NFL, but he disappears at times. Once again, in a best ball, you don’t need to set the lineup, so if you have him, you will get his good games.

Justin Carter – Darius Slayton 11.8 – Golden Tate is aging, Sterling Shepard and Evan Engram are seemingly always hurt, which may leave Darius Slayton as the number one receiver for the Giants.

KC – Eric Ebron 13.9 – Ebron is touchdown-dependent and he will be playing with a great quarterback which is something he didn’t have in 2019.

Troopa Tom – Nick Foles 16.3 – Nick Foles and Mitch Trubisky are in a true position battle for the starting job in Chicago, and if Foles wins it, he could put up big numbers in the Nagy offense.

Mike Florio – Kenny Stills 13.11 – Best ball was created for players like Kenny Stills. Stills will get hurt, he will be unreliable, and just when you give up on him, he will catch five balls for 165 yards and two touchdowns. If he’s on your best ball roster, you don’t need to worry about giving up on him.