Today, we'll look at four "speed" players as identified by our site projections. Stay tuned over the next few weeks as we bring you a deeper look at undervalued and overvalued players from each position using Expected Draft Values.

Analysis: Smith’s production is so skewed towards steals that it makes him difficult to analyze against historical data. I understand you may simply need his bags, but hopefully this sheds light on the value you’re surrendering. You’re trading seven homers and over 40 points of batting average, as well as 12 R+RBI for 26 steals. He becomes a singular point of failure for your bags. Ask yourself, is it worth it?

Well, no. I understand roster construction can demand it sometimes...but it remains a poor move. Just look at these crummy sabermetrics:

There's also the fact that Smith is likely stuck in the nine-hole for Seattle, limiting his PAs. A burner like him needs volume to generate value, especially without a strong on-base percentage. If Kyle Lewis and Jake Fraley shine, Mitch Haniger returns later on, and Jarred Kelenic forces his way up then Seattle owes neither Mallex nor your fantasy team additional chances.

Analysis: I promise I don't hate the Mariners! Since Gordon swiped 60 bags for the Marlins in 2017, his stock has fallen mightily. I’m here to tell you that despite the nearly-nonexistent price tag, you’re still overpaying. Gordon went 22-of-27 on steal attempts over the course of 421 PAs in 117 games last season, but the aging curve is showing. 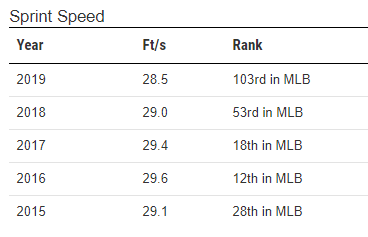 Then there’s playing time, as Shed Long is set to man the keystone (and leadoff) while the outfield is Kyle Lewis, Mallex Smith, Jake Fraley, Tim Lopes and Gordon. And while it’s far off now, Mitch Haniger may take a full-time role later on. Several projection systems have Gordon around 300 PAs, with ATC near 400. Similar speed lines can be found with Manuel Margot and Delino DeShields Jr. a whole 100 picks later.

Analysis: Look, the injury woes are baked into the projection here. I understand “the market” may have additional trepidation, but 10 HR/14 SB in only 87 games (295 PAs) last year underscores the potential. Let alone his place in a stacked Minnesota lineup. Systems like THE BAT and Depth Charts are even more bullish than us on Buxton’s power, with his plus speed respected across the board.

Even with some give on batting average, you’re scooping a sizable increase in the other four categories. After posting average exit velocities around 85-86 MPH with a launch angle orbiting 12-13 degrees from 2016-18, those figures jumped to 89.3 MPH and 19.5 degrees in ‘19.

Analysis: Goodrum is on pace to start the year as Detroit’s everyday shortstop, but has insane versatility that allows him to fill in wherever needed. Goodrum delivered a 12/12 season in just 112 games last season, with 15/15 available on the cheap in 2020. If you’re taking a speed guy at this stage in the draft, your expectations are nonexistent in the power department.

I will note he's one of those that traded contact for an increase in power. He upped his average exit velocity from 87.7 MPH to 89.3 MPH while increasing his launch angle from 10.8 degrees to 13.2, but his strikeout rate rose from 27% to 29.2% as his zone-contact rate dropped from 83% to 80.6%. A bit of an aside, do take note Goodrum's wild splits by handedness.

In 221 career ABs against left-handed pitchers, he's hitting .321 with a .406 BABIP and only two homers, 12 doubles and five triples. Compare that with 663 ABs against right-handed pitchers, against whom he's hitting just .217 (.288 BABIP) but has 26 homers, 44 doubles and three triples, accounting for a 66-point ISO gap. Small-sample size alert, yes, but his fly-ball rate against right-handers (36.7%) is nearly double that against southpaws (20.9%), which corresponds with greater power and lower average. Pay attention early to his approach against pitchers and we'll see if he gets platooned, though Detroit currently has no obvious platoonmate.

All-in-all, Goodrum gives you both playing time and double-digit pop with the modest wheels. Given Detroit’s lack of infield prospects that could push Goodrum for playing time -- go away, Willi Castro -- it’s not shocking that many projection systems are calling for 600-plus PAs. I can see Travis Demeritte edging into the outfield, but not the middle infield. With 84th-percentile split times in the 90-foot window and strong success in picking his spots (24-for-31 in the last two years), the green light should be Goodrum's and yours.