It's never too early for some fantasy football rankings, right?

We here at RotoBaller firmly believe that, which is why we've already done rankings for the 2020 season. Standard. PPR. Dynasty. (Click the word "dynasty" to go see our complete dynasty rankings.)

But what are rankings without some kind of context by which to understand those rankings, a way of figuring out what all of those numbers and names and tiers and so on all mean? That's why I'm here today. We're going to look at our dynasty quarterback rankings and then try to make sense of some of the most important things about the rankings. Ready? Scroll on down!

Four players are listed in our first tier, though it seems more fair to say that there should be a Tier One and a Tier 1.5, because the top-two dynasty quarterbacks have such an unassailable grasp on those positions.

Patrick Mahomes checks in as our overall QB1 and is 35th overall in our dynasty rankings. Lamar Jackson trails him by one spot at the quarterback position and two spots overall, coming in as our 37th player overall. (If you're curious, they're divided in the overall ranks right now by Calvin Ridley.)

I love the conversation about these two quarterbacks because both have a strong argument for being the first quarterback taken, even if only one of our five rankers had Jackson above Mahomes.

Mahomes checks in slightly higher because we've seen him sustain his level of play over a two-year window, and because his style of play is a little bit safer than Jackson's, even though it was Mahomes who missed time with injury last year, not Lamar.

I think the thing with Mahomes is that we have a good sense of him still being effective if he's not able to get out and run. In his first game back from his knee injury, Mahomes didn't have a single rushing attempt, but he threw for 446 yards against the Titans.

Jackson is such a smart runner who avoids contact well, but rushing production is such a big part of his game that there's a little more risk in Jackson, even if his ceiling is higher than Mahomes's ceiling. But you can't really go wrong with either guy.

Two other passers make our top tier. Dak Prescott checks in as our QB3. I think our whole rankings crew is assuming that the Cowboys get a long term deal done with Prescott at some point, because as long as he's in this Cowboys offense with Ezekiel Elliott, Amari Cooper, CeeDee Lamb, and Michael Gallup, Prescott will be in a great position to have sustained success.

Kyler Murray rounds out this tier. Murray threw for 3722 yards and 20 touchdowns as a rookie while also running for 544 yards and four touchdowns, and the Cardinals added a top wide receiver for him in DeAndre Hopkins, which should help Murray boost himself into the next level in 2020 and beyond.

And while we're talking about Hopkins...

Quarterbacks Who Are Trending Down

...let's talk about the quarterback who Hopkins is leaving. I think everyone assumed that DeAndre Hopkins would be a Texan for a long time, but with the Texans trading him away, Deshaun Watson dropped from third in our rankings down to fifth in this latest update. An extremely talented passer, Watson just doesn't have that top-tier wide receiver to throw to anymore, which lowers his fantasy ceiling. Throwing to injury-prone guys like Will Fuller and Brandin Cooks isn't a great recipe for success, and while Watson's still a good quarterback to roster, we're not quite as high on him as we were last year.

Ryan's dropped down to the 11th spot in the rankings, mainly because he's about to turn 35. Did y'all realize Matt Ryan was that old?

But Ryan's still a good value over the next few seasons. Ryan's not been the most consistent fantasy player over the last few years of his career, but he's had a lot of highs: 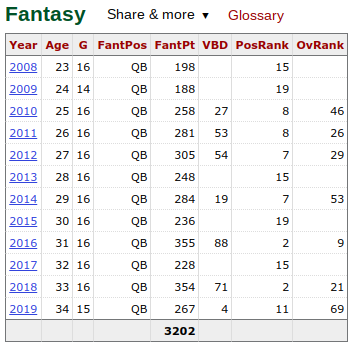 Obviously, finishing outside the top-10 two of the last three years isn't great, but he's also finished as the overall QB2 twice in the last four years, so obviously Ryan has the ability to perform like the best of the best. He's a deteriorating value in dynasty leagues, but for owners in win-now mode, he's a pretty good value right now, even as he trends down.

The Aaron Rodgers era in Green Bay might finally have an end date. With the drafting of Jordan Love, Rodgers presumably only has another year or two (probably two, based on his contract) before he's either forced to retire or find a new team. That uncertainty -- combined with his struggles in 2019 -- have Rodgers at his lowest dynasty value...ever?

Cousins continues to see his value drop as he ages and as his performances remains stagnant, but...he's still finished as a top-15 quarterback in both of his Vikings season. Minnesota isn't really built for Cousins to put up fantasy stats like he did in Washington, but he's still a solid quarterback who can definitely be a viable QB2 option in dynasty leagues, even if he continues to drop in the rankings year after year.

This is what happens when you get replaced by Nick Foles. Trubisky's free fallen down the rankings over the last few years for very valid reasons.

Yeah, Rosen's probably done at this point. Too bad I have him in most of my dynasty leagues!

Where The Rookies Ranked

The only rookie that we have as a QB1 in our rankings is, of course, Joe Burrow.

There's a lot to like with Burrow. He's an accurate passer who just had arguably the greatest passing season ever for a college quarterback. He joins a Bengals team with some good offensive weapons and a pass-happy approach. The only real question mark with Burrow is whether or not his huge one-year rise at LSU was because of his own skill or because of the coaching of Joe Brady. We're betting that it's because Burrow's a future NFL star.

Tua was supposed to be the first quarterback taken this year in the NFL Draft, but a hip injury ended his season for Alabama prematurely and saw him fall a few spots on draft day. Injury concerns are real here, but a healthy Tagovailoa would give the NFL something it hasn't had in a while: a successful lefty quarterback. He's got some good players around him in Miami's wide receiver and tight end room, and this seems like a pretty good ranking that balances his immense upside with the potential for an injury-shortened career.

Herbert has a good arm, but there are concerns about his accuracy. Still, getting him at QB22 in a dynasty start-up feels like really good value. He's a dangerous runner and if he can just get more consistent with his throws, Herbert could be a solid quarterback for the Chargers. I don't think he winds up as a top-10 quarterback in the league, but if he hits, he's a solid fantasy QB2 with upside who'll never be cheaper than he is now.

What to do with Jordan Love. Strong arm and good mobility, and he'll get to sit behind Aaron Rodgers and hopefully fix his accuracy issues. But sit is the key word here. Barring injury, do we see Love before 2022? That's why he's QB32 in our rankings, as there's upside, but there's also no immediate path to snaps, and while dynasty rankings are partially about the future, they're also partially about the present, and Love's present doesn't really exist.

We're too high on Hurts, right? A talented college quarterback with an intriguing skill set for the next level, Hurts found himself in a terrible position, drafted to back up Carson Wentz. But Hurts has the wheels to find some early usage as a gadget player and the arm strength to eventually land a starting gig, and he'd be a solid fantasy QB2 with upside in a future scenario where he was a starting NFL quarterback. And really, once you're past Derek Carr at QB31 -- someone we're probably way too low on, by the way -- you have a pretty steep drop off to irrelevancy, so if you're drafting the 33rd quarterback available, why not take the risk on Hurts? You wouldn't rather have Mitch Trubisky, right?

Here are some non-rookie players ranked outside of our top-12 who have a decent chance of one day breaking into our top-12.

This feels like cheating because Jones is a second-year quarterback who is already ranked as the QB14, but moving up a couple of spots is still a tough task. Jones really outperformed my expectations for him last season. He struggled in things like accuracy -- 23rd among quarterbacks in accuracy rating, 28th in true completion percentage -- but did a good job when pressured. He needs to push the ball down the field more, but if the Giants can protect Jones better, he could be the team's long term answer to the question "who replaces Eli Manning?" and not just a future bust who the team moves on from in 2022.

The Broncos added major weapons for Drew Lock, who now mans an extremely interesting offense. Melvin Gordon II. Courtland Sutton. Jerry Jeudy. Noah Fant. This is the kind of offense that sets up nicely for a solid NFL quarterback to walk right into a top-12 fantasy finish with, year after year.

The problem is we don't know yet if Lock is a solid NFL quarterback. He started five games as a rookie, averaging 204 yards per game and tossing seven touchdowns against three interceptions. There were definitely signs of future success there, and 2020 will teach us a lot about Lock's future. If he continues to show the same kind of growth he did at the end of his rookie season, he'll be ranked much higher than QB18 in next year's rankings.

This is a long-term play here, as Winston enters 2020 as a backup quarterback. But last year's fantasy QB5 is only going to be 26 this season, and if 2020 really is Drew Brees's final season, a strong showing from Winston in preseason/practice/potential starts if Brees is hurt could mean a chance for Winston to be the future starter for a Saints offense that we know is built for offensive production. A dynasty owner who's looking firmly towards the future could get a really good deal here with Winston.