It was a circuitous route to get here, yet after a season chock full of potential landmines, the 2020 World Series kicks off Tuesday night. After a pair of thrilling Game 7’s left it feeling like it could have easily been the Astros and Braves taking to the diamond to crown the sport’s best in a season unlike any other in history, we get the analytically-minded Rays squaring off with the title-deprived Dodgers in a collision of baseball’s premier squads.

With that comes the fact that multi-game slates, they’re done; kaput. Pitchers? They’re out, too, at least on FanDuel. Instead, we’ve got FD’s version of what they rolled out for the NBA Finals, headlined by an “MVP” and a “STAR.” Price tags don’t change for any of these roles, so there’s less salary cap maneuvering and more slotting in each individual fantasy managers’ favorite bats.

This article will provide you with my daily fantasy baseball lineup picks for DraftKings on 10/20/20. The lineup picks will range from some of the elite players to mid-priced options and value plays. Be sure also to check out all the Vegas Odds for today's slate. You can also read more DFS advice and lineup picks for sites like FanDuel, and other sports. If you have any questions or comments, feel free to hit me up on Twitter @davithius.

With stagnant price tags, if you’re keen to roster Arozarena, it’s virtually improbable to not see him in the MVP or Star slot. His first taste of the postseason has been historic with seven home runs already to his credit, while he closes in on the record for most hits in a playoffs by a rookie. Facing Clayton Kershaw is a less than optimal head-to-head showdown, but surprisingly, it’ll be Kershaw who will have to adjust to Arozarena’s staggering output, a turn of fortune that would have been inconceivable before the playoff bubbles were arranged. Having amassed a 1.288 OPS in 55 postseason at-bats, getting the Rays’ breakout star at a price tag that is third-highest on the board is undoubtedly worth consideration.

Much in the same ilk as Arozarena, those eyeing Betts are likely to slot him in at one of the additional bonus slots, making the Dodgers’ wunderkind two-way star a sound choice at Star. Set to square off against Tyler Glasnow to begin the proceedings for L.A., Betts shouldn’t be wary of Glasnow’s limited pitch mix, as the Dodgers’ leadoff batter mashed heaters to a .620 SLG during the regular season, accounting for 20 extra-base hits. Of course, Glasnow is a different breed of heater in his own right, but Betts retains top shelf value due to his spot in the order and propensity for scampering around the basepaths. With stacks somewhat antiquated from a DFS perspective, taking the best bat available is always a method worthy of consideration.

Coming into the NLCS, Turner’s bat was uncharacteristically silent. Yet, over the seven games, he played an unheralded role in providing consistent production out of the No. 3 spot, scoring a run in each of the last five contests. Collecting 10 total bases and three walks in that span, Turner has been the catalyst at the heart of the Dodgers’ order and finds his price tag either alongside true boom-or-bust selections or below bats that have been scuffling as of late. The last time Turner played in the World Series, he reached base at a .385 clip.

Renfroe didn’t exactly hit left-handed pitchers with consistency during the regular season, producing a .146 average. So why are we discussing him, you may ask? He walloped five home runs against southpaws over the 60-game slate before socking a grand slam in the postseason. During 2020, Renfroe has delivered a .669 xSLG on fastballs from lefties and a .525 mark against breaking pitches. The five-player nature of the Game 1 slate means that for as coveted as points will be, there will need to be an upside play somewhere, and Renfroe is a sound bat to target for those interested in such a strategy.

It took all of one day of World Series action for the Brosseau versus lefties recommendation to appear. Any frequenter of DFS columns here at RotoBaller knows our staff’s general affinity for Brosseau when facing a lefty, and with good reason -- he produced a 1.121 OPS against left-handers in 2020; then come the postseason, he blasted a homer off Aroldis Chapman to advance his club to the ALCS. With his price tag held in check by his platoon-capped playing time, Brosseau should benefit from -- if nothing else -- facing Kershaw at least twice. The Rays’ utility infielder would derive considerable upside from batting leadoff, which manager Kevin Cash may opt to deploy. (Manuel Margot could also earn those honors, in which case, he too could be in play.) 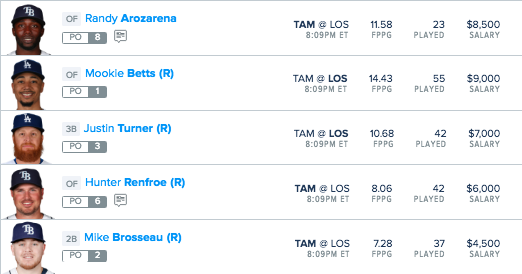 Please note that these are sample lineups designed only to show how you might use the above lineup picks in your own lineup. You should always check the weather and lineups before they lock to ensure players you are choosing are playing tonight.