With the cancellation of nearly every sporting event in the county, daily fantasy sites have had to get creative with offerings. That is certainly the case with FanDuel as they have introduced "NBA SIM leagues".

Premise: Just like every NBA contest on FanDuel, you will pick two point guards, two shooting guards, two small forwards, two power forwards and a center while staying under the $60,000 cap number. However, there is one big difference, the points each player accrues are a random draw from the games that player has played during the season.  The player pool is a bit limited as players must have had at least 15 games played with over zero fantasy points played on the season. Also very key, THE MATCH UP IS IRRELEVANT. This is not a simulated game between the teams shown, this is just the players who are available on this slate. Each player will be assigned a number, say for example 12, the stats from that players 12th game will then be used to total his fantasy points.

Players: The players are priced strictly based on fantasy points per game, while those are the averages, there will be players who are more volatile than others. It is also key to note that not everyone has played the same number of games, which could change the "value" of a player. LeBron James for example has a 60 game sample to pick from, while someone like Kyrie Irving only has 20 games to pick from, so the odds of a Kyrie game being the one picked is 5%, while the odds any specific LeBron game will be picked is 1.6%.

Trae Young: Young is nowhere near the safe play that a LeBron James or Anthony Davis is, but in this GPP only format, Young has immense upside. In his 60 games, the Hawks point guard has 20% of his games where he hit at least 60 fantasy points. A one in five shot at that is a nice way to start your lineup.

Kyrie Irving: Irving is a lot different than most of the other top options as he only has 20 games to choose from, which means any one game has 5% shot to get picked. With six games (30%) over 60 fantasy points, Kyrie would make for another top option next to Young.

James Harden: Day one of this contest saw Harden go for just 27.1 points, is lowest total of the season. That lowered his ownership despite the fact that he has as much upside as anyone on the slate. It is only a $200 difference between him and Giannis, but he has more 80 point fantasy games as well.

Zion Williamson: Anytime Zion is on the slate, he will be a lock and load in all my lineups. At $6.6k, he has at a minimum hit 3.9x his price. Anytime you can lock in 26 points, with upside for 50, you have to take that.

Jonas Valanciunas: Valanciunas is another player who has a big ceiling with a relatively high floor. In 62 games he only ha seven games under 20 fantasy points, while also bringing in 11 games over 7x his value. Center is strong, but he possesses high upside at a lower price than the other top options.

Lonzo Ball: Ball would be considered a "cash game play" as his 56 game sample includes 31 games over 5x his value. He also has six games over 50 fantasy points, giving him over a 10% chance to hit a monster game.

Cam Reddish: Reddish is the definition of a high risk play who could shoot you up to the top of the GPP, while also having the possibility of destroying your lineup. He does have four games over 9.5x his salary tonight, and if you are looking to win big cash, would be a player not many look at who has massive upside.

De'Anthony Melton: While Melton does only have one game over 10x his salary, he is one of the safer plays in this area. Of his 51 game sample, only nine games are under 3x his low salary. For $4k, you will not find many options who have  84% chance to get you at least 3.2x his price.

Mo Bamba: When we get this low, we are looking upside, knowing that there is some inherent risk of a disaster score. It is worrisome that 20% of his game totals are under 10 fantasy points, but to counter that, he has eight games over 7x his salary. Being in a stacked center position, he is likely to be under 5% owned. 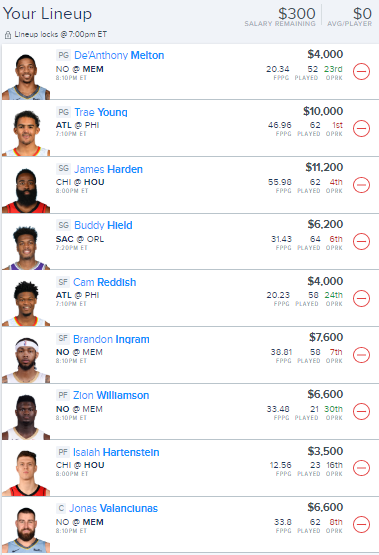