The kid has been on an absolute tear since getting the everyday job in San Diego. The 26-year-old Jake Cronenworth was acquired from the Tampa Bay Rays this offseason. He has been worth every bit of it.

He was a speed-first prospect prior to 2019. Cronenworth posted double-digit stolen bases every season from 2015 through 2019. The power just developed last season as he eclipsed double digits, barely, with 10.

In 2020, he is boasting a triple slash of .347/.410/.627. and compliments that with offering the power and speed combination with three home runs and a stolen base on the season. However, there appears to be a lot that suggests this could be more than just a hot streak.

Unfortunately, there is no MLB track record. Currently, Cronenworth is sporting a 13.3% strikeout rate and a 9.6% walk rate. The strikeout rate is good enough to rank inside the top 8% of the league. These rates are fantastic and really show how good of an eye for the ball Cronenworth has.

This almost mirrors the 12.1% walk rate and 15.3% strikeout rate he posted in Triple-A last season. Although it was just 88 games, it shows the plate discipline and eye for the ball has been there. In fact, the last time he struck out over 20% of the time (which is still better than league average) was in High-A back in 2016.

Currently, the ISO is .280. However, power has never been his game. We did see the growth in power begin last season with an ISO of .186. The wRC+ is way above average as of now as well at 169. He has fluctuated above and below 100 at various points in the minors but going back to his 2019 Triple A stint, it was 143. Again, the recent track record is in his favor. At age 26, he could finally be filling out and entering the prime all at the same time.

The first thing to look at is the ground ball rate. It is higher than we would like to see at 40.6% but it has improved since 2019's 49.8%. Ground balls are not ideal, but with a plus speed tool (91st percentile sprint speed) he can get away with a higher ground ball rate. The 31.3% line drive rate will also play well to the batting average. The fly ball rate is an uninspiring 28% but with the line drive where it is at, along with the speed, it will lend itself well to a good batting average.

Cronenworth has also applied a more pull-heavy approach. His pull rate is 43.8% and his Cent% is 37.5%. The pull-heavy approach will help sustain the power gains we saw in 2019 and could lead to the higher outputs. We see the HR/FB rate increase in 2019 to 12.2% and it has also improved further in 2020 to this point and sits at 16.7%. The arrows continue to point upward.

Jake Cronenworth walk rate and lack of strikeouts to this point are supported by the plate discipline metrics. The lack of swing-and-miss is apparent in the SwStr%, which is only at 5.7%. Pair that with a whiff% of 18% and it speaks volumes of the hit tool. As mentioned before, the batting eye is also really strong. He does not swing at much outside the zone at all (O-Swing%: 20.8%). This is 9.1% better than league average.

Jake Cronenworth is hitting both LHP and RHP very well. His triple-slash verse RHP is .350/.418/.683 and he literally walks (10.4%) as much as he strikes out (10.4%) against RHP. That is impressive. He also has hit LHP well to this point. The triple slash is .333/.375/.400 and is accompanied by a 117 wRC+. The concern is the strikeout rate against LHP of 25%. This is not terrible but if the rate increases, troubles could follow. The contact skill he flashes should hold the strikeouts back from being much worse but it is worth monitoring.

Cronenworth has also been pretty successful against all types of pitches.

He is batting over .300 on fastballs, breaking pitches and offspeed pitches with expected batting averages in-line or better for each. There is also signs of power potential as well. It is hard to completely buy that due to the track record. 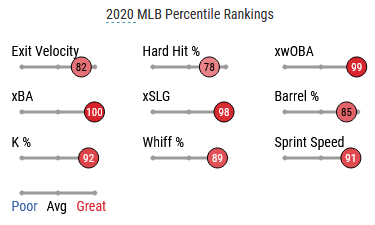 Look at all that red! This is what we like to see. It helps back up the production just a bit more:

These numbers further suggest he could still improve. Again, that is tough to do considering how great he has been but at least it shows he should sustain a good amount of the production moving forward. Cronenworth has a barrel rate of 15.6%. This is good enough to be in the 85th percentile and among the 186 hitters who have at least 50 batted ball events (or BBE), Cronenworth ranks 20th. This is further supported by a 50% sweet spot percentage. This rate leads the league of players with at least 50 BBE.

Cronenworth's max exit velocity of 110.1 MPH is better than Brandon Lowe and Hunter Renfroe to name a few. Both of whom are known for their power. Where the power takes a small hit is the average exit velocity on fly balls is 89.9 MPH. It is not bad but it is a reminder that the balls he hits in the air, on average, are not hit as hard as balls he hits elsewhere. Essentially, for what Cronenworth lacks in raw power, he makes up in the hit tool and quality of contact. This combination can help the power play up.

This is where the plate discipline and quality of contact come into play. He can afford to sit on his pitch or preferred location or hit mistakes pitchers leave over the plate when they try to attack the outside part of the zone. 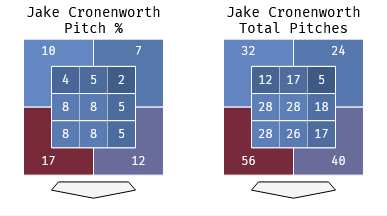 We discussed his lack of chasing pitches outside of the zone, so as long as remains patient and willing to sit on pitches, attacking the outside half may not work as well as pitchers think it will. But as of now, this is exactly how pitchers have attacked him.

It is not like he can’t hit balls away. He only really struggles on pitches thrown low-and-away. Cronenworth is hitting .182 in said zone. It’s an even uglier .167 on pitches low, away and out of the zone.

Another positive sign is when he does hit the ball, he manages to produce positive launch angles all over the zone. 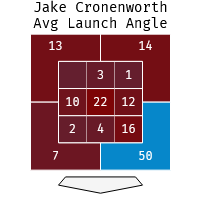 This will help sustain the line drive rates as well as the quality of contact we are seeing early on.

Ultimately,  it has also been a small sample, but guess what? A 60 game season as a whole is a small sample. Pitchers would typically get a chance to truly adapt and the holes in the game would be exploited a bit more but with the constant chaos that is this short season, I don't anticipate there being enough time to adapt fully and that the hot run could last for the remainder of the 2020 season. Beyond 2020, there is enough here in the profile to really buy in moving forward as well and the price in dynasty formats are not as steep as we would expect. Buying high in this situation might be the smart move because the stock could continue to rise.