As fantasy football players and NFL fans, every year we get excited about the NFL draft. It is a time of hope where a franchise's luck can change for the better or for the worst. This rings especially true for the teams that decide to select a quarterback. The starting quarterback of an NFL team is the face of the franchise and the player that can make or break an offense.

In the 2020 NFL draft, we saw four quarterbacks go in the 1st round. Monitoring these rookie quarterbacks throughout the season will be vital for fantasy owners as they can completely change the outlook of an offense. In our Rotoballer rookie rankings, we anticipate a few of these quarterbacks to be fantasy relevant.

Today we'll be taking a look at one of those quarterbacks in Justin Herbert. Justin Herbert played four years as a starter at Oregon, playing in 43 games and totalling some very strong numbers: completing 64% of his passes for 10,541 passing yards, throwing 95 touchdowns, and only having 23 interceptions during his time. On April 23, 2020, the wait was finally over to find out where hyped draft prospect and quarterback would be playing, with Herbert being selected sixth overall by the Los Angeles Chargers.

Herbert's accuracy and throwing ability are interesting because when given a clean pocket he has proven to be one of the most accurate quarterbacks in his draft class. In fact according to PFF, when throwing the ball over twenty yards downfield in a clean pocket, Justin Herbert had the highest accurate pass rate in all of the 2020 draft class. His deep-ball abilities were well on display during throwing drills at the NFL combine.

However, there is a catch with Herbert's throwing abilities. Justin Herbert struggles to escape sudden pressure and his mechanics and decision-making suffering greatly in a muddy pocket. According to PFF, among 129 of qualifying college quarterbacks this past season, Herbert ranked 124th in negatively graded play rate under pressure. When targeting open receivers between five to eighteen yards from the line of scrimmage, Herbert flat out missed them 14.1% of the time in 2019. He also needs to improve his ball placement leading his receivers better and throw the ball with more touch especially on deep passes and fade routes.

There are also some questions with how his overall game will translate to the NFL. At Oregon, 23.2% of Herbert's pass attempts were screen passes. Considering no starting NFL quarterback has ever thrown screen passes at that rate, Herbert will need to learn to adjust and likely have some growing pains in the process.

Herbert has the physical tools to succeed standing at 6 '6'' and weighing 236 pounds. He has one of the strongest arms from the 2020 NFL Draft class, which lets him throw the ball into very tight windows even on the run. In addition, Herbert has shown that he is a fairly mobile quarterback, running a 4.68 40 yard-dash. This ranked 3rd in his draft class among quarterbacks who ran the 40, behind Cole McDonald (4.58) and Jalen Hurts (4.59). 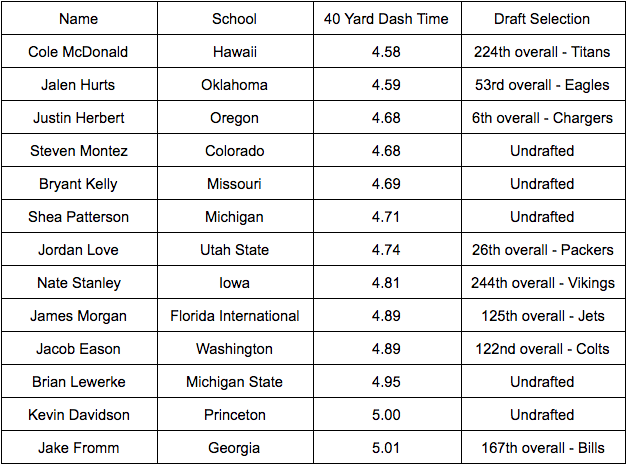 For comparison, Herbert's time is in the same ballpark as Deshaun Watson who ran a 4.66 (2017), Mitchell Trubisky who ran a 4.67 (2017), and Drew Lock who ran a 4.69 (2019). On paper, Herbert's speed should help him to move the chains for the Chargers in tough third-down situations when he's forced out of the pocket, and provide valuable rushing yards for his fantasy totals.

But despite Herbert's speed, he doesn't seem to utilize it as much as he should. In college, he only took off 5.37 times for 13.02 yards per game (Side note: College football records sacks as negative rushing yards). His college rush attempts ranked in the middle of the pack for projected starting AFC quarterbacks at 9th, while his rush yards ranked 7th. So fantasy owners should not expect him to come out of the gates with phenomenal rushing numbers like Josh Allen, Deshaun Watson, and Lamar Jackson did, but there's a ton of potential for growth in the rushing realm for Herbert.

Looking into each #AFC quarterback's college rushing statistics, it's clear that @Lj_era8 is an otherworldly dual-threat. He averaged more rushing yards per game in college than Deshaun Watson, Josh Allen, and Patrick Mahomes could COMBINED pic.twitter.com/ZoqFRt0Luc

With regards to his situation, Herbert has a very positive outlook with former Chargers quarterback Philip Rivers departing for the Indianapolis Colts this past offseason. Herbert will likely still start his career off on the bench with veteran quarterback Tyrod Taylor in front of him on the depth chart, but it's very likely that Herbert will take the starting role after a few games.

In addition, Herbert also enters a very talented offense. Last year with Philip Rivers at the helm with the Chargers offense finished No. 10 in the league in offensive production to the tune of 5,879 total yards (276.6 passing yards per game, 90.8 rushing yards per game) and averaging 21.1 points per game.

While the immediate outlook isn't great, with his physical ability, situation, and overall potential, he is worth drafting in 2QB formats and in keeper/dynasty formats as an intriguing long-term investment. Herbert has all the tools and could quiet his doubters much as Josh Allen has so far in Buffalo. Herbert will be groomed as the QB of the future and given every opportunity to succeed.

It's impossible to place Herbert ahead of Joe Burrow in dynasty for obvious reasons, but not out of the question to rank him ahead of Tua Tagovailoa. The Dolphins are in a total rebuild that may not pan out and Tagovailoa has legitimate injury issues that could resurface. The biggest question surrounding Herbert's fantasy value is whether he will fully live up to his potential.

In a single-QB league, Herbert will likely cost a pick late in the second round or early in the third of rookie drafts. For a QB-needy team, it may be worth the risk, but Herbert's value is far higher in Superflex leagues where he should be considered a first-rounder.