Auctions are an unpredictable draft format by nature, and these uncertain times make them all the more so. The present author participated in an auction this past weekend and was able to purchase two noteworthy players at significant discounts.

One of those players was a $1 flier on Niko Goodrum, a player who offers an intriguing skill set for fantasy and positional versatility that adds to his value in leagues with daily transactions. The other was a $26 winning bid on Astros superstar Jose Altuve, a cheaper price than $27 Marcell Ozuna or $31 Anthony Rizzo despite Altuve clearly being a better player than either.

Inspired by these draft results, I decided to look at ADP data to determine if these players are undervalued in other leagues. The answer is yes.

The 28-year-old Goodrum was the definition of an adequate fantasy player in 2019, slashing .248/.322/.421 with 12 HR and 12 SB (three CS) over 472 PAs. Goodrum has speed to burn (29 ft./sec Statcast Sprint Speed last season) and has swiped as many as 35 bags in a professional campaign, so it's pretty easy to see SB upside. His power indicators aren't as impressive, but he's not the total zero that Mallex Smith is either.

Perhaps drafters are ignoring Goodrum because he hit .248 despite a .338 BABIP last season, but he has the skills required to post an elevated mark again in 2020. He combines his foot speed with above-average exit velocity on ground balls (86.8 mph), suggesting that his .291 BABIP on worm killers last season was no fluke. While his 27.8 LD% is unlikely to repeat, his 22.8% mark from 2018 and MiLB history suggest that he could be better than league average in that area as well. Goodrum's FB% is also low enough (31.5% last season) to increase his BABIP projections.

Of course, that FB% also caps Goodrum's power output. His 13.3% HR/FB in 2019 wasn't special by any means, and both his 92.5 mph average airborne exit velocity and 6.3% rate of Brls/BBE were mediocre. That said, he pulls an above-average amount of fly balls (23.3%) and projects to hit second in Detroit's lineup, a position that could help him punch above his weight in terms of runs and RBI. Owners can probably expect a 15-HR pace to go along with above-average contributions in SB and counting stats.

Goodrum struck out 29.2% of the time in 2019, but he actually has a reasonable eye (32.4% chase rate) and only a slightly higher than average SwStr% (14.4%). His K% will probably be around 25-26% in 2020, creating a few more opportunities to cause havoc on the bases. He is the perfect bench bat to plug into your lineup in case of injury or light schedules in daily formats, providing a little bit of everything at a dirt-cheap price.

Altuve enjoyed one of the finer seasons in his storied career in 2019, slashing .298/.353/.550 with 31 HR and six steals (five CS). The decline in steals is concerning considering that fantasy owners are looking for them now more than ever, but it may have just been a fluke. Altuve has a career success rate of approximately 77%, and last season's 28.6 ft/sec Statcast Sprint Speed was a three-year high. He might also be inclined to steal as revenge for all of the HBP many envision the Astros getting in 2020.

Speed aside, Altuve's power spike appears partially legitimate. While his FB% increased only marginally (32.5 FB% vs. career 30.9%), he pulled a significantly higher percentage of his fly balls (28.6% vs. 21.1% career). His 8.1% rate of Brls/BBE was also Altuve's highest in the Statcast Era, while his 92.8 mph average airborne exit velocity was a smidgeon above league-average. Decent power plays up in Minute Maid Park, so Altuve can likely produce at a 25-HR pace even if 30 is unlikely.

Some analysts are noting Altuve's increased Pull% as the reason his batting average fell below .300, but that may not be the case. While Altuve pulled more grounders last season (65.7%) than he has over his career (57.5%), he still hit .298 in 144 PAs against the shift. It's more likely that his BABIP decline (.303 against a career mark of .337) was rooted in his LD% (17.6% last year, 21.5% career), a notoriously fickle stat that generally isn't predictive of anything. The 29-year-old is also too young for an age-related decline, so a rebound back over .300 should be expected.

Altuve also brings plus plate discipline to the table (7.5 BB%, 15 K%) even if he did swing a little bit harder last year (9 SwStr% vs. 6.3% career). He's also locked in as the No. 2 hitter in Houston's potent lineup, giving him plenty of opportunities to accumulate counting stats. In short, Altuve projects to hit .300+ with 25 HR, 20 SB, and a ton of R+RBI over a full season.

Quite frankly, you're not getting comparable production from the players taken around him. Here is where Altuve ranks according to FantasyPros ADP: 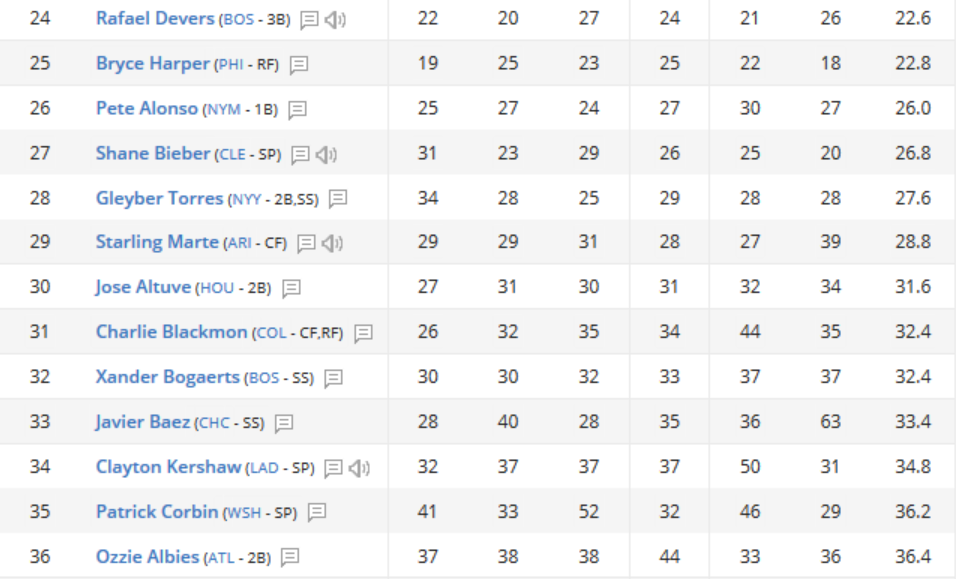 There are some good players there, but Rafael Devers' breakout wasn't supported by his peripherals, Charlie Blackmon shouldn't be started outside of Coors, Javier Baez has terrible plate discipline, and Clayton Kershaw has earned an injury-prone tag. There is zero evidence that the Astros cheating scandal significantly inflated Altuve's numbers or that it won't continue in a more effective form, so take Altuve and enjoy the first-round production in the third.

Verdict: Champ (based on the ability to get an absolute stud outside of the first round)