So far so good. It appears the NFL season will start on time as planned, so fantasy football draft season should proceed as usual. Of course, if you are a best-ball player, you've been drafting for months and will simply continue to build your portfolio of rosters.

The quarterback position requires a specific plan of attack in best-ball leagues, as you cannot play the streaming game based on matchups throughout the year and a backup is required to compensate for the bye weeks and account for injuries. Roster construction varies based on strategical preference, but it's usually advisable to stick with two QBs on a roster if your QB1 is a top-15 pick at the position or three if you play the waiting game. This makes analyzing tiers critical in order to assess who and when to select the right signal-caller.

We will continue to update rankings in every format throughout the offseason and you can find the latest rankings here. When you're finished here, check out our excellent coverage of the running back position by Phil Clark.

It's obvious that Lamar Jackson and Pat Mahomes will comprise the top tier on their own this preseason in all formats. What's notable is how their ADP seems to be slowly creeping up, as many owners decide that it's worth having a difference-maker at QB. Jackson is going 19th overall and Mahomes 23rd overall in FFPC Best-Ball leagues (non-Superflex). They rank slightly lower in BB10s at 21 and 27 respectively.

The RotoBaller rankings crew doesn't have either passer quite that high. In fact, we suggest passing on this tier in favor of acquiring high-end RB/WR in the second and third round instead. The likelihood of either passer reprising their career years is unlikely. While you can achieve a high floor on a weekly basis, you could come close to replicating that production with a pair of reliable passers later on. The lack of depth beyond the first couple of tiers at running back, along with their inflated ADP, make it more important to address that position in the first couple of rounds.

Josh Allen as QB7 seems about right but it may be surprising to see him a full 14 spots higher than his 95 ADP in BB10. It turns out there is a big discrepancy between sites, as he is going 82nd in FFPC and 83rd in NFBC drafts. There is a wider variation in value once you look at QB3-8, so if you are set on a guy, don't necessarily expect him to be available where he is typically taken. Allen could take a step forward with Stefon Diggs in town but placing him above Prescott is a bit much for me. Speaking of...

Dak Prescott is one of the biggest preseason ADP risers in 2020. The addition of CeeDee Lamb, a more aggressive head coach in Mike McCarthy, and the simple acknowledgment that he is indeed an elite quarterback have conspired to bring him into the second tier for most drafters. Another factor that works in Prescott's favor is the fact that the Cowboys have the third-easiest projected strength of schedule. Even without a new deal (what is Jerry Jones actually thinking?), Prescott is viewed as a solid top-five QB for redraft purposes.

Our rankings have him down a tier nearly 20 spots lower than his current draft position on FFPC, partly due to my own rankings. The issue is two-fold for me. 1) I don't value quarterbacks as highly as others in this format, so many of my rankings will be lower than ADP consensus. 2) The higher the draft slot, the less likely you are to find a good return on investment. Prescott is rock solid, but not likely to put up better numbers than last year, so you could find comparable value a round or two later. Consequently, I won't own too many shares outside of a Terminator league where I want a safe pick at the position.

Carson Wentz and Matt Ryan sit in the dead zone between high-upside QBs who offer rushing production and riskier picks due to age, inconsistency, or other concerns. In other words, if you like your QB safe and boring, here's your sweet spot.

Even with a skeleton crew at wide receiver much of the season, Wentz consistently put up QB1 fantasy numbers on a regular basis. 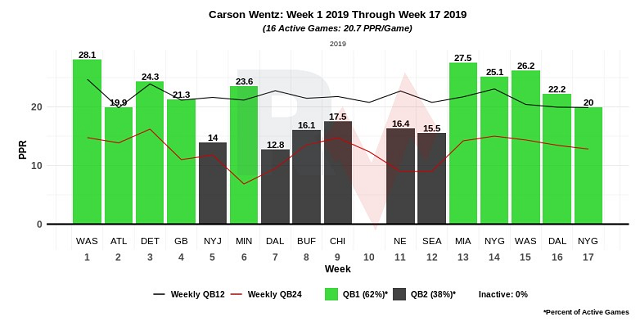 The addition of Jalen Reagor and possibility of a healthy Alshon Jeffery and DeSean Jackson can only help. The only issue with Wentz is that he doesn't have tangible upside for a breakout, league-winning type of season. There is no need to reach for him, so make sure to secure eight flex players (RB/WR/TE) before pulling the trigger.

A case hardly has to be made for Ryan. He led the NFL in pass completions (408) last year despite missing a game and has one of the best WR duos along with pass-catching back extraordinaire Todd Gurley II. Ryan has missed a total of three games over a 12-year career, so securing him just inside the top 100 players practically assures you can wait for a backup and safely keep your QB roster count to two with no risk.

We're far more optimistic about Aaron Rodgers than most. He has fallen outside the top 10 QBs in FFPC best-ball leagues and comes in at 10th on BB10. This is the inverse situation of Prescott, where perception of Rodgers' fantasy value may be unnecessarily low. Jordan Love won't see the field this season as long as Rodgers is healthy and concerns over the receiving corps are overblown. He actually should have an easier time finding his targets this year. If you recall, his main man Davante Adams was injured and missed four games and Allen Lazard was a rookie. Rodgers still managed to finish 2019 as the fantasy QB9. I'm pretty sure he'll be passing Jameis Winston on that list, so a top-eight finish is quite reasonable.

Rodgers had a very low 6.9% win rate on FFPC last year (lower than Joe Flacco, unbelievably) but that was based on a 73.9 ADP. Now that he's going around pick 114 as QB13, he makes for a good value for those who don't want to roll the dice on a second-year QB.

Full disclosure: Daniel Jones is tearing the inside of my soul apart. OK, that might be hyperbolic but he does create much internal conflict on draft day. On one hand, I have him pegged as a breakout candidate based on a wealth of targets at his disposal and a defense that could be worse than last year. On the other hand, he turns the ball over a helluva lot. He tossed 12 INT in 12 starts but also fumbled a league-high 18 times, recovering only three. Offensive line has been an issue (just ask Eli Manning), so he's not solely to blame, but it doesn't inspire confidence that he can reach his full potential just yet. I would keep him as a QB2 if paired with a high-floor veteran like Brees or Brady.

Tom Brady in Tampa under Bruce Arians, throwing to Mike Evans, Chris Godwin, and Gronk feels like it should be a safe bet. I have him down at QB17 in best-ball, however, which is the lowest of our rankers. I worry that the peaks might not make him the ideal draft target based on an ADP that keeps creeping upward. Brady is the anti-Daniel Jones in the sense that he rarely makes mistakes but also won't sling it down the field, at least not anymore.

According to NFL NextGenStats, Tom Brady ranked 26th with a 15.2 Aggressiveness rating while Daniel Jones ranked third at 22.4. Add in the fact that Tampa may have one of the most improved defenses, along with far fewer turnovers without Jameis Winston at the helm, and this team simply won't need to pass as much. Brady is a fine second QB but won't be a league-winner.

Once the starting-caliber quarterbacks are gone, there's a big cluster of passers lumped together ranging from rookie Joe Burrow to veteran Philip Rivers. Roster construction should dictate which direction you go for your second QB, depending on who was selected prior. If you already rostered a QB from the first two tiers, it makes sense to wait and take a chance on someone like Burrow or Newton, who could put up the occasional big week but most likely won't be needed in your starting lineup. If your QB1 is Baker Mayfield or Daniel Jones, then it should be a priority to select someone like Matthew Stafford or Jared Goff for a safe floor.

Big Ben might be the riskiest "safe" pick of this whole pack. There are arguments on both sides. Critics will point out that he's 38 years old, coming off elbow surgery, and doesn't bring a high floor due to a lack of rushing ability (and a propensity for turnovers at times). Supporters will astutely note that he is one year removed from a 5,000-yard passing season, has a deep, young receiver group, and hasn't finished worse than QB20 in the past 10 years, 2019 not included.

I'm about 40-50 spots higher on Goff than my fellow rankers. He was fifth in xComp% at 66.5% and has been a consistent performer with 4,600 passing yards the past two seasons. Brandin Cooks and Todd Gurley are gone, but neither were 100% healthy last year and Gurley's presence may have hampered the offense with his 3.8 yards per carry. Having an explosive back like Cam Akers and now three pass-catching tight end threats should keep Goff's yardage total high as usual.

I currently own more Derek Carr shares in best-ball leagues than I ever imagined. The prevailing thought is that Marcus Mariota may displace him in 2020, but as someone who has watched Mariota actually play, I don't share that concern.

Mariota's xComp% was 61.8%, fifth-worst among qualified passers (128 pass attempts). He was dispatched by the Titans, who picked him second overall mind you, and will simply serve as the backup unless Carr really struggles early on. He's not the most exciting, but Carr has always been efficient and at least has some new weapons at receiver.

I had some hopes early this preseason that Dwayne Haskins could be a sneaky backup QB target this year but those are gone now. His 76 QB Rating was worse than all but Duck Hodges and David Blough and the new coaching staff will have no attachment to him. Typically, second-year quarterbacks are able to make progress but the backfield situation is now a mess and the receiving corps is filled with inexperience. Hell, he might fall to third on the depth chart by season's end.

I actually had some faith in Dwayne Haskins this year because of his arm talent and chance for offseason development but the fact Alex Smith is now healthy and they traded for Kyle Allen makes me think his leash is way too short.

Best-ball drafters are catching on to this sentiment, as his ADP continues to fall. If you are going with a three-QB setup, you can do better than Haskins.

If I had to pick out a late QB target that could be a league-winner, it would be Drew Lock or Gardner Minshew. They are both going within five spots of each other in FFPC, around the 150 range. Minshew's ADP has slowly climbed but it's obvious that his ceiling is limited based on the situation in Jacksonville. Lock has better targets and a better O-line protecting him. Minshew will likely rack up garbage time yardage on several occasions but I expect Lock to rack up more touchdown passes.