We are nearly the end of the fantasy baseball season, and if you're still plugging away, I congratulate you on making it this far! Many games are played today, so plenty of viable streamers sit on your waiver wire to scoop up. Let's focus on how you can use the following streamers to steal a category and run away with your league's title.

When choosing my daily hitter streamers, I examine their platoon splits, lineup position, and pitching matchup. With pitchers, I account for the opposing lineup, team ballpark, and recent performance to help make my decision.

Each of my streamers will be rostered in between 0-40% of Yahoo leagues, with a mixed focus on both shallow and deeper formats. Today, I will be providing a streamer for each position, including two starting pitchers. Let’s take a look at the Tuesday slate and dig out some streamer gems to help you start the week with a bang!

Dalbec is a terrific source of power and is a perfect streaming option. He has a .375 ISO with seven home runs through his 18 career games. The Boston Red Sox has firmly planted him in the middle of the lineup, and Bobby continues to produce. He is slashing .281/.352/.656 with a 1.008 OPS in 64 at-bats. Dalbec could help you in four categories today; pick him up quick!

Wendle is laying waste to pitching recently-slashing .350/.386/.500 with a .886 OPS in his last two weeks. The production has come in many ways: two SBs, one HR, and eight runs+RBI. Let's ride the hot hand that is multi-eligible all over the infield. He gets a favorable matchup against Michael Wacha and his 6.75 ERA with 1.68 WHIP.

Need to play catch up in the home run category? Look for further than Nate Lowe-he has four home runs in 54 at-bats this season. He is a right-handed pitching masher that will see Michael Wacha on the mound. Lowe sports a .297/.409/.676 slash line with 1.085 OPS vs. RHP. Sometimes streamers just come together nicely, and this one looks too perfect to pass up.

Suggest a player with a higher SLG% than OBP? Am I crazy? No, not entirely. This week is the finals, and Berti is a speculative add for stolen bases, and Berti can swipe a few bags-he has eight on the year. He has reached base eight times in his previous three games since returning from a brief IL stint. All we need is the green light to take second base, and you've got a valuable speed streamer.

Dickerson is on one of his heaters again, and when he does, you need to jump on board. He is 8-for-15 with a pair of home runs and slugging 1.699 in his previous week of games. On top of the recent streak, he also draws a favorable matchup against RHP Ryan Castellani's 5.59 ERA and 1.39 WHIP. Dickerson will look to add to the nine home runs already put over the fences against RHP in Oracle Park this afternoon.

Grabbing a piece of the potent Yankees offense is a baller move; they have been a dynamic squad near the tops in the MLB in runs scored each week. Picking up the three-hole hitter in that lineup at this point in the season? Yes, please. Hick is also incredibly useful to any OBP leagues because he is walking(20.0%) more than he strikeouts(17.9%). Hicks may not be a tremendous power source, but he can help you out in a few other categories.

Another three-hole hitter in a productive offense is available? Belt may have cooled off a little since his red hot August, but the production is still there. He is slashing .271/.426/.542 with a .968 OPS in September and walking more than striking out. If for nothing else, he carries a .624 SLG% and 1.054 OPS vs. RHP. Tonight's matchup is against Castellani, who's statcast slider puts him in the bottom 10% for xwOBA, hard-hit%, and exit velocity. 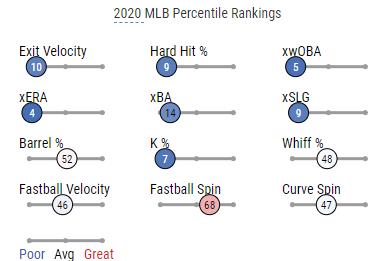 Eflin is a tremendous streamer for your fantasy squad. He is a terrific source of strikeouts(29.6 K%) that limits the number of walks(6.3% BB%). When hitters make contact, they put the ball on the ground at a very high 47.3% clip. A higher ground ball rate is helpful because ground balls often cause lower batting averages on balls hit into play. When you look at Eflin's 4.28 ERA, it's backed up by a 3.34 FIP and 3.05 xFIP. The underlying metrics suggest Eflin is a bit unlucky and is better than his ERA indicates. Lastly, Eflin has a fair shot at picking up a win today as he squares off against the 23-32 Washington Nationals that sputtering to the finish line.