Shohei Ohtani is over a year removed from Tommy John surgery and on a short year, he may have pushed a bit hard to be ready to rock and roll. This has caused another injury and now he has been relegated to an everyday role as a hitter. This will be a deep dive into the struggles of his hitting. The pitching sample was too small and there were obvious issues returning from injury so it can be chalked up to that.

Regardless, we all expected Ohtani to be a solid, five-category fantasy baseball producer as a full-time hitter. That has not been the case. In fact, he has struggled mightily. He does have five home runs and two stolen bases but he is dragging your batting average through the mud. The triple slash as a whole is a lowly .175/.250/.391.

This is not what we expected when Ohtani returned to a full-time hitting role. It is worth exploring what is going on. Let's dive in.

The walk rate (9.4%) and strikeout rate (26%) are pretty much in line with expectations. The walk rate is up from 2019 but, again, nothing really stands out about it. The ISO is the same as last year. The ISO is deceiving because although it is the same, the batting average and slugging percentage are way down but it's a reminder the power is still playing up all things considered.

We have also seen a steep decline in line drive rate. With the line drive down 11.4%, this is a big factor behind the BABIP and batting average being down. The increase in fly balls is worth noting as well. It has jumped up 9.4% from 2019 to 33.9% in 2020. This would not be an issue if it weren't for it all coming from the line drive rate rather than the ground-ball rate.

More notable changes are the pull and center rates. He has been more of an all-fields hitter in the past but this year he has been pull-heavy and has career-high marks in pull% (43.5%) and cent% (also 43.5%) with a career-low oppo% of 12.9%. In contrast, he had at least 30% to all fields last season. This could suggest he is pressing as he tries to figure things out.

We mentioned the strikeouts have not increased much and it is surprising given what is going on because the contact rates are down across the board and the swing strike rate (or SwStr%) is up to a career-worst 16%. This is 3.1% higher than any previous SwStr%. The whiff rate is also worrisome and has increased to a career-worst 33.2%.

This is a huge reason for the struggles. Ohtani just is not making contact. This is with roughly the same swing rate as 2019 that currently sits at 49.7%. So he is swinging the same amount as last season but less in the zone while sustaining the same amount of swings outside of the zone. This is not ideal.

Ohtani is seeing the most pitches in the zone than ever before to this point with a zone rate of 45%. 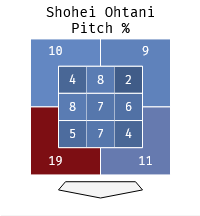 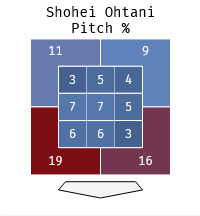 Ultimately, pitchers are attacking the zone more and Ohtani is swinging in the zone less. That can partly be attributed to the drop of his first pitch swing rate to 31.5% this year compared to the 37.4% last season. There is just a lot of things not going Ohtani's way right now.

Seeing how the pitchers are attacking the zone on Ohtani, it is worth noting he is 0-1 more than any count this season (46 AB and 48 PA), which further suggests he falls behind early and often. What is more concerning is that teams have started shifting more on Ohtani and it is working.

Pitchers have also attacked Shohei a bit differently as well in 2020. In 2019, he crushed fastballs and breaking pitches but did somewhat struggle against off-speed offerings. Pitchers took notice and you can see the change in the attack in the pitches he is seeing.

Although he is expected to hit better against fastballs (xBA 0f .307) and breaking pitches (xBA .210 which is still not fantastic), the pitch mix change and attacking the zone more has given Ohtani trouble and he has yet to adjust it seems. 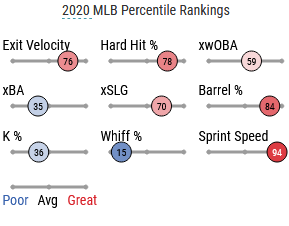 Between hitting more fly balls and pulling the ball more, he could be pressing and selling out for power. With his change of launch angle, the sd(LA) also became wider. Essentially the swing isn't as tight and isn't being repeated as often. The sd(LA) increased from 23 degrees in 2019 to 30.7 degrees so far in 2020.

Long term, there is zero concern with Shohei Othani. In the short term, with so many things not in his favor and pitchers adapting to him, the confidence in the bounce back is lacking. You might be able to take advantage and buy him in keeper and dynasty leagues at a reduced price.

This season is unlike any other and in a typical season, the bounce-back would not be second-guessed. We are running low on time and unless you are desperate for steals, he is someone to bench for the time being. I would not feel confident in buying low unless you had spare parts and the room on the bench to stash him. I am not ready to say drop him yet. Regardless, the best of Ohtani is yet to come but 2020 could be a lost season.