This is the time for dynasty leagues to plan rookie drafts and make preparations for another competitive season. But what if you're new to the dynasty world or deciding whether to dip your toe in the pool? First, you should read about Joe Nicely's experience jumping head first into a dynasty league with the sharks at RotoBaller (myself included).

The next step is to determine how to build your team. Your draft strategy will be different relative to a re-draft league, as youth will be more prominent and veterans can be discounted. You will also see various strategies employed, as some owners are strictly in win-now mode while others make a conscious plan to create a squad that can compete a year or two down the road.

The aforementioned dynasty startup league of RotoBaller NFL analysts took place on FFPC, my site of choice for best ball. They are best known as a high-stakes league for competitions like the Main Event, Best-Ball leagues and patented Terminator tourneys, but they are also one of the best places to host a Dynasty league. In an effort to help our readers ready to dive into dynasty for the first time or those who simply want to get a feel for where value lies on the trade market, I will review our recent draft to find the biggest ADP surprises, risers, fallers, and values.

Let's start with a look at the first 10 rounds to identify trends and decide which players may be taken too early in dynasty leagues.

Here is a link to the full draft board for easier viewing.

Christian McCaffrey not number one? Is Saquon Barkley a better choice because he is a few months younger and has about 300 fewer touches under his belt? That's a discussion for another article, but things started off with a slight twist after just one pick. Then again, this could be a growing trend as FantasyFootballCalculator has Barkley as the consensus top pick in their mock draft data.

Does Josh Jacobs belong as the RB6 in dynasty, ahead of Derrick Henry, Miles Sanders, Joe Mixon, Nick Chubb and others? He's typically available a few picks later but as a second-year player in an offense that could continue to improve with the infusion of youth at receiver, don't be surprised if he sticks in the first round more often than not. His role in the passing game might not grow as expected now that Lynn Bowden Jr. is there to serve as a hybrid back. The team is still paying Jalen Richard $7 million to stick around, so he'll be involved as a receiver as well.

Aaron Jones scored a league-leading 19 touchdowns along with 1,558 yards from scrimmage last year. At 25 years old, he's younger than Kenyan Drake and the same age as Leonard Fournette and Austin Ekeler. Yet, he was the 19th running back selected in this draft and fell to the fourth round in our prior dynasty mock draft. Some are worried about the presence of A.J. Dillon but that seems presumptuous. Dillon may replace Jamaal Williams as the RB2 in Green Bay but Jones' role should be far safer than Fournette in Jacksonville.

The top rookie running backs are always a valued commodity. Once you reach the next tier of players in questionable situations, it's a roll of the dice to spend an early pick in a startup league. Ke'Shawn Vaughn is the best example of a risk/reward pick. He was taken toward the end of the fifth round in our league, before established backs like Sony Michel and Le'Veon Bell. If he grabs hold of the starting job in Tampa Bay and develops into a three-down back, this will be a great pick. If he can't beat out Ronald Jones II for touches, this will be a wasted pick very early in the draft.

In a crazy deep rookie receiver class, there were plenty of choices on the board. Everyone's got their favorite prospect and draft target, so there's going to be plenty of subjectivity in play. That said, I raised an eyebrow when Jerry Jeudy was taken after both Justin Jefferson and Michael Pittman Jr. in round six. I had hoped either Jeudy or Pittman would make it back to me in the seventh after I grabbed my QB, but that wasn't meant to be.

I'm as close as anyone is to being a Pittman STAN but I truly find it hard to believe that Jeudy was the fifth rookie WR taken. In pre-draft rookie rankings, PFF had him as the WR1 and second overall rookie behind only RB Jonathan Taylor. I understand that landing spot matters, but it's not as if Denver is a barren wasteland on offense (any more). His draft position here wasn't particularly low but it is interesting to see where he fell among his fellow rookies.

How high should you feel comfortable selecting Rob Gronkowski in dynasty considering he retired once, has chronic back pain, and will be competing for targets with Mike Evans, Chris Godwin, and O.J. Howard? Round 10 feels early, especially before rising players like Dallas Goedert and Irv Smith Jr., but for a team in win-now mode, it might be a gamble worth taking as long as there is a young backup TE waiting in the wings soon after. His ADP has been climbing steadily since his return, so don't wait too long to pull the trigger if he's on your radar.

Veteran Values After Round 10

Recency bias tells us that Marvin Jones Jr. isn't worth much, seeing as how he dropped off in the second half of 2019. There just might be a correlation with the injury that kept Matthew Stafford out for the last eight games of the year plus the fact that Jones himself missed the last three games. Before then, he was a top-25 receiver in terms of target share and a solid fantasy WR2, more so than some other names that are far higher valued. 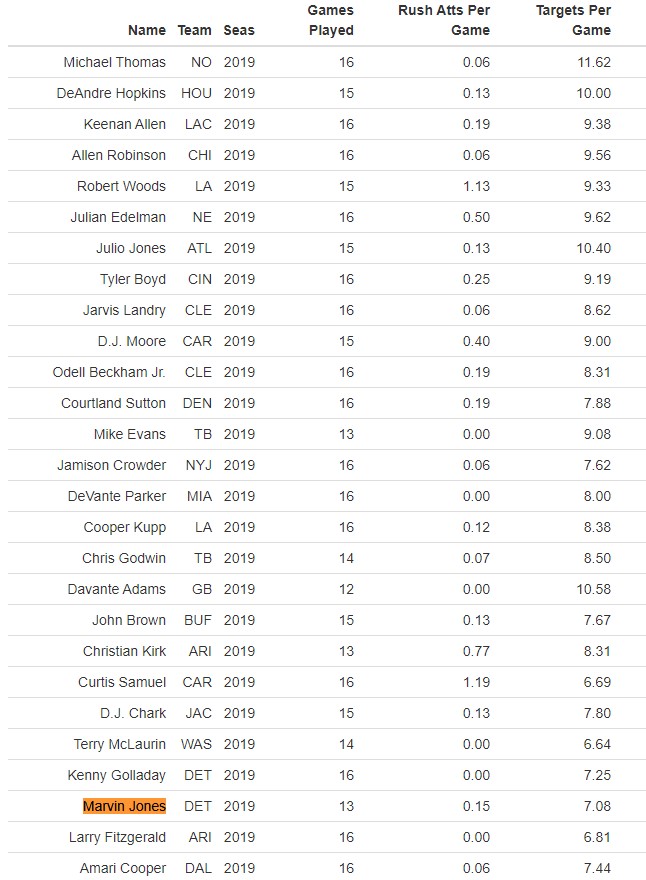 Jones is now 30, so he's realistically ready to enter the latter stage of his NFL career. Still, he should be a solid contributor for another couple of years and comes at a great discount around pick 140. The same could be said for Stafford himself, who was taken two rounds later, but you likely don't want to make him your starting QB.

It's hard to imagine Emmanuel Sanders not returning top-25 WR numbers in New Orleans. He hasn't put up great numbers the last couple of years, but he also didn't have Drew Brees as his quarterback. At age 33 and with Brees on the verge of retirement, this is a short-term rental, though.

The case of Alshon Jeffery is more interesting, as he just turned 30 and still appears to be in Philadelphia's plans for 2020. If he recovers fully from his Lisfranc injury, he could be a steal in the 15th round.

I get that Aaron Rodgers seems to be on the outs with Matt LaFleur and the Pack, but it's unlikely he retires after this year. In a "down" season, he threw for 4,002 yards with a 26-4 TD-INT rate. The lack of rushing upside hurts but if you want to play the late-round QB game with your dynasty squad while collecting young RB/WR types early on, Rodgers is the ideal candidate.

Devonta Freeman is still without a team as the Falcons let him go after six seasons. His market is reportedly growing, however, with teams like the Seahawks, Jets, and Eagles inquiring about his services. He'll be a backup or committee back wherever he lands, but is an injury away from becoming relevant in a hurry again.

A 20-man roster isn't crazy deep, so there weren't any undrafted free agents coming off the board. Raymond Calais was the lone exception. Our Phil Clark either sees something special in Calais and his 4.42 40 time or he is hedging his bet from the earlier Vaughn pick.

I fully approve of the Bisi Johnson selection in round 19, seeing as how I declared him one of my dynasty deep sleepers to target. If Justin Jefferson has a hard time adjusting to the pros, Johnson will be second in line for targets.

Devin Asiasi is owned in just 54% of FFPC Dynasty leagues but makes sense as a third tight end in this format. FFPC leagues have a TE premium of 1.5 PPR, which boosts the value of this position. With a stud like Kelce as my TE1, it was only logical to take a chance on an athletic, pass-catching prospect in the final rounds. The Patriots are thin at receiver and a young QB like Jarrett Stidham could lean on his tight end quite a bit. The only concern is the presence of fellow third-round pick Dalton Keene. The later-drafted player could beat out Asiasi as the starter much like Mark Andrews did to Hayden Hurst in Baltimore.

Here's an interesting strategy. Mike "Big Rigg" Riggall made Jalen Hurts his final pick to backup his QB, Carson Wentz. He essentially owns the Eagles quarterback position for the next several years, for better or worse. The only other real-life backup quarterback taken in our draft was Jameis Winston, who should take the mantle in New Orleans next year. Even Jordan Love was bypassed in our draft. I don't expect Hurts to be taken before Love in many dynasty leagues but it goes to show that rookies are valued differently by all.