Pitchers and catchers have officially reported and position player workouts are getting underway, which means baseball season is officially upon us! Maybe you haven’t started prepping for your drafts, but fortunately for you, there have already been plenty of drafts, which means that fantasy players out there have already started dealing with tough draft position decisions.

First base is extremely top-heavy in 2020, so finding the best option is of the utmost importance. You do not want to swing and miss if you can help it.

In this article, we will take a look at two top-end first basemen who are going very close together in early drafts: The Oakland Athletics' Matt Olson (early ADP 65, sixth 1B) and the St. Louis Cardinals' Paul Goldschmidt (early ADP 66, seventh 1B). These two are being drafted almost interchangeably as noted by their ADP, but does one offer more upside and value than the other? We will take a look at each player's history to determine which of the two you should take around ADP 65.

Oakland Athletics' first baseman Matt Olson has been quickly ascending to top-flight status over the previous two seasons. In 2019, Olson showed why he belonged in the conversation with the best-hitting first basemen in the league by slashing .267/.351/.545 with 36 HR, 91 RBI, 73 R, and 51 BB. He did all of this in only 481 at-bats thanks to a broken hamate bone that cost him six weeks of the season.

Olson shined when it came to hitting for power as his power metrics show that he is not rivaled by many. In 2019, Olson finished with a barrel-rate of 14.5%, a hard-hit rate of 50.3%, and an exit velocity of 91.9 mph. Each of these ranked in the top five percent in all of baseball. He also put up a solid .576 xSLG and .386 xWOBA, which ranked him 12th and 19th in the league, respectively. Each of these stats, except for exit velocity, ranked above his career norms as well.

Aside from simply being able to mash, Olson has also shown the ability to hit the ball to all parts of the park over the past two seasons as expressed by his spray chart. 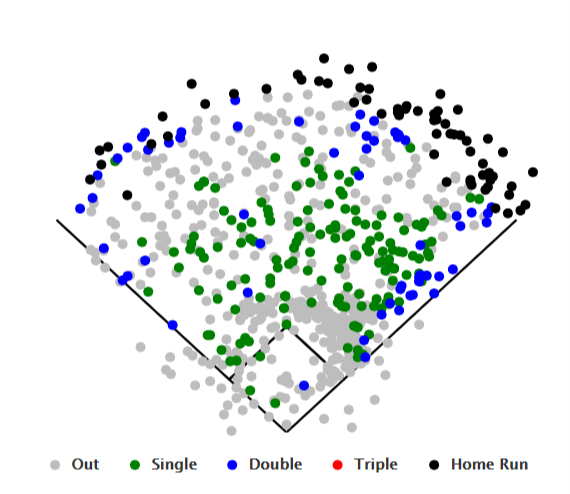 Olson is projected to hit cleanup in an Athletics' lineup that scored the eighth-most runs in baseball in 2019 and had the 11th-best on-base percentage in baseball. This is a lineup where he will once again have plenty of opportunities to drive in runs as well as score runs. It is clear why his current ADP sits at 65 overall and is being taken as the sixth first baseman off the board.

Paul Goldschmidt had been one of the absolute models for consistency from 2013-2018. In 2019, he dropped off slightly by slashing .260/.346/.476 with 34 HR, 97 RBI, 97 R, and 78 BB in 597 at-bats. The counting stats are still solid, however, he put up a career-worst batting average, on-base percentage, and slugging percentage. The average and on-base percentage are especially troubling because Goldschmidt has always been a guy you could count on for high average and high walk totals. In 2019, his walk rate sank to 11.4%, which was also the lowest of his career. If Goldschmidt is going to have some decline in his walk rate and ability to get on base, then his power metrics would have needed to show improvement to trust him as we have in the past.

In 2019, Goldschmidt put up an 11.3% barrel-rate, 90.1 mph exit velocity, .262 xBA, .513 xSLG, and 42.4% hard-hit rate. While none of these metrics are bad by any means, they are ALL below his career norms while his exit velocity, xBA, and hard-hit rate were career worsts. Therefore, upon further review, Goldschmidt got on base at a lower clip and hit for less power than he has in previous seasons. This is not a good combination and could be a trend for him moving forward as he turns 33 this season.

It is also possible that Goldschmidt was just going through some adjustments in 2019. After all, it was a new team, new manager, and new ballpark to get used to. Busch Stadium does score lower than Chase Field in terms of runs when looking at advanced park metrics, which could also play a role in Goldschmidt's decline from prior seasons.

After reviewing each of Olson's and Goldschmidt's prior performances and 2019 advanced metrics, it seems like Olson is the best option in drafts for 2020. Olson was stronger in power metrics such as barrel-rate, exit velocity, xSLG, and hard-hit rate. These metrics directly translated to Olson hitting more home runs than Goldschmidt (in a less hitter-friendly park) and driving in only six fewer runs.

Olson did all of this in 114 fewer at-bats as well. Olson also hits in a better lineup as the Athletics ranked eighth in total runs scored and 11th in on-base percentage while the Cardinals ranked 19th and 14th, respectively. Overall, Olson looks like the choice at first base around ADP 65.