In fantasy baseball, there are two scoring categories that are somewhat exclusive to a certain type of player: stolen bases and saves. Saves are obvious; only closers can earn them. As such, fantasy owners must decide how important that category is to the overall construction of their roster. If we value the stat, we'll draft closers relatively early. If we're content to take a hit in saves in favor of loading up on multi-category hitters and starting pitchers, we'll grab some closers late and display aggressiveness on the waiver wire throughout the year. A much shorter description of the latter strategy is "punting saves."

In some ways, this same philosophy can be applied to stolen bases. Sure, there are far more position players who can steal bases than there are pitchers who can earn saves. Moreover, at least a few of the better base-path thieves in the league are valuable in multiple categories (Christian Yelich, Ronald Acuna, for example). But there are also a handful of high-steal guys who are offensive liabilities outside of swiping bags (Adalberto Mondesi, Mallex Smith). Selecting players who are likely to hurt us in several offensive scoring categories just because they can greatly help us in steals requires us to pass up on more well-rounded hitters at certain junctures of the draft. On the flip side, this isn't 1986. There are only so many truly elite base-stealers in the league, which begs the question: Is punting steals a good idea?

In the following passages, we'll discuss the merits and drawbacks of punting steals. There are a variety of factors to take into account, and there is no across-the-board right or wrong answer. Our decisions on whether or not to go this route will come down to a series of questions. *Note: All ADP information used in this article is courtesy of NFBC.

How Much Do I Value Steals?

Let's start with why locking up stolen bases is a perfectly reasonable draft strategy if that's how you operate. I mentioned 1986 as a year when players were seemingly swiping bags at will, but the truth is we can greatly narrow the timeline if we want evidence that true-blue base-stealers are a dying breed. 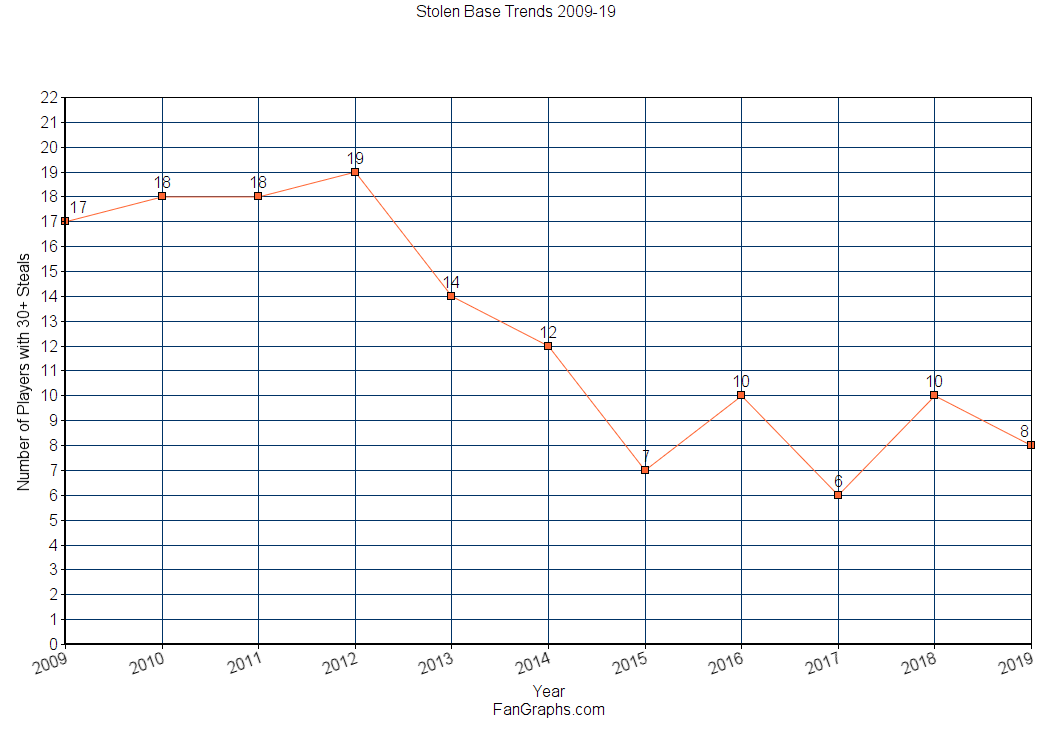 With that in mind, we simply need to ask ourselves how important the category actually is to us. Much like with saves and closers, knowing how we value the category will help us determine a plan of action. From there, we can ask more specific questions about individual players.

What Else Can I Expect From This Player?

Our next question focuses exclusively on players for whom steals are the primary draw. The above-mentioned Smith and Mondesi ranked first and second, respectively, in stolen bases last season. Mondesi's on-base percentage was .291, and Smith's was an even .300. Neither offers any power to offset their relative inability to consistently reach base, or to supplement their stolen base tallies.

Smith plays for one of the worst teams in the league in Seattle, so counting on his high steal total to automatically translate into a ton of runs isn't necessarily a safe bet. Mondesi does have some power hitting behind him in the Royals lineup in Jorge Soler, but it's tough to truly capitalize on that with a sub-.300 OBP. In drafting either one of these players, we're essentially banking on them to steal such an exorbitant number of bases that their shortcomings elsewhere don't tank our lineups.

Mondesi in particular should have red flags book-ending his name on the draft board, as his current ADP is 34.91. Even if he steals 60 bases, that's a high price to pay for a guy who has yet to prove he can give us anything else. At least we can wait awhile on Smith, who isn't being drafted until the 12th round in 12-team leagues. I'm punting on steals 100 times out of 100 if the example in question is Mondesi.

Third on the stolen-base leaderboard in 2019 was Jonathan Villar, who can provide us with value in more than one category. Villar clubbed 24 home runs and scored 111 runs last season for the lowly Orioles. Because he put up those numbers in Baltimore, I'm not overly concerned that a new home with the equally hapless Marlins will put a significant dent in his overall offensive production. (It is worth noting, however, that it's much more difficult to hit baseballs out of Marlins Park than out of Camden Yards.)

Still, Villar posted a .279/.339/.453 slash line last season, which is a far cry from what Smith or Mondesi can say. He's going slightly later than Mondesi at ADP 37.09. If I absolutely must choose between one of them at this point in the draft, I'll take slightly fewer steals in exchange for a more well-rounded offensive player in Villar. But even then I'm passing up on great value elsewhere, which brings us to our next question.

What Sacrifices Am I Making by Drafting This Player?

Part of the dilemma here is that, again, the list of exceptional base-stealers in 2020 is much shorter than it was in past generations of the sport. When only a half-dozen or so guys eclipse the 30-steal threshold, there's certainly an argument to be made for giving ourselves an overwhelming advantage by grabbing one of them. But especially early in the draft, we're inevitably going to have to sacrifice in other spots if we do so.

Coming back to our Villar/Mondesi example, some of the other players who could theoretically be available to us at that ADP are Peter Alonso, Ozzie Albies, Jose Altuve, Austin Meadows, and Javier Baez. All of these guys are multi-dimensional fantasy players with tons of upside and high floors, though none are likely to challenge for the stolen base crown.

Unless we're drafting at the very beginning or end of a round, we can likely only have one of the players in this range. Would we prefer for that one player to help us in some combination of runs, RBI, batting average, and homers? Or are we comfortable with the high steal total and drop-off in other categories? The earlier in the draft, the greater the sacrifice.

If we take a Villar or a Mondesi in the fourth round, then we need to acknowledge what we're giving up elsewhere on our roster and approach the rest of our draft accordingly. This is easier said than done, as there is only so much we can control about the draft in the first place.

What Other Players Can Help Me in Stolen Bases?

Most of this discussion has been centralized on guys who excel in steals and not much else. But even if we don't land any of them, we're not entirely out of the running (pun strongly intended) in the category. We can still incorporate steals into our draft strategy without honing in on relatively one-dimensional players. So let us now turn our attention to the players who can steal bases, but for whom steals don't tell the whole story.

First off, if we have a late first-round pick and we select Trea Turner, great. He hits for average, has some decent power, and his place at the top of the Nationals lineup easily puts 100 runs scored within his range of outcomes. If we have a top-five pick and we can snag Yelich or Acuna, even better. Steals are, like, the fourth thing you think of when you think of Yelich or Acuna.

Beyond the very top of the stolen-base leaderboard, however, there are multitudes of players who can contribute steals to our line while also helping us out in other categories. This is where the roads of punting saves and punting steals go their separate ways: We eventually have to roster a couple of closers to have any chance in saves, but we don't necessarily need a Mondesi or a Smith to lead our league in steals.

I consulted FanGraphs in an attempt to find some evidence for my case, and as always, they did not disappoint. Since the start of 2017, there have been 76 instances in which a player met or exceeded the following thresholds in a single season: 12 stolen bases, 15 home runs, 75 runs scored. That's a three-year average of just over 25 guys providing us some pretty well-rounded fantasy production, with steals being the most difficult to come by.

There are repeat offenders on this list (which admittedly skews the total somewhat), as well as a couple of early-round superstars we can't exactly wait on at the draft, but there are plenty of diamonds in the rough as well. Among some of the less-heralded names to have achieved this feat in 2019 are Amed Rosario (ADP 129.87), Adam Eaton (ADP 209.05), Danny Santana (ADP 136.64), Shin-Soo Choo (ADP 250.40), Ramon Laureano (ADP 78.27), Tim Anderson (ADP 102.51), and Kevin Pillar (largely going undrafted in standard-sized leagues). Andrew Benintendi also accomplished this twice in 2017-18 before a relatively down 2019; he's a fine bet to reappear on the list in 2020.

We can even narrow the sample to isolate players who aren't going to drag down our batting average too much. In that case, there have still been 52 instances in which a player posted the above thresholds while also hitting at least .265. The point is, we can find players with the ability to contribute stolen bases without tanking our lineup in other categories, and we don't have to sell out for them in the early rounds.

If we are lucky enough to grab Turner, Yelich, Acuna, or even Francisco Lindor in the first round, then adding just a few of these guys later on puts us in pretty good position to contend for the league lead in steals. If we miss on those players, fear not. There will still be plenty of opportunities for us to pad our stolen base total as the draft progresses, even if we don't land an elite thief. And with a well-rounded offense, a middling finish in steals won't crush our championship aspirations.

This strategy can essentially be defined as punting steals without actually punting steals. We're acknowledging that we probably won't end up with one of the top stolen-base threats on the draft board, but we're not ignoring the category altogether.

When it's all said and done, we all have to make our own decisions on how to draft. This is just my personal process. I find that asking myself these questions about what I want my roster to look like helps me prepare. It might not work for everyone, but if you can take at least a few pointers away from this then I'm happy to have (hopefully) helped you get ready for your own draft. If you have any questions about anything pertaining to fantasy baseball, feel free to direct them to me on Twitter: @cjoreillyCLE. Thank you for reading, good luck, and most importantly--have fun!