Every season, fantasy owners across head-to-head leagues are faced with a tough decision on draft day. Do they load up on crummy starting pitchers at the end of the draft to amass wins and strikeouts? Or do they opt to only roster good starters and spend late-round draft picks on relievers to help with ERA and WHIP?

It turns out that doesn’t have to be one or the other. They may be hard to find, but there are a select few late-round SPs that could aid in counting stats without being a drain on ratios.

Here are some undervalued starting pitchers who can help your fantasy rotation maintain WHIP.

However, it looks like tales of his decline had been greatly exaggerated. In 2019, the “Shark” got healthy and bounced back in every conceivable way. He can’t generate the swing-and-miss stuff he used to (6.95 K/9,) but his BB rate lowered back down to a healthy 6.6% leading to a 3.52 ERA (21st by SP), and 1.11 WHIP (16th by SP.) Don’t expect that high a level of production in 2020. His .240 BABIP will regress, but the numbers show that right-hander had changed his approach at the mound, meaning his improved outings are sustainable, not just blind luck.

The Giant’s four-seamer dipped to a career-low 91.6MPH. And yet, it had a 20% whiff rate, (his highest on that pitch since 2012,) and a .174 AVG against. The career-high 2571 spin rate on that pitch (97th percentile in pitchers) was a large reason why his fastball was able to be so effective, even with diminishing speed. He also featured his cutter a lot more in 2019, making it his secondary pitch.

He was right to do so, it became his most dominant pitch, striking out more batters than any other. Opponents hit .198  and slugged a measly .333 against the cutter. It looks like Samardzija had essentially abandoned his curveball, throwing it 74 times all of last season. But, he still has five pitches in his arsenal to keep hitters honest and make the veteran unpredictable.

Samardzija has always been a little streaky. He got lit up, in May and June, averaging a 1.43 WHIP and a 5.74 ERA. Then, the Notre Dame alum settled down and figured out how to pitch effectively with the dip in his velocity. In 82.2 IP after the All-Star break, he had 2.94 ERA and 0.99 WHIP. Further evidence that he is adjusting to life as an aging former ace.

Before the 2020 season starts, Samardzija is listed as the second pitcher in the Giants rotation behind fellow veteran and 2014 All-Star Johnny Cueto; his job is secure. He is currently going undrafted in most standard leagues; he has a 338 ADP according to NFBC. Samardzija will be more valuable in quality start leagues, he had a respectable 13 last season. Meanwhile, Baseball Prospectus PECOTA projections give the Giants a 0.2% chance of making the playoffs, so needless to say there won’t be many wins in the cards for San Francisco’s rotation in 2020.

What the “Shark” appears to be losing in K’s he is making up for in WHIP. Don’t expect another 1.11 in that category, but even if it regresses to 1.20 or even 1.25, it’s much better than most pitchers taken in the last round of drafts.

The Miami Marlins have been one of the worst teams in baseball for a while now. They haven’t had a winning season since 2009 (87-75,) and their last postseason appearance was in 2003 when they won the Pennant. However, their starting pitching in 2019 was interesting, to say the least. Entering 2020, even with Zac Gallen now on the Arizona Diamondbacks, the Marlins boast an exciting young rotation. Of the five SP expected to make the opening day roster, last seasons leader in ERA and WHIP was Pablo Lopez.

The 24-year-old finished 2019 with a 1.24 WHIP over 111.1 IP. The season prior he had a 1.26 WHIP in 58.2 big league innings. That's just about a large enough sample size to determine what Lopez brings in that department. However, there is still a lot of room for improvement and evidence that he will make a leap in 2020, and realistically have a WHIP under 1.20.

Lopez hit the IL with a right shoulder sprain on June 15th after an impressive seven-inning quality start against the Pirates. After that, the right-hander simply wasn’t right for the rest of the season. In three Double-A starts, he had a 21.63 ERA. When he was recalled to the majors at the end of August he didn’t fare much better, really damaging his season-long numbers.

Clearly his numbers are nowhere close to what they could have been if Lopez managed to stay healthy. However, one area he needs to improve regardless of health is his performance on the road. A 7.36 ERA and 1.45 WHIP away from Marlins Park is not going to cut it. Although, those numbers are also slightly misleading.

Lopez was lit up for 10 ER in 3 IP on May 10th and faced a slew of unforgiving road teams. Every single road team he faced was in the top half of the league in runs scored, except one appearance against the Cincinnati Reds.

If Lopez can come into 2020 fully healthy and replicate his pre-injury performance he will far outperform his 396 ADP. At that price, if he doesn’t perform just cut him free, but it is definitely worth the risk due to his exciting upside.

With an ADP of 251, DeSclafani is the highest-drafted player among the three on this list, and yet it still feels like he’s too low. He is often overlooked for a multitude of factors. He plays on an uninspiring Cincinnati Reds team, he’s already 30 years old without a breakout season, and he missed almost two full years of his prime before returning in June 2018. Even if all he does is replicates what he did in 2019 it would be worth grabbing the right-hander at his current ADP. Chances are his numbers do change, they will get better, not worse.

As previously mentioned, perhaps some people believe that at DeSclafani’s age we must have already seen his prime. However, it’s fairly common for starters to have their best years after they turn 30. Secondly, in terms of usage, the former Blue Jay only has four big league seasons under his belt. So, there is plenty more tread left on those tires.

In 2019 DeSclafani threw his four-seamer harder and more often than ever. The 2249 spin rate, 17.6% Whiff rate, and .247 XBA were all career highs on his heater. Actually, the velocity on all his pitches was higher than ever. Clearly the 2011 sixth-round draft pick is growing stronger, as he moves further removed from the devastating UCL injury he suffered in 2017. 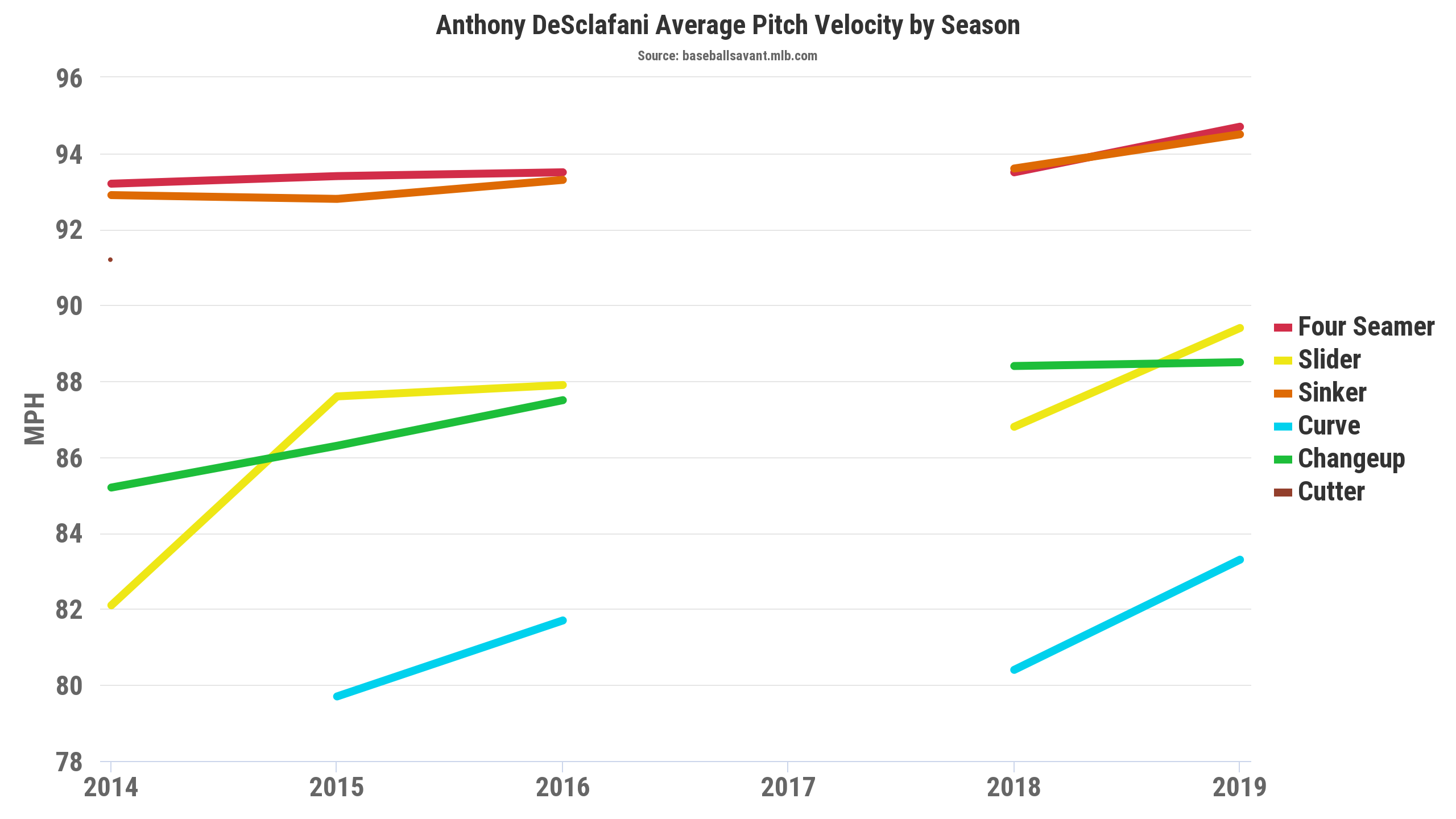 If DeSclafani can maintain his 24.0 K% whilst lower his walk rate slightly from 7.0% to his career average 6.5%, then there is a good chance he may even post a sub 1.20 WHIP. And, if he doesn’t improve, he’ll most likely be a pitcher worth rostering anyway. Another factor working in his favor is that the shortened season should nullify the notion of him being at a heightened risk of injury.

The goal with drafting pitchers in the later rounds is to have them help in counting stats and not hurt in the ratios department. They’re hard to find but whether it’s a young up and comer with a lot of promise, a mid-career breakout candidate, or a veteran reinventing himself, there are options out there.