This fantasy baseball season is going to be strange, and there is nothing you can do to change that. What you can do is try to come up with a strategy that best sets your team up for success in this world of the unknown that currently exists. While we do not know when the baseball season will begin, it is a safe bet at this point to assume we will have a reduced season. Whether it be 80, 100 or 120 games (my guess is around 100), it will be unlike any season you have ever played before.

One way this will impact the fantasy season was brought to my attention on Twitter in a conversation between two very respected fantasy baseball analysts and players: Matt Modica and Rob Silver. The two were discussing how a slow start for a player will be harder to overcome than ever because there are simply fewer games to make up for it. Typically, analysts will say not to panic and to try to buy low during slow starts. However, April is typically just one out of six months. If a batter plays 30 games in March/April, it would be just 19 percent of a regular 162-game season. The same slow start in a 100-game season would equate to 30 percent of the season, indicating that the room for error shrinks dramatically. The smaller the sample size, the more a bad stretch hurts.

It is important to find players that historically get off to slow starts, but there is no perfect science to identify them. Three years is the perfect range because there is too much noise in using just a one-year sample size. I also wanted to avoid going too many years back, because I wanted players to be around the talent level they are now. The stats used are every hitter's April performance from the past three seasons compared to the rest of the season (May-Sept) in the same three-season span. Metrics are used instead of raw numbers (HR, runs, RBI) because a one-month sample is clearly going to be insufficient when compared to five months. Strategically, it is preferable to avoid players with slow starts in a shortened season draft. Rather than draft them and get into an early-season hole, avoid them and attempt to trade for them when the team with them is falling down the standing, panicking quicker than in a normal season.

Avoiding Hitters Who Get Off to Slow Starts

Alex Bregman is a borderline first-round pick, but there are people who are concerned with how the Astros will perform this season. I am more concerned that he has a history of getting off to slow starts. In the last three seasons, his average in the first month of the season is .260, and his ISO is .125. In the rest of the season, his three-year norm for batting average is .294, and his ISO is .268. That is a difference of .034 in average and a whopping .143 ISO. That is the largest gap in ISO in the entire league. And, to make sure there wasn’t just one really bad start dragging him down, I looked at each of the last three seasons individually. In all three seasons, his lowest ISO of any month was the first month of the season.

His April average was a low point in 2018 and the second-lowest of his season in 2017. Additionally, I am not as concerned that cold weather was a factor in that slow start (cause I believe that greatly impacts some players) since the Astros play in a dome. I think Bregman will be the ultimate buy-low player if he gets off to a slow start this season. Those who drafted him will think it is all the boos and such getting to him. You buy him for a discount and get the MVP caliber play out of him. But as for drafting him? This is scaring me off of using a first-round pick on him.

Edwin Encarnacion was a player I was drafting quite often because I believe that he is one of the best values on the board each year. However, he is also a notoriously slow starter. Over the last three seasons, Encarnacion has had a batting average .063 points lower and an ISO .065 lower in April than the rest of the season. I wanted to take it a step further with Encarnacion because he was not bad last April, and the two seasons prior he played in the cold weather in Cleveland. However, April is by far his worst career month in average and ISO. His career average in April is .236, and his ISO is .195. I still think Encarnacion is a good value where he goes, but I am starting to like the idea of letting someone else draft him and buying if he gets off to a slow first couple of weeks.

Giancarlo Stanton is another player I had to take it a step further. I threw away 2019 for Stanton because he hardly played. He got off to a really bad start in 2018, but that could be viewed as circumstantial, as he was in a new league, on a new team, in a cold city no less. But, looking at his career splits, April is by far the worst month of his career. His .251 average and .231 ISO in April are both his lowest in any month.

Stanton is in a weird spot right now. Currently, he is a good value in drafts because he is no longer a lock to miss any time at the start. Due to the suppressed ADP, I am okay drafting him. But, I expect when we have a start date for the season, and it is widely realized that Stanton is healthy, he will climb back up to the fourth or fifth round. If that happens, given his history as a slow starter and the injury risk, I will let someone else draft him and attempt to buy low if he starts slow again.

Anthony Rizzo is a known slow starter. Remember the trend as of late? He would start the season off slowly, and then Joe Maddon would let him hit leadoff for a couple games, and he would get going. Over the last three seasons, Rizzo’s average is .077 points lower in the first month than the rest of the season, while the ISO is .029 percentage points lower. In his career, April is by far his worst average of any month, at .241. The one risk in these numbers is that Rizzo plays in cold Chicago. It will no longer be cold and windy at the start of this new season, but summer weather. I am not fully avoiding Rizzo because of his slow starts in the past, but I will use it as a tie-breaker if I am debating between him and another player.

Yasiel Puig has two things working against him in the early part of the season: he still does not have a team, and he is historically a slow starter. Over the last three seasons, his average in the first month of the season is .207, while his ISO is .141. The average is 0.72 points lower than his rest-of-season norm, while the ISO is .088 lower. Puig is sort of in a unique scenario. He is quickly falling in drafts: I got him in round 19 of a 15-team draft last week. At that price, he is pure upside. But, if he signs with a team, I expect him to shoot back up draft boards, and in that case, I would be avoiding him.

Yuli Gurriel has sported an average that is .035 points lower in April and an ISO that is .053 points lower. Gurriel has struggled out of the gate in recent seasons, including in 2019, when he had a career year. There is a lot working against Gurriel; one is that he is coming off of a career season where he put up numbers that he could only dream of prior to last year. I have a tough time buying into a player coming off a career season, especially one with an unpleasant Statcast profile (see below). He also has to deal with all the scrutiny that the Astros will face this season and will no longer have the privilege of knowing what pitch is coming. Add in the fact that he is a slow starter, and Gurriel is a hard pass for me. 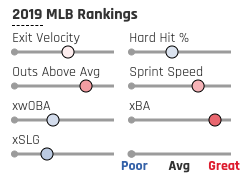 There is one team that has been plagued by offensive slow starts, and that is the Rockies. You can pick any of their big bats, Trevor Story, Nolan Arenado, Ryan McMahon, Charlie Blackmon, and they are all worse in April. In fact, Blackmon is the only one whose ISO is not lower in April than the rest of the season, while all of their averages are lower than the opening month.

The one caveat is they typically open the season in Denver when that Rocky Mountain cold air is still present. As the weather heats up, we know these bats will. Now they will be starting when it is warm, so the weather vs slow starters will really be tested here. Of all the players listed, the Rockies bats are the ones I am least scared off of due to a slow start. But, you best believe if any of these guys start off slow, I will be looking to buy for a discount.

Others with a Worst Average in the Opening Month

Next to the players' name will be the decrease in average a player has in April, compared to the rest of the season. In Parentheses will be their three-year April average and then the three-year rest of season norm.

Others with a Worst ISO in the Opening Month

Next to the players' name will be the decrease in ISO a player has in April, compared to the rest of the season. In Parentheses will be their three-year April average ISO and then the three-year rest of season norm.

Again, this is not a perfect science as there are variables such as weather and circumstances that could affect early-season performance that we simply can't quantify. However, finding players that have a history of getting off to slow starts is the best way we can quantify those who get off to a slow start. And in a shortened season, a slow start can bury a team in the first month or so, since there is simply less time to recover.