The last days of the baseball season are almost upon us. Those who are still here reading up on advanced sabermetrics are undoubtedly scouring for the best information to make a final push to win their fantasy leagues (thanks to Rotoballer!) or are simply baseball junkies. Either way, I'm glad you're here.

As usual, this space will be used to identify starting pitchers widely available on the waiver wire that might be hidden gems or undervalued based on Statcast metrics.

This week, the focus is on wOBA-xwOBA to find the biggest underachievers and potential ratio risers. Listing a player doesn't imply a waiver wire pickup recommendation. Read each player blurb to make a determination based on the information provided. Good luck down the stretch!

Another pitching prospect coming through the pipeline, Rogers was on the radar before Sixto Sanchez ever joined the fray. Rogers was the team's first-round pick in 2017 and has the chance to establish himself as part of one of the best young rotations in the game.

His first three outings were rock solid, as he stretched up to six full innings and held a 3.00 ERA and 1.20 WHIP after striking out 10 Rays en route to a quality start. Then Philadelphia happened. Rogers got blown up and lost the trust of fantasy managers as a result. In that game alone, he gave up seven batted balls over 102 MPH, five of which went for extra bases. 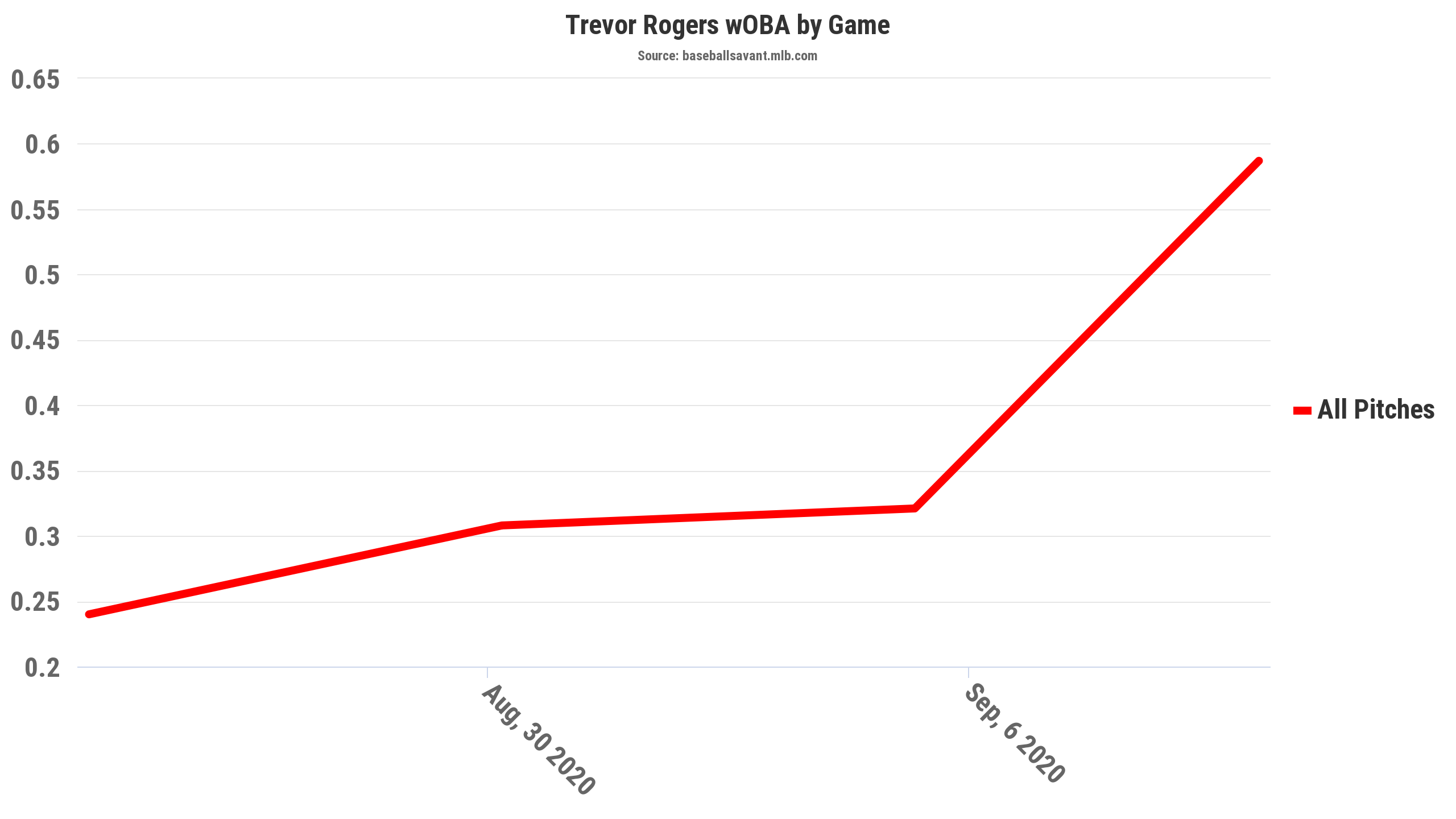 While Rogers was certainly off in that game, his overall luck should be much better as he is the top underachiever in wOBA-xwOBA among starters. He kept his xBA under .200 in each of the first three starts and ranks among the leaders in that category. More importantly, his K% ranks in the 85th percentile with 26 K in 18 1/3 innings.

Rogers is rostered in just 8% of Yahoo leagues but will face the Boston Red Sox next followed by the Nationals and Yankees. Not many starters are guaranteed three more turns the rest of the way, so that works in his favor as well. Even if you don't roll with him vs New York, he has a great chance to succeed in his next two outings.

Small sample size has come into play all year and that is especially the case with Martinez. He was activated off the IL less than a week ago after spending a month on the shelf. Stuff has never been the issue with C-Mart, it has been command and health.

His two starts since returning haven't been promising, although neither was his first one before getting injured. Martinez has allowed seven runs on 13 hits over the last 7 2/3 IP. The good news: he only walked three batters and punched out 11.

His hard-hit rate currently sits at 54.8% which, aside from being mind-bogglingly high, is unsustainable. A far lower xwOBA than wOBA, a low walk rate, and the inevitable regression in exit velocity are factors that conspire to make him a decent streamer the rest of the season.

His velocity is down nearly three MPH on the fastball and sinker, which are certainly reasons to be wary. If he can work his arm back into shape and get his sinker to start sinking back to typical rates, he will be worth adding. Given the fact he may face the Pirates next time out, it may not matter - add him anyway.

The 2020 version of Boyd is an enigma wrapped in a mystery. Once thought to be a great draft sleeper, Boyd burst that bubble quickly. He reached a 10.24 ERA after his fourth start by allowing four ER in his first two outings and then seven ER in each of the next two. Much of that came via the long ball, as he allowed five taters in the first four games. So much for pitcher-friendly Comerica Park.

It appeared he was turning things around in late August, allowing eight earned runs and 17 hits over a 21-inning stretch while holding batters to a .213 average and whiffing 29. Those four starts made us believe he was back...

Boyd was blown up by the Brewers and promptly dropped by thousands of fantasy managers who were ready to ride him down the stretch. Can Boyd bounce back for the final weeks of the season?

His overall Statcast profile is ugly but his season-long .366 xwOBA ranks in the upper half of all pitchers with at least 25 plate appearances against. He is underachieving compared to his unsightly .402 wOBA but it's been far from consistent. One look at his rolling xwOBA could be dizzying. 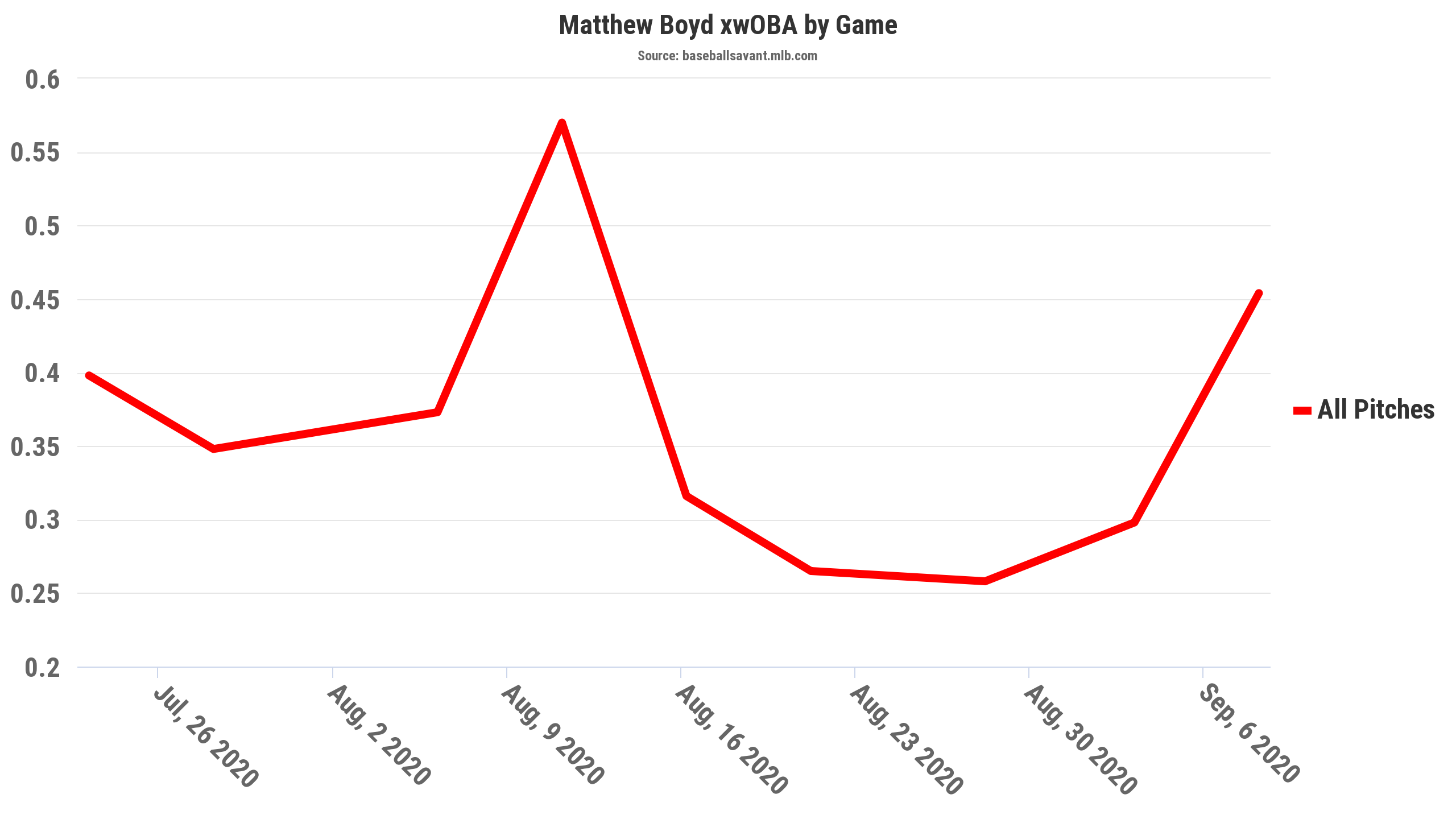 Can Boyd even be remotely trusted during these crucial final days? He faces the Royals next, who rank 21st in OPS and 25th in OBP. This is a team currently on a six-game winning streak though, buoyed by the recent return of Salvador Perez. Boyd can provide strikeouts and a chance for a solid start but the risk is high.

Eflin's name keeps popping up in this column, particularly three weeks ago as one of the leaders in CSW% (called strikes + whiffs). Fellow Phillies starter Spencer Howard also makes the cut but he was highlighted more recently and, as a rookie, is harder to trust down the stretch in fantasy playoffs.

Between the excellent 22.6% K-BB% and .298 xwOBA, Eflin really ought to be doing much better yet his ERA still sits at 5.01. Statcast believes it should be nearly a run and a half lower with a 3.5 xERA, mainly because his wOBA and BAA are 50 points higher than expected.

Eflin hardly puts batters on through shaky command but his insistence on throwing strikes can lead to opponents stringing together hits in bunches, which is why he has only one quality start on the season. His next start comes against the Mets, who have put up huge offensive numbers in the past week. But hey, what goes up must come down, right?

Eflin is a risky start next week but may be more palatable in his final start, likely to be against a Nationals team that should miss the postseason a year after winning it all.