Third base is arguably the deepest position in fantasy this year, with plenty of highly productive options outside of the first 20 third basemen being drafted. The position is so deep that if a player isn’t a lock for an OPS above .900, doesn’t have positional versatility, or doesn’t offer stolen bases, then they may not be worth drafting with a top 100 pick.

Waiting on a position with hopes of getting a target player in late rounds can be a risky strategy, but with the number of quality mid- and late-round options at third base, it’s likely the smart play. That being said, the truly elite players -- Alex Bregman, Anthony Rendon, Jose Ramirez, and Nolan Arenado -- are exceptions to that rule.

With that in mind, below are third baseman to wait for and those to avoid in earlier rounds. Picks between 150 and 250 offer several solid third base options, so keep that in mind when preparing for drafts.

These players could still be very productive in the coming season, but may not return the type of investment required at their current ADP given how deep third base is in 2020.

Devers comes with far too much risk for his top 25 ADP, especially when considering that he plays at a position as deep as third base. Devers’s breakout last season was built on a decreased strikeout rate and a power bump, both of which raise questions regarding his ability to recreate or improve upon his 2019 performance in 2020.

Devers’s strikeout rate dropped from 24.7% in 2018 to 17% in 2019, but it came without a significant improvement in plate discipline or contact, as neither Devers’s swinging-strike rate (12%) nor his contact rate (77.9%) were much better than his career averages in those categories. Although Devers’s significantly improved o-contact rate (71.9% last season compared to his 63.5% mark in 2018) is encouraging, it isn’t enough to justify such a significant decrease in his strikeout rate.

Similarly, Devers’s power bump was likely legitimate last year, but it wasn’t enough to suggest that his performance is sustainable. Devers set career-highs in both average exit velocity (92.1 mph) and hard-hit rate (47.5%) last season with both marks ranking near the top of the league. Even so, Devers’s .519 xSLG was 36 points lower than his actual .555 SLG, and his .295 xBA was 16 points lower than his actual .311 batting average. As a result, Devers is likely to see his batted ball performance decline in 2020.

Devers’s likely unsustainable strikeout rate and reliance on luck in 2019 suggest that despite his improvements, an OPS below .900 is a legitimate possibility in 2020. Since Devers doesn’t offer much outside of his hitting, there’s little reason for fantasy owners to spend an early-round pick on the 23-year-old. If you want power at a similar price, draft J.D. Martinez, a healthy Aaron Judge, Austin Meadows, or Xander Bogaerts and wait to draft a third baseman.

Sure, Machado got unlucky last year with his .274 BABIP, but even at his best Macahdo probably isn’t worth drafting at his 60 ADP. Machado’s OPS has eclipsed .900 just once in his career, and he’s averaged a solid but somewhat underwhelming .845 OPS over the past five years.

The reality is that although Machado offers impressive durability, has played strong defense in his career, and hits the ball hard, his fantasy production has been unexceptional. 14 third baseman accumulated at least 500 PA and posted an OPS of at least .845 last season, relegating a typical year from Machado into mediocracy.

This isn’t to say that Machado lacks any value -- he’s a threat to steal double-digit bases if the Padres decide to be more aggressive on the basepaths, and he’ll likely post an OPS north of .800 -- but fantasy owners should be able to get similar production at third base around 100 picks later than Machado’s ADP. Pitchers aside, fantasy owners would likely be better off drafting Anthony Rizzo or Max Muncy at a similar price.

Chapman is a strong hitter with elite power and a solid plate approach, but he just isn’t worth his ADP. Chapman’s 92.6 mph average exit velocity and 48.7% hard-hit rate both ranked near the top of the league last season, helping propel him to a .506 SLG.

Chapman also rarely chases pitches outside of the strike zone with a 24.8% o-swing rate, and makes contact at a solid 78.1% clip, resulting in a 21.9% strikeout rate. That’s all good, but fantasy owners can get similar production at third base later in drafts, making Chapman overvalued.

Chapman isn’t an awful value at his 88 ADP, but Josh Donaldson and Yasmani Grandal are both likely better values at a similar price, and fantasy owners can afford to wait another couple of rounds before drafting a third baseman with an OPS around .850. Drafting Chapman at pick 88 probably isn’t going to ruin a fantasy team, but teams would be better off drafting other players at the same pick before taking a similarly productive third baseman in later rounds.

The following players may not be league-winners or massive sleepers, but they are likely turn a profit in fantasy drafts.

Projection systems unanimously expect Turner to post an OPS north of .830 in 2020, and that number likely represents something much closer to his floor than his ceiling. Turner displayed strong power in 2019 with a 90.2 mph average exit velocity and a 43% hard-hit rate, helping lead to an impressive .410 xwOBA on contact.

Turner also offers elite contact skills, with his 76.1% o-contact rate ranking 13th among qualified batters and his 7% swinging-strike rate ranking 16th. That desirable combination of power and contact skills allows Turner to consistently post an OPS above .850 with a strikeout rate below 20% (16% last year). In that same vein, Turner has ranked among the top 10% of hitters by xwOBA in four of the past five seasons, and nothing about his 2019 season suggests that he’ll take a significant step back in 2020.

The downside to drafting Turner -- and the reason his ADP is so low -- is injury concern. Turner has played in an average of 130 games over the past four seasons, playing in more than 140 games just once in that time. Consider the following, though: if Turner posts a .850 OPS, plays in just 120 games (or the proportional amount in a shorter season) -- something that he’s done comfortably in three of the past four years -- and is replaced in fantasy lineups by a player with a .730 OPS, then the combined OPS out of that lineup’s third base slot would be .820.

Not many players are effective locks for an OPS well above .800, hit in the middle of what is arguably the best lineup in baseball, and are drafted below 150, making Turner a bargain at his 159 ADP.

A popular sleeper pick last season, Dozier enjoyed a breakout year with a .279/.348/.522 slash line. Encouragingly, Dozier’s breakout largely appeared to be based on skill rather than luck. Indeed, Dozier displayed well above-average power with a 91.1 mph average exit velocity and a 42.6% hard-hit rate, supporting his 11.8% HR/FB ratio and 11.1% extra-base hit rate.

Dozier’s contact skills were also solid, as he posted a strong 90.4% z-contact rate and an 11.5% swinging-strike rate which (combined with his 30.1% o-swing rate and 66% z-swing rate) support his 2.69 K:BB. Dozier’s biggest flaw is his inability to hit pitches outside of the strike zone, with his 50.1% o-contact rate ranking sixth-worst among players with at least 500 PA. Concerningly, Dozier’s o-swing rate jumped in the last month of the season, helping fuel a poor 34.7% strikeout rate for the month. 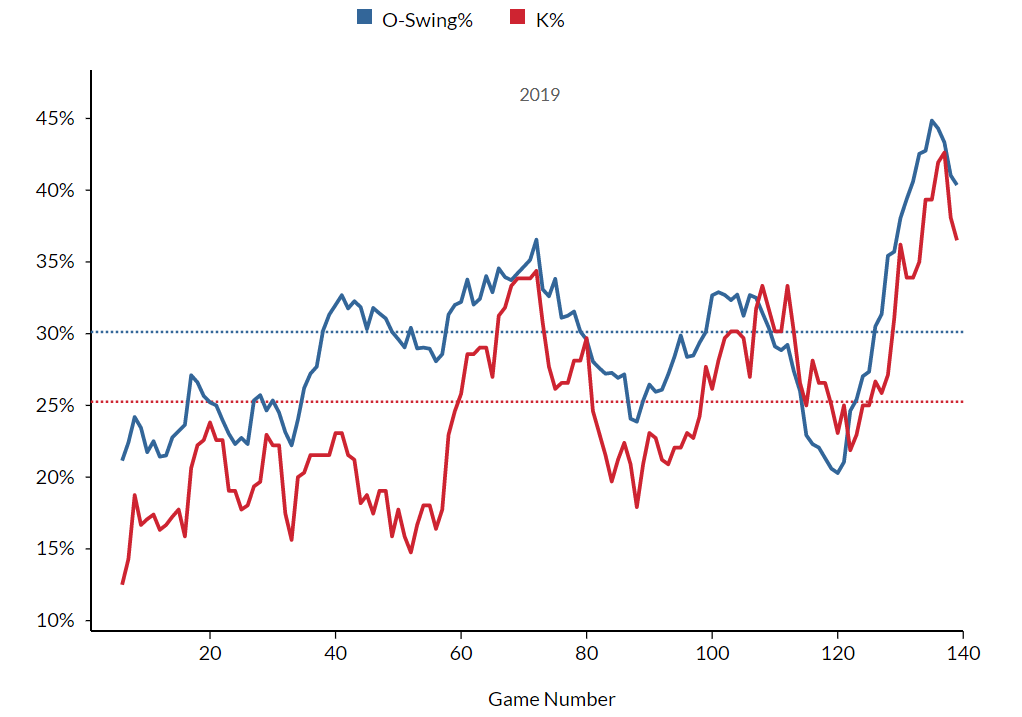 If Dozier can manage to keep his o-swing rate down around 30% (like he did most of last year) for the entire season in 2020, then his strikeout rate should fall towards 20%. Dozier’s .339 BABIP was likely a little higher than earned last year, but his overall performance from last season suggests that he’s likely to post an OPS above .800 with the upside to hit .900. That makes Dozier a strong value pick at his 179 ADP.

Despite posting a 116 OPS+ in both 2018 and 2019 (albeit in somewhat small sample sizes), Diaz is being drafted outside of the first 200 picks in drafts on average. Importantly, Diaz combines strong power, an elite plate approach, and solid contact skills that make him a likely breakout candidate in 2020. Diaz posted an impressive 91.7 mph average exit velocity last season along with a 44.8% hard-hit rate. Additionally, Diaz’s 97 mph average exit velocity on fly-balls and line drives ranked 11th in the league last season.

Diaz’s impressive power doesn’t come with the expense of a high strikeout rate, though. Diaz does an excellent job of being selectively aggressive at the plate, as his 47.3% z-swing - o-swing rate would have ranked 11th among qualified batters last season -- one spot ahead of Joey Votto. Furthermore, Diaz’s solid 79.3% contact rate and 9.3% swinging-strike rate help keep his strikeout rate down.

As a result of his strong plate approach and solid contact skills, Diaz posted a 17.6% strikeout rate and a 10.1% walk rate, both significantly better than the league average marks. Diaz isn’t perfect, but he has the profile of a hitter who can post an OPS near .900 and is unlikely to post an OPS below .800.

Drafted Justin Turner and need a depth piece that will post an OPS above .730 this year? With a 417 ADP, Longoria is your guy. Longoria put together a solid season last year with a .762 OPS, and his solid power (89.7 mph average exit velocity) and contact skills (10.9% swinging-strike rate) suggest that an OPS above .750 is likely again in 2020.

There aren’t many safer picks than Longoria after pick 400 at any position, and he’s an ideal deep option for teams needing third baseman in the final rounds of drafts.