Just a year ago, we were bemoaning how boring the tight end position was in fantasy football. There was Travis Kelce, Zach Ertz, George Kittle and a bunch of scrubs. Everyone else was lumped into an unappealing mass of nonproductivity. Then the season came and names like Darren Waller and Austin Hooper emerged as studs, not to mention the late-season surge of Tyler Higbee. There are plenty of ways to pivot at this position in 2020, so selecting the best combination of players doesn't have to mean go early or bust.

We'll keep updating our rankings for Best Ball and every other format throughout the offseason. You can find the latest rankings here. Now, let's give the tight end position some attention.

The big three is down to two. Kelce and Kittle are both worthy of second-round picks if you want to lock down a stud tight end early, which doesn't seem as important as it was a year ago but it still a solid strategy. It's less important in best-ball, where the concern over which lowly target-monger to stream on the off-chance he might grab one in the end zone is Eliminated. In BB10 leagues, you could conceivably cobble together a roster with three players residing between tiers 3-6 and come away with adequate production, especially if a player like Noah Fant, Mike Gesicki, or Jonnu Smith breaks out.

As outlined by Chris Allen of 4for4.com, FFPC best-ball drafts must be handled differently due to expanded 28-player rosters and a TE premium in scoring. Here is a view of the top winning roster constructions from 2019. 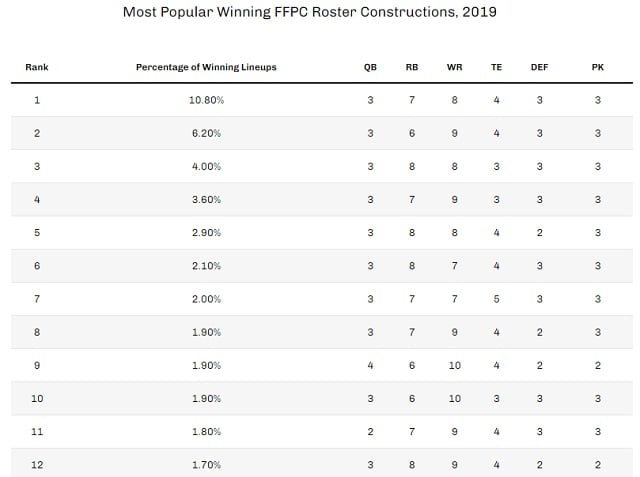 Drafting four tight ends seems to be optimal and waiting too long for your TE1 could be a mistake. Most of the top early-round roster constructions have at least one TE going in the first six rounds. As of now, pre-NFL Draft ADP data shows 10 different tight ends being selected within the first six rounds. Kelce and Kittle are both gone by pick 14. If you decide to make this position a priority in FFPC, it will require use of your first draft pick most likely. I wouldn't advise selecting one of these studs over the top-five running backs, but either one is fair game after the sixth spot.

In best-ball leagues where tight ends don't enjoy a premium for scoring, it's logical to wait if you miss out on the big two but that isn't happening. Early BB10 ADP has nine TEs selected in the first six rounds, which is nearly the same as FFPC. Considering that every one of the players outside the top-five has legitimate questions surrounding his value, I suggest striking early if you can land Kelce or Kittle in round two or playing the waiting game to start selecting tight ends from tier three and lower.

While Ertz had a down year compared to 2018, he still came away with 88 receptions and 916 yards. That placed him fourth at the position in fantasy scoring, which is where I have him ranked. Ertz still has Dallas Goedert competing for targets whereas Mark Andrews no longer has to worry about Hayden Hurst. The two were neck-and-neck in red-zone targets, Ertz having caught 10 of 20 while Andrews grabbed 11 of 19. Andrews cashed in more often, however, scoring 10 TD compared to six for Ertz. If you look at red-zone usage from 2019, Andrews is right up there with last year's top tier:

While many people remember Andrews for his splash plays but he was a consistent part of the offense and was heavily featured where it matters most. The Ravens didn't make any moves to bring in a receiver and won't be drafting a tight end early, so Andrews should be one of the top targets for last year's MVP, Lamar Jackson, once again. That makes him a borderline Tier 1 fantasy TE and decent consolation prize if you want to strike early but not with a top-20 pick.

We're all over the map on Higbee. Mike is most bullish, ranking him fifth among all tight ends at 66 overall. Phil isn't buying last year's sudden surge, dropping him down to 155, or 16th at the position. That puts me in the middle, although my skepticism could grow. I do realize that the departure of Brandin Cooks and Todd Gurley reinforces the fact that the Rams will keep throwing to the tight end frequently, as they did while Cooks was out last year.

The problem is that Higbee's run of 8.6 receptions and 104.4 yards per game from Weeks 13-17 coincided perfectly with Gerald Everett's absence. That productivity might be split between the two, making Higbee more of a low-end TE1 than a breakout candidate. Remember, Everett is supposed to be the pass-catching TE while Higbee's job is mainly to block. At least it was until they realized he could catch too.

Yes, I have Hockenson as my TE16 and that's intentional. It's not that I doubt Hockenson's ability. I'm just not buying into any tight end in a Lions uniform (or running back). This team will be forced to pass a ton again because their defense will still be terrible, but Hockenson just doesn't deserve to be ahead of Fant, Gesicki, or even Goedert.

We know rookie tight ends rarely make a fantasy impact, so it was actually encouraging to see Fant put up some nice games in the second half. They didn't spend a first-round pick on him to make him a blocker, so expect the target share to increase. The entire Denver offense should take a step forward with an experienced Drew Lock, Melvin Gordon in the backfield, and new offensive coordinator Pat Shurmur, who has just a little bit of NFL experience. It didn't work out as a head coach, but in his previous stint as OC he helped Kyle Rudolph post 83-840-7 season in 2016, with Zach Ertz posting similar numbers the previous year despite having Sam Bradford at QB. If I'm one of the last in my league to grab a starting tight end, I want it to be Fant and I'm willing to reach higher than his current 131 ADP, as you can see by my 101 overall ranking.

Don't get me started on "OK" Howard, who has been stunningly mediocre for a first-round pick, averaging 2.5 receptions and 38.3 yards per game over the first three years of his career. Blame Bruce Arians' offense all you want, but the coach himself made it clear after just two weeks of regular-season play that Howard wasn't putting in maximum effort. Arians stated "he can play a heck of a lot better than he's playing." Nothing changed and Howard proceeded to score once all year, never eclipsing 75 yards in a game. Don't get sucked into the notion that Tom Brady loves throwing to tight ends and therefore this will be Howard's year... draft Cameron Brate later instead.

The Tier of Misfit Tight Ends? Three of these players are on new teams this year and Herndon is still a mystery after missing essentially all of 2019 due to injury. There may still be some juice left in Olsen as he heads to TE-friendly Seattle. Keep in mind that he could be on his last legs and will have to compete with Will Dissly for targets.

Ebron is very enticing as he heads to Pittsburgh, but it might be wise to remember how Vance McDonald flopped last year and how Ben Roethlisberger has never really favored throwing to the position. Ebron's one glorious season of 13 TD will forever stick in our memories but it won't ever repeat itself.

Hurst will be the most interesting sleeper of this bunch, as he moves to Atlanta with franchise passer Matt Ryan. Austin Hooper was the top-scoring fantasy tight end last year until Week 10 when he was forced to miss the next three games due to injury. Hurst won't pay off in the same way because it will take time to familiarize himself with the offense and earn Ryan's trust. He could provide similar numbers to Hooper's 2018 season, which would be 660 yards and four touchdowns. Don't expect a breakout season, in other words.

In our latest podcast breaking down 2020 dynasty rankings at tight end, Chris Mangano and I identified Jack Doyle as a sneaky buy-low pick. He is part of a Colts offense that is still severely lacking at receiver, didn't add anyone in free agency at the position, and lost his main competition for targets in Eric Ebron. They also added Philip Rivers, who aside from being a more accomplished passer than Jacoby Brissett, is the same guy who made Antonio Gates a Hall of Famer and Hunter Henry a reliable fantasy asset. Doyle could easily reach a career-high in targets and finish as a top-10 TE. Unless the Colts do something major in the draft such as adding a tight end in the second round or a receiver in the first round, Doyle figures to be a great value.

As far as rookies go, besides the fact we still don't know where they will wind up and opportunity is everything, this isn't the position where a first-year player is likely to pay off. Even the top guys like Noah Fant brought minimal return on investment considering he had two monster games in Week 9 and 14, yet only surpassed the 50-yard mark two other times and scored a total of three TD. The ROI relative to ADP just isn't equitable.

The best tight ends worth pursuing as a third option after pick 200 (in BB10s or drafts with 20 rounds) are: Jace Sternberger, Tyler Eifert, Cameron Brate, and Gerald Everett.

I've already discussed how Everett could wind up sharing targets with Higbee, so you could get comparable production about 130 picks later.

Sternberger figures to be the biggest gainer from last year, assuming the Packers don't draft a tight end early. With Jimmy Graham gone, the second-year man has a chance to at least deliver TE2 fantasy figures as a TE3 price.

Eifert has been left for dead by the Bengals and many a fantasy owner, but he may have something left in the tank. Eifert's medical history is obviously the concern here, which is why he can't be more than a third tight end.

Per PlayerProfiler.com, here are the injuries he's suffered since 2015 alone: 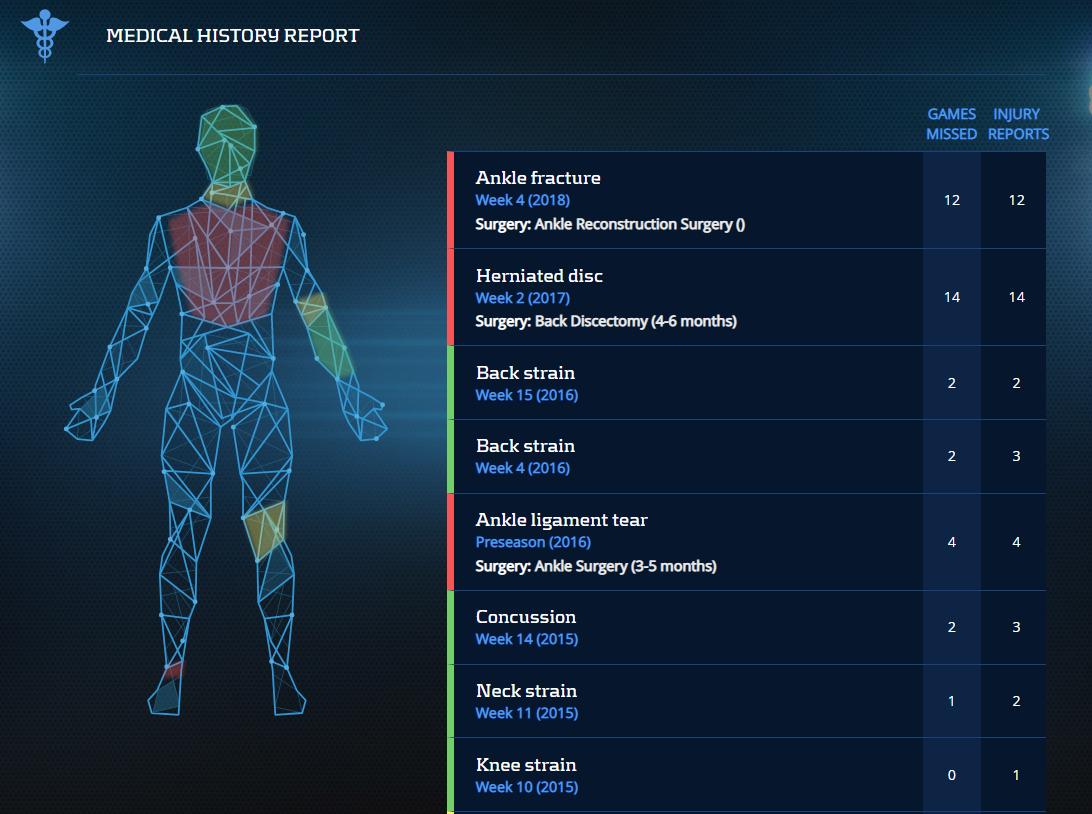 Eifert is not quite 30 years old and was signed for two years and $15 million dollars by Jacksonville. That's not backup money at the tight end position and this team is without a clear starter. Last year's third-round pick, Josh Oliver, caught all of three passes as a rookie. James O'Shaughnessy led Jags tight ends with 14 receptions for 153 yards. Eifert could fill a role for this team in the red zone, especially as they didn't add any free agents at wide receiver and figure to stick with a conservative offense.

Are the Bucs going to use a two-TE approach with Tom Brady a la the 2011 Patriots? Will they find a trade partner for the underused and underachieving Howard, possibly Brady's old team? These are both unlikely scenarios, so don't assume that Brate will be putting up top-10 TE numbers.

Bruce Arians' offense doesn't favor one tight end, much less two, and that won't completely chance, especially with talented wideouts like Mike Evans and Chris Godwin on the field. Howard won't be a free agent for another year and even during the 2019 season, the Bucs reportedly wanted a substantial offer to consider moving Howard. Brate is a nice third tight end, but don't reach before the final round or two for him.