As mentioned in my article covering 1B that we might be over-drafting, my goal in these articles is to point out players who might "bust" at their current ADP. The definition of a bust that I'm using is when you invest a large amount of draft capital in a player who doesn't hit the production needed to bring back value at that cost.

For example, if you take a shot on Pirates right-hander Mitch Keller in the 15th round of a 12-team league and he doesn't pan out, that's not a bust. What he was projected to give your team is easier to replace with a free agent, or playing your cards right with streamers. On the other hand, if you take somebody in the first 13 rounds of a 12-team league (within the top 156 players) and they don't hit, it likely means you've missed out on the production that should have been available at the same draft slot.

Below, I've flagged a few second basemen who are being drafted inside bust territory who present more risk than I'm personally comfortable with at their ADP. While some of them might not wind up being the textbook definition of a bust, my hope is to help you limit risk and missed value in the early part of your draft. (All ADPs listed have been calculated using the date range 3/16/20 to 4/16/20 for NFBC Online Championships)

If Torres played half of his games against the Orioles, I might take him here. As it stands, I think Torres is a good player whose value is being driven up by the fact that he plays for the Yankees at a position that many assume is weak for fantasy.

Last year, Torres had a strong season, hitting 278/.337/.535 with 38 home runs, 90 RBI, and 96 runs scored. He supported those numbers by finishing above the MLB average with a 10.1% barrel rate and an average exit velocity of 89 MPH. However, when you dig a little deeper, you begin to see some holes in those numbers and a Statcast page that is not indicative of a top-30 player. 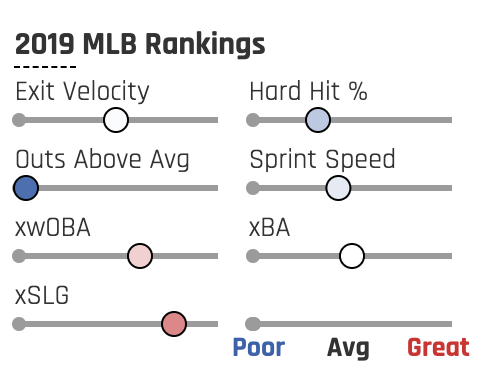 Keeping in mind his x-stats, Torres is likely a .265 hitter who will finish around 30 HRs in a good lineup but will only chip in five stolen bases. I just described Nicholas Castellanos or Marcell Ozuna, who are both going just before pick 100. I understand that Torres plays a shallower position, but position alone shouldn't justify upwards of 60 picks separating players with similar skill sets.

We've been down this road with Villar before. Everybody wants steals, so we're more than happy to reach up in the draft to get a guy that we think could push for 40 stolen bases and win us the category. Yes, Villar will contribute steals, but he better be sure to give you help in other categories if you're going to take him inside the top 40 -- I'm just not convinced that he can. 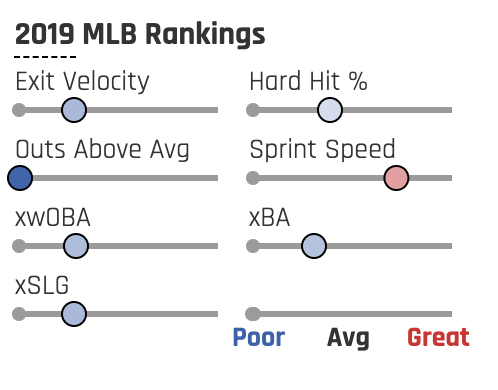 There is so much blue there. Way too much blue. Anytime you see that much blue, you should be worried, and that's no different with Villar. While he hit .274 last year, his xBA was .249. He slugged .453, but his xSLG was only .412, and his xwOBA was .313 which is concerningly low for a leadoff hitter.

What's more, he makes only 7% more hard contact than he does soft contact, and he continues to chase pitches out of the zone at a 27.7% rate. His 16.1% K%-BB% is also not ideal for a leadoff hitter, and his 24 home runs last year were clearly influenced by his hitter-friendly home park and the questions surrounding the ball since he had league average exit velocity and had an average launch angle of only seven degrees.

Moving to a more pitcher-friendly park, Villar is in for clear regression in the home run department, and the arguably weaker lineup behind him may lead to fewer runs. He'll likely be a .250 hitter with 15 home runs and 35 stolen bases. You'll like the stolen bases, but he won't give you enough else to warrant a top-40 draft pick.

While still producing a solid batting average, Merrifield's K% went up last year while his BB% went down. His barrel% dropped, and both his 86.4 MPH average exit velocity and 28.9 Hard Hit% are below league average. However, Merrifield was never really being drafted for his bat; his value was always connected to his legs.

His Statcast Sprint Speed declined slightly in 2019, but the bigger concern for me is his Home-to-First time, which Jeff Zimmerman discussed as being more indicative of a player's fantasy-relevant speed year over year.

Merrifield's 4.23 home-to-first time puts him 97th overall in the league and in the company of players who have solid speed but not exactly the game-breaking kind. In fact, Brandon Lowe plays the same position as Merrifield, has more power, and hits in the better lineup. If the two of them have similar speed metrics then why is Lowe going pick 204, almost 150 picks after Merrifield?

I know that this isn't going to be a popular opinion, but I just don't see the major breakout potential that others see in the younger Biggio. To be clear, his ADP above isn't bad, but he's been also going inside the top-100 in certain drafts, so I wanted to include him at the end here as a word of caution.

First, let's take a look at his Statcast page below. 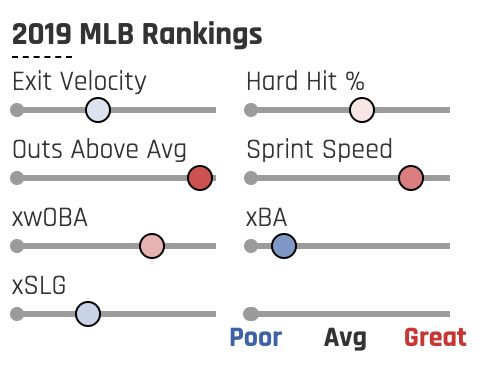 He's now slow with a Sprint Speed of 28.3, good for 125th in the league (tied with Bryce Harper, Jordan Luplow, and Adam Eaton), but his home-to-first time was 4.35, which puts him in company that you don't necessarily want to see from a player that you hope will steal 30 bases.

So, he's basically as fast as Adam Duvall by both major speed metrics -- that doesn't exactly inspire confidence. He stole 14 bases last year but was caught stealing zero times. That won't last, especially as he starts to run more; even the fastest players will get caught stealing a few times. However, I do think as often as the Blue Jays seem to allow Biggio to run, he should be able to steal 20 bases in a full season -- I'm just not seeing 30.

I also don't buy the home run output jumping up much more. He doesn't hit the ball excessively hard. His 88.7 mph exit velocity is basically league average, and his Hard Hit% actually decreased as the season went on before a late September spike. His xSLG suggests that his .429 SLG% was earned and he's going to need to make adjustments to his 20.1-degree launch angle if he wants to drive balls out of the yard with average exit velocity, even in a small park.

What's more, is that he's 28.6 K% is troublingly high for a non-power hitter who hopes to hit at the top of the order. Yes, his batting eye is elite, which means his OBP will likely always be high (and gives him extra value in leagues that value that), but it's rare for players with a K% that high to hit in the top two spots in the order given how important it is for them to get on base in front of the power hitters. If Biggio can't lock in a top-two spot in the order, then his run totals would take a sizable hit.

Based on rbEDV, a 20-20 player who hits .267, drives in 65 and scores 80 runs would be worth the 100th pick. That hypothetical player would have a batting average 30 points better than Biggio's and also score more runs. Which is to say that Biggio's current average ADP of 124 is fine, but I would caution against you being one of the people who jumps to take him around pick 100.