But, as we have seen many times before, that is not always the case. The key is to differentiate those pitchers that just had a change in luck and those who made changes in their approach that led to the second-half success. Those pitchers that make adjustments, those are the ones you want to be buying the following season.

In this article, I will identify starting pitchers that made the biggest improvements in the latter half of 2019 to help you find undervalued draft targets.

No matter which stat you want to use, Yu Darvish jumps off the page. He pitched to a 2.76 ERA in the second half, with a 2.37 xFIP, 37.8 percent strikeout rate. His numbers are even more impressive considering he was a waiver wire-level pitcher in the first half.

The improvements were both across the board and substantial. His second-half xFIP was 1.88 runs better than his first half, while his WHIP improved by 0.53, both the largest improvement from first to second half among all pitchers. His second-half ERA was 2.25 runs lower than his first half and his FIP was 2.48 lower in the second half, both in the top three improvements of all pitchers. So what changed? Quite a lot actually.

First, Darvish changed up his pitch arsenal in the second half. He reduced the use of his fastball by 12 percent in the second half compared to the first, while also reducing the usage of his slider by six percent. In their place, he threw his curveball and cutter each seven percent more of the time, while mixing in his split-finger four percent more often in the second half. Additionally, Darvish changed his release point throughout the 2019 season (this was brought to my attention in an article by Eno Sarris). As you can see in the picture below, his release point climbed throughout the season: 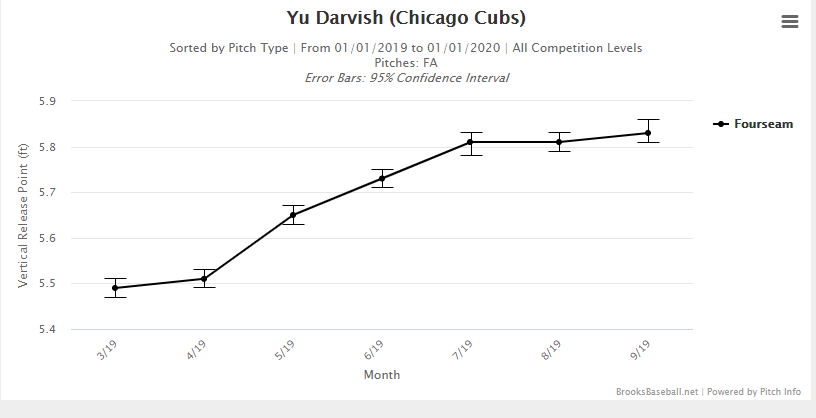 That is two tangible changes Darvis made throughout the season. And the scariest part is, he just kept getting better down the stretch. In the final two months, he had the best xFIP among pitchers (1.94), as well as the second-best strikeout rate (40 percent) and K-BB rate (37.7 percent). Still not sold? He had the third-best swinging-strike rate (16.1 percent), the second-best chase rate (38.5 percent) and the third-lowest contact rate (67.7 percent).

Darvish was absolutely elite in the final two months and the fact that there are changes in both his arsenal and release point means that you can buy into those numbers. Darvish is my SP10 heading into the 2020 season and could finish as a top-five pitcher if things break right. Elite Darvish is back and you should be buying in especially since he is currently the 19th pitcher off the board.

Max Fried had the 28th largest improvement in ERA in the second half compared to the first. But with Fried, it is more about what his second-half numbers were, rather than the improvement from the first half.

Fried made those improvements by throwing his slider six percent more, in place of his curveball, which he cut down by four percent and his changeup which he reduced by two percent. Fried already possessed swing-and-miss stuff evident by his career 24.8 percent strikeout rate and 11.3 swinging strike rate.

What he showed in the second half is that he is learning how to harness his full arsenal and get max production (pun intended). He is currently the 50th pitcher off the board at 137.64 overall. It is not cheap, but there is definitely plenty of upside to return on that investment. Fried is a target in all drafts.

Fried isn’t the only Braves pitcher that made strides in the second half last year. He isn’t even the only one with the same initials as me! That’s cause Mike Foltynewicz started to return to form after a pretty terrible first half. He pitched to a 2.65 ERA in the second half after a 6.37 in the first half, good for a 3.72 difference.

As for his arsenal, he did make some minor changes. He threw his slider four percent more in place of his curveball (-1 percent) and changeup (-2 percent). If you remember, Folty pitched to a 2.85 ERA with a 27 percent strikeout rate in 2018. But, he suffered a right elbow bone spur in late March last year that forced him to miss 25 games.

He also struggled with mechanical issues, according to reports, upon returning from the IL. Those issues looked to be behind him in the second half. The strikeout upside alone makes him a worthwhile gamble as he is going just outside the top-75 pitchers and 200 players overall.

Coming into the season I was ready to fully write off Noah Syndergaard. After being burned again in 2019, I thought I would add him to my avoid list in 2020. That was until I took a deeper look into his second half. In the first half he pitched to a 4.68 ERA with a 3.99 FIP, 4.26 xFIP, 1.28 WHIP and a 22.8 strikeout rate. That is certainly not the ace you had to pay up for in drafts.

Sure you could blame the ERA being higher than the FIP and the high WHIP on the Mets terrible defense, but the xFIP shows that better numbers were not to be expected. But that strikeout rate was a career low, and if you watched Syndergaard at all last year, you know he struggled to put batters away. But in the second half he began throwing his slider 11 percent more. That was the largest increase usage of a slider in the big leagues, but it was clearly a team philosophy as the next two largest slider increasers were also Mets (Steven Matz and Jacob deGrom both increased by 10 percent).

Syndergaard also saw his velocity on that pitch climb from 88.6 in the first half to 89.5 in the second half. He also saw a similar velocity increase on his curveball and changeup. In the second half Syndergaard improved in all the stats listed above. He pitched to a 3.82 ERA, 3.15 FIP, 3.24 xFIP with a 1.18 WHIP and 26.4 percent strikeout rate.

The best part? The price is still suppressed by the first half as he is the 23rd pitcher off the board at 70th overall. That means he is a late fourth round pick in 15 team leagues and late fifth in 12 teamers. The combination of the second half arsenal change, slight velocity jump and lower cost has me once again interested. While I do not like him being my top pitcher, I would be fine with Syndergaard as my SP2 or 3 in leagues.

Chris Archer’s best days are long behind him and in the first half last year he was pitching so poorly, he was dropped in many leagues. It was so bad that I thought there was no way I could ever be interested in him again for fantasy. I thought he would forever be a strikeout pitcher with awful ratios. But in the second half, he made some substantial changes. His second-half ERA improved by 0.88 runs compared to the first half, while his WHIP improved by 0.18.

The big jumps were in his peripherals as his second-half FIP was 2.66 runs better than the first, the largest jump of all pitchers. His xFIP improved by 1.10, the fourth largest improvement. His second-half FIP was 3.29 and the xFIP was 3.64, both of which are better than league average. When you add in that he has had over a 27 percent strikeout rate in four of the last five seasons and the fact that he is just the 102nd pitcher off the board (261.14 overall) and he starts to look like a value pick.

There is one more positive in his corner. Ray Searage is no longer with the Pirates. For years he was viewed as a reclamation master, but in recent years it seemed he did not conform to modern pitching theories. Pitchers around the league are throwing their fastballs less and less each year, but the Pirates continued to emphasize a heavy reliance on it. In 2019, Pirates pitchers threw a fastball 59.3 percent of the time, the most in the MLB.

Archer threw his slider, notoriously his most dangerous pitch, only 35.5 percent in 2019, his first full season with the Pirates. That was the fewest he threw it since 2014. Their new pitching coach, 37-year-old Oscar Morin, is reportedly a believer in analytics, so I am expecting an uptick in slider usage. In fact, Archer recently said he spoke to Morin and the approach is to maximize what the pitchers do well. He is worth a roster spot on in the later rounds of drafts.

Reynaldo Lopez is the king of flashing his potential, only to get blown up in the next start. But, he became more consistent in the second half. He improved his ERA by 2.05 runs in the second half compared to the first. He also reduced his FIP by 1.62, his xFIP by 0.98 and his WHIP by 0.27.

I understand if you are hesitant about buying in, but he made some adjustments that led to those improvements. First, he reduced the use of his changeup by 10 percent, in place throwing his slider six percent more and fastball four percent more.

Even better, he gained velocity in the second half. He gained an extra 1.5 MPH on his fastball, the largest increase of all pitchers. He also gained 1.5 MPH on his slider, the third-largest jump in the league. The change in pitch usage should pique some interest, but the velocity gain is huge. The two together make him very much worth taking a gamble on as the 109th pitcher off the board at pick 285.72 overall.