The final Statcast numbers for 2020 will undoubtedly reap some interesting data. Small sample sizes abound, so throw in scheduling quirks, numerous injuries, seven-inning doubleheaders and a universal DH and you have the recipe for statistical outliers galore.

Fantasy baseball season has one glorious week remaining, so the best use of this space would be to find players that can help through the waiver wire as streamers based on Statcast.

Here are some hot hitters who can help based on their rolling xSLG over the past 50 plate appearances. Players listed will be below the 50% rostered threshold in Yahoo fantasy leagues.

Slugging itself isn't an advanced statistic but expected statistics dig into the details of a player's batted-ball data. The players below have seen an exponential spike in expected slugging and, not surprisingly, performance as well.

All statistics  taken from BaseballSavant and are current as of September 21, 2020.

Over the last two weeks, Calhoun has transformed from one of the worst regulars in baseball to one of the hottest sluggers. On September 6, Calhoun was coming off a six-game hitless streak that dropped his slash line to .186/.321/.419. Since then, he's slashing .372/.431/.930 with seven HR, 16 RBI, 11 R in the last 12 games. He's pulling the ball at a 64% clip and hitting it hard 59% of the time, so naturally it's leaving the yard quite frequently. 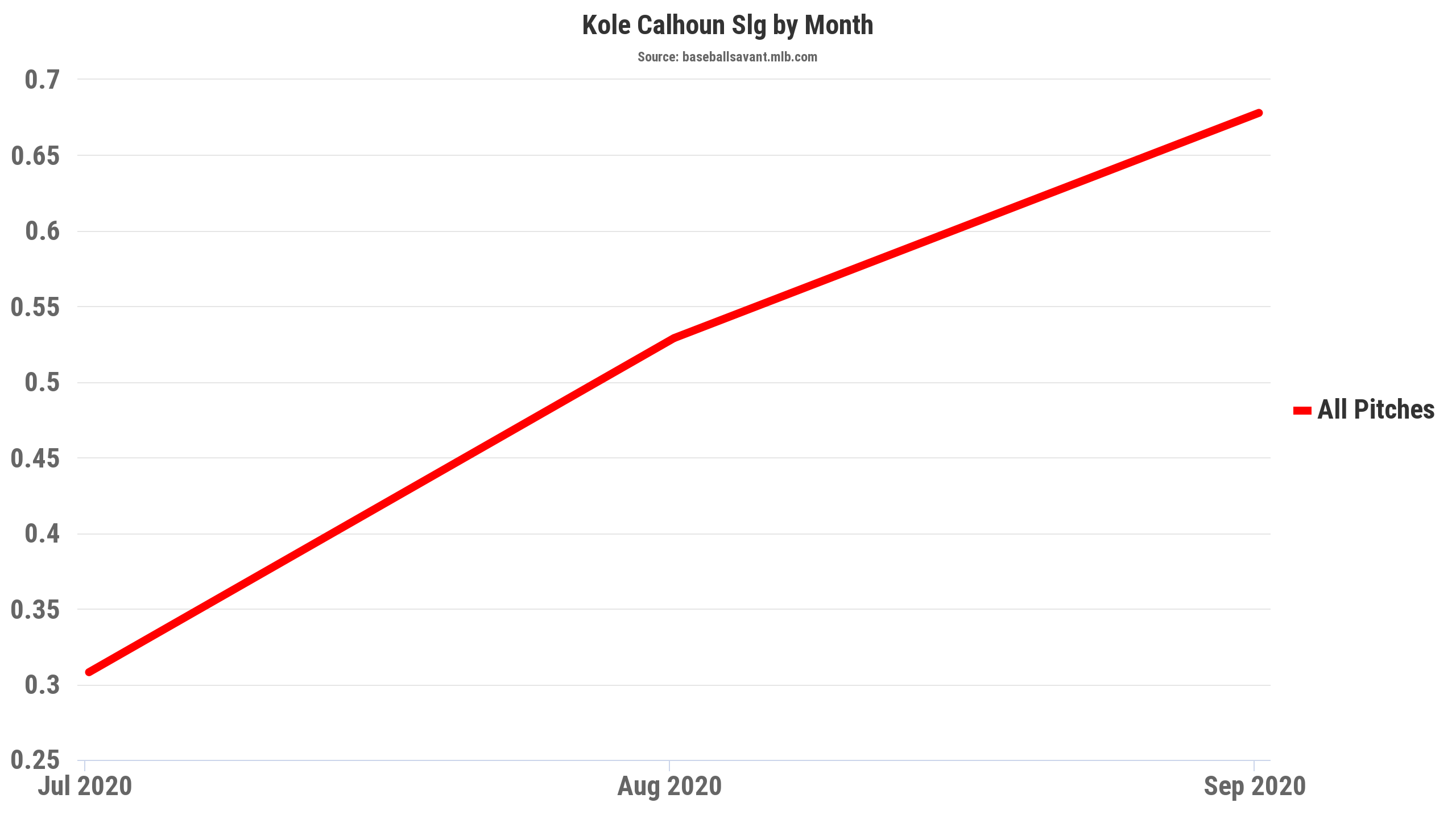 Calhoun has been prone to massive swings in production recently. Most notably, in 2018 he started the year batting .157 with two homers over the first three months and then clubbed 16 HR the next three months. This is a matter of ignoring the season-long stats (and the ballclub) in order to take advantage of a player on the rise.

Over the past two weeks, Vogelbach is hitting .417 with three HR, 10 RBI in 36 at-bats with Milwaukee. By contrast, he was batting .094 with two HR, four RBI in 53 at-bats before Seattle traded him to Toronto, where he basically did not play before getting DFA'd. One thing is for sure, Vogelbach is also a streaky hitter, for better or worse. Right now, it's as good as it can get.

The Brewers closed out the last regular season game at Miller Park with a big W.

Daniel Vogelbach drove in all 5 runs on two blasts as the Crew swept the Royals out of town.#ThisIsMyCrew pic.twitter.com/vIVTDh9T2s

For roto managers, the appeal here is obviously the promise of more home runs over the coming days. The Brewers have to contend with the trio of Luis Castillo, Sonny Gray, and Trevor Bauer over their next three games, which could be tough sledding even during a hot streak. A five-game set with the Cardinals wraps things up and could make for a slightly better time.

If you're like me, you dropped Lowe in dynasty back at the beginning of the season when he didn't make the active roster and then refused to pick him back up again until it was too late. In redraft, most have been hesitant to even begin with Lowe until now. The Rays love jerking players in and out of the lineup, regardless of performance. Plus, Lowe really didn't do much until 9/11 when he smashed a pair of homers in a beating handed down to Boston. He's only gone yard one more time since but he is reaching base and driving in runs, so it's not as if he's a one-trick pony.

Lowe's raw power is graded at 65, so the potential has always been there. He's not selling out for power, which is a positive sign. Over his 47 at-bats in 2020, he's posting a low 18.7% FB% with a slightly above-average 40.7% Pull%. The 33.3% LD% is a welcome sight, although it would be nice to see him trade off some of those liners for long flies that could results in yardwork. With regular playing time down the stretch, he'll get a chance to showcase his power and might be worth streaming.

Former Phillies first baseman Ruf hadn't cracked a Major League roster since 2016. Injuries cleared a path for him to make an impact down the stretch and he is taking advantage. Since September began, he has four homers, three doubles, and a .400 average in 30 AB. Based on his career stats and the fact he's now 34 years old, we know this means nothing other than the fact he is enjoying a hot streak as a fill-in for a team falling out of the playoff picture. For fantasy purposes, if he's hot, he's worth a look.

All of the Giants' remaining games will be at home, first to face the Rockies and then the Padres. This is great news, as Ruf is slugging 474 points higher at Oracle Park where he's hit four of his five home runs this year. Facing Colorado is a plus but San Diego is a tougher test. Give Ruf a chance in the early portion of the week then be ready to pull the plug if necessary.

Hays might have the least pure power of the names on this list but he may also have the highest overall ceiling. Hays was a top-25 overall prospect before 2018 and had a promising September in 2019. He started the season as the regular center fielder in 2020 but a rib fracture cost him a month. Now, he's trying to finish strong once again.

Over the past week, Hays is slashing .333/.379/.481 with a solo shot to his credit. Baltimore will keep him in the lineup every day to see if he can retain the CF job heading into 2021. A plus schedule finds them visiting Boston with its league-worst 5.80 ERA before traveling to Buffalo to face the Blue Jays where their "home park" has the highest run factor and second-highest HR factor in the majors. Hays is a better option in points league but don't be surprised if he leaves the yard another time or two as well.