So far we've covered some possible players to avoid at both 1B and 2B, so now we'll finish up by looking at 3B. Just as a refresher, my goal is these articles is to point out players who I believe won't match the value necessary for their current ADP.

We frequently want to label these players as a "bust," but, based on comments for the other articles in the series, that's a loaded word that brings a lot of preconceived notions. Instead, think of these players as guys who require a large amount of draft capital but who aren't likely to hit the production needed to bring back that value at that cost. So we're not talking about taking a shot on Mitch Keller in the 15th round of a 12-team league and him not panning out. We're focusing on taking somebody in the first 13 rounds of a 12-team league, so within the top 156 players, and them not hitting, which likely means you've missed out on production that should have been available at the same draft slot.

Below I've flagged a few third basemen drafted within the top 156 players who present more risk than I'm personally comfortable with at their ADP. While some of them might not wind up being the textbook definition of a bust, my hope is to help you limit risk and missed value in the early part of your draft.

We'll start out by immediately testing the "draft value" terminology here as opposed to "bust." Vladimir Guerrero Jr is likely to be a good major league baseball player with a long and distinguished career. He's also likely to have a solid second campaign in the major leagues, but based on what we saw in 2019, he'd have to drastically out-perform even the friendliest expectations in order for him to bring back the value of a top-60 pick.

Despite his outsized expectations, Vlad Jr.'s rookie year was fine. In 123 games, he finished with a line of .272/.339/.433, 15 home runs, 69 RBI and 52 runs. His exit velocity was above average at 89.4 mph, and he controlled the strike zone relatively well, only striking out 17.7% while walking 8.9%. Yet, his overall contact metrics weren't particularly strong. 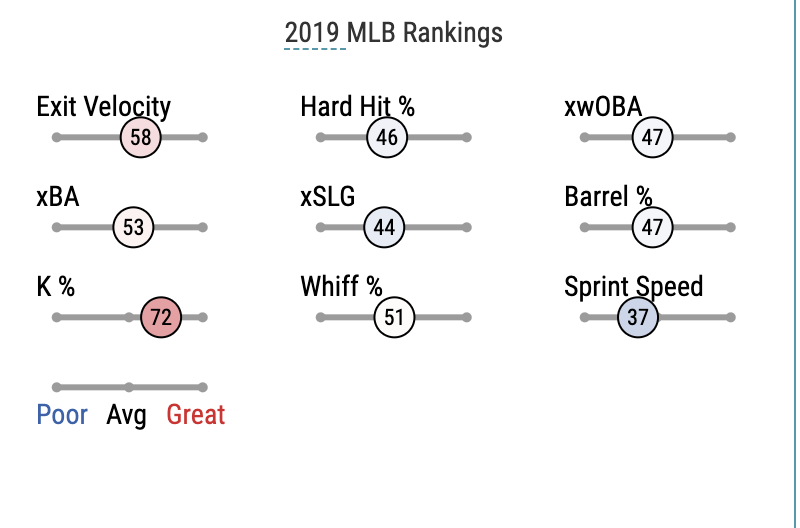 His 7.7 Barrel% was surprisingly low for somebody with the reputation for such prodigious pop, and his 6.7-degree launch angle capped a lot of his home run upside. He didn't chase pitches out of the zone at an unusually high rate (31.6%) and his 10.6 SwStr% doesn't suggest a huge amount of swing and miss, yet almost a quarter of his contact was labeled soft contact. When you look at his overall Swing% of 46.8% it suggests that Vlad Jr. was too passive in his rookie season. A more aggressive approach would likely allow him to not get into such deep counts, which could lead to more home runs and harder contact, albeit likely with more strikeouts as well.

However, I think the problem here is less with Vlad Jr as a player and more with our expectations. The most home runs he ever hit in the minor was 20, back in 2018. He's always had a solid batting average and made lots of contact, but his profile was more of a .300 hitter who could hit 20-25 home runs in the middle of an order. Not only did we expect that right out of the gate, but we seemed to expect more.

According to RotoBaller's Expected Draft Value, a player who bats .297 with 25 home runs, 80 runs, and 90 RBI is worth an ADP of 85. Those numbers would be a tremendous season for Vlad Jr at age 21. In fact, they're better than even the most favorable projections for him; yet, we're still drafting him over 20 picks higher than what his peak value would return. We're hyping up the player to a point where it isn't possible for him to return fantasy value to the teams that draft him in redraft leagues.

Eduardo Escobar was probably the easiest name for me to put onto this list. He's a 31-year-old coming off of a career year and was helped more than most hitters by the change in baseballs last season. More on that later, but I'm more confident in Escobar regressing this season than I am in most of my other baseball opinions/predictions.

Let's walk through the reasons. First, a quick glance at his Statcast page highlights a few of the worries I have. 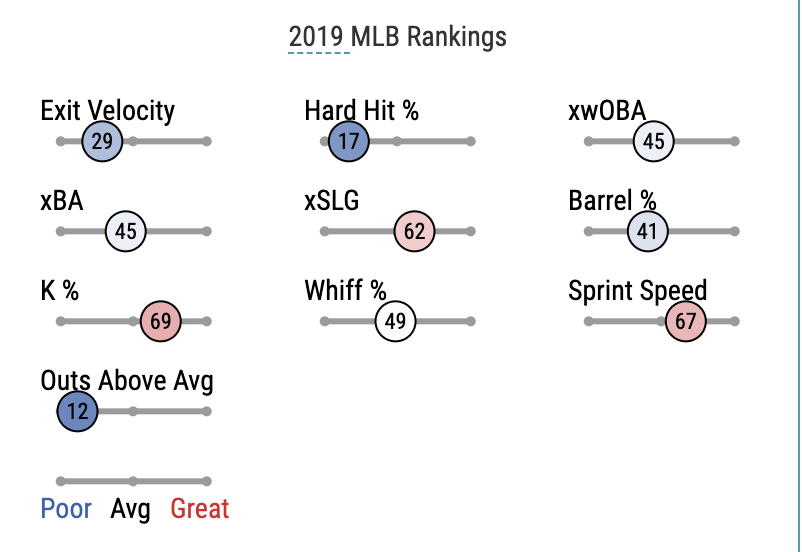 He has poor exit velocity at 87.8 mph and a Barrel% of only seven-percent. Those numbers won't cut it for a guy trying to hit for power, especially when paired with his 44.6 FB% last season. Yes, this elevated fly-ball rate did lead to his spike in home runs but, as Connor Kurcon and Ray Butler uncovered in their phenomenal deep dive on the effects of, what they called, the "dragless baseball" last season, Escobar was near the top of hitters most positively impacted by the new ball. His poor contact metrics and elevated FB% are not a recipe for continued success and scream that 2019 was a fluke.

This is also supported by him over-performing nearly every advanced metric. His .269 batting average was not supported by his .258 xBA just like his .511 SLG is an aberration from his .468 SLG. His .327 xwOBA is lower than his .341 wOBA, and, well, you get the point by now.

What's more, Escobar has poor plate discipline, which contributes to low walk rates: 7.2% in 2019. While he doesn't strike out an exorbitant amount, he also makes a lot of medium contact because he chases pitches outside of the zone, so even though he hits them (68.4% O-Contact) he isn't able to barrel them. His O-Swing% of 40.8% last year was a career-high, as was his 12% SwStr%, which is not indicative of a player that can control the strike zone.

Overall, his profile is one of an overly aggressive hitter, who chases bad pitches, makes average contact, and hits a lot of fly balls. Up until 2019 that led to a batting average in the .260 range, home run totals in the low 20s, and a few stolen bases to add extra value. Why are we all of the sudden believing that one year, in his ninth major league season, signals a new true level?

Even if you were to buy into Escobar's breakout, a player who hits .260 average with 30 HR, 74 runs, and 77 RBI has a rbEDV of 151. Escobar is going thirty picks ahead of that number and is far more likely to hit 25 home runs than 30 home runs. Yes, he'll likely have more RBI and runs than the rbEDV slot since he hits third in a good lineup but that means that Escobar should be drafted around pick 160 overall, even if you have a modicum of faith in him. Don't reach into the 120s.

My concerns with Edman are not with the player, but with the opportunity and the way in which we may be over-valuing his best asset. Edman broke into the majors in the second half of last season and enjoyed a strong stretch in August and September which helped fuel a final line of .304/.350/.500 with 11 home runs, 36 RBI, 59 Runs, and 15 stolen bases.

Throughout his hot streak, Edman had a league-average xBA or better, which was a clear indication of the legitimacy of his average. In part because of his speed, Edman has always had relatively high BABIPs, which have kept his minor league batting averages around .280 or higher. That part of his game is legit.

The power came as a surprise to people because his minor league career-high in home runs was seven, but 87.1 mph average exit velocity and 14.1-degree launch angle suggest that Edman's home run totals could surpass his minor league highs. However, the pace we saw last year is not realistic. He finished with an OPS of .850 but had an xOPS of .775. This is, in part, because his xSLG of .441 is considerably lower than his .500 SLG%. In fact, much of his Statcast profile supports a decline in power performance: 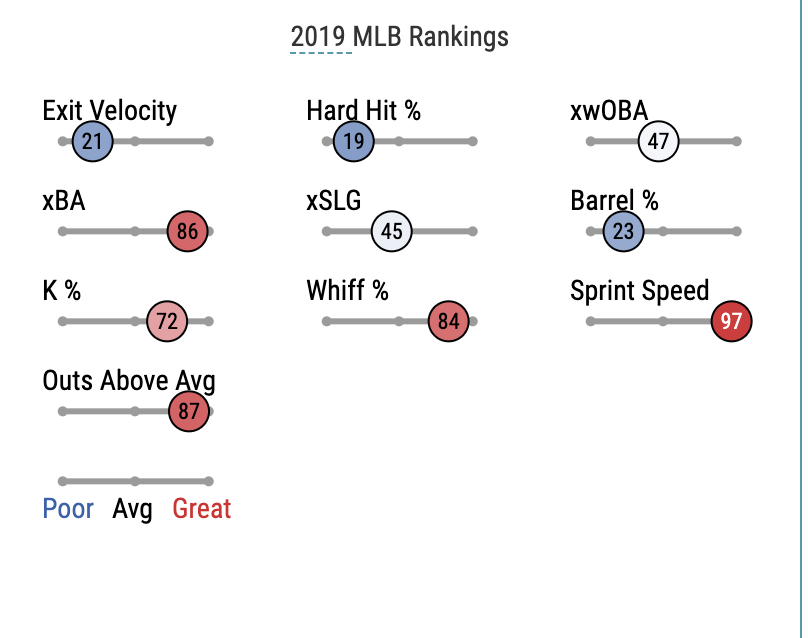 While I mentioned that his average exit velocity and launch angle could lead to an increase in home runs, we can't get carried away and say that he'll become a home run threat. His Exit Velocity, Hard Hit%, and Barrel% are too low for fantasy owners to count on anything more than 15 home runs over a full season, given consistent playing time. Even that amount would be great for fantasy owners when paired with his 97th-percentile speed, but anything more would be foolish to bank on.

So, based on minor league track record and advanced metrics, Edman seems like a high batting average hitter who could contribute 15-home runs and 20-stolen bases, if he becomes a full-time player. Only, as of right now, he has no place to play. The Cardinals will roll out Paul Goldschmidt, Kolten Wong, Paul DeJong, and Matt Carpenter on their infield, which leaves Edman as a utility man. And yes, a few of those guys have had injury issues which could force Edman into the regular at-bats, but we're drafting him as if that's a lock to happen.

Even then, we're drafting him too high. According to rbEDV a hitter who finishes with 14 home runs, 20 stolen bases, and 72 runs, to go along with a .261 average is good for an ADP of 191. Edman is likely to hit closer to .290, but he's also going 60 picks above that rbEDV slot, and those counting categories are totals he'd only hit as a full-time player. His true value appears to be around the 160-170 range rather than drafting him in a spot where he'd only return value if he gets locked into a full-time role and puts up numbers at roughly the same pace he did last year.