This article is part one of a three-part series that will detail findings related to those questions. Part one will introduce the research and discuss the findings, part two will identify potential fantasy values for 2021 based on the findings, and part three will discuss the longer-term applications of the findings.

xwOBAcon can be broken down into four variables:

With those variables in mind, the following equation represents xwOBAcon:

One way to determine how much influence each of those variables has on changes in xwOBAcon is to hold all other variables constant while applying a one standard deviation increase to the variable in question. The graph below shows both the scale of a one-standard-deviation change in each variable as well as the average effect of that change on xwOBAcon for the sampled hitters. 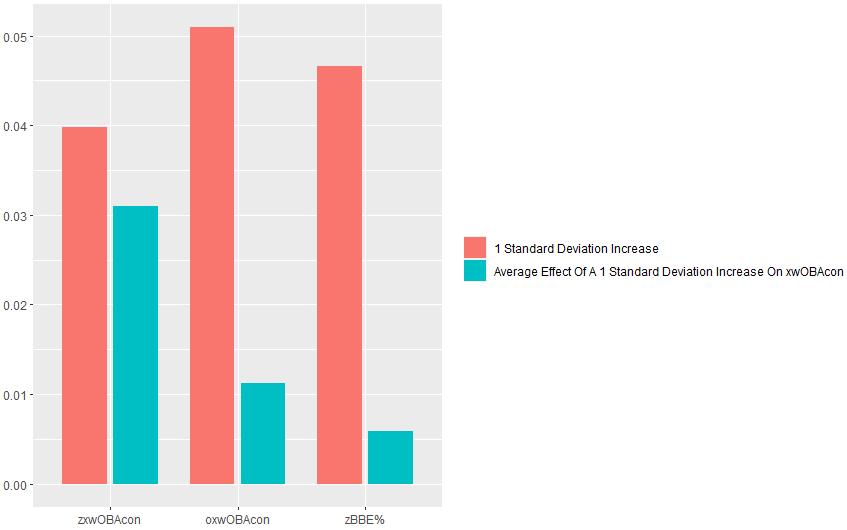 That zBBE% is by far the least significant of the three variables in this regard does not mean that plate discipline and contact skills never drive changes in contact quality, but those skills are likely not worth focusing on when searching for potential xwOBAcon risers. Instead, fantasy managers should look for likely zxwOBAcon risers to spot contact quality based draft values.

Since season-to-season changes in zxwOBAcon (and each of the other variables) can be approximated by a normal distribution, around 16% of hitters will improve their zxwOBAcon by more than one standard deviation each season. Identifying the hitters likely to be a part of that top 16% will allow fantasy managers to find undervalued hitters in drafts. 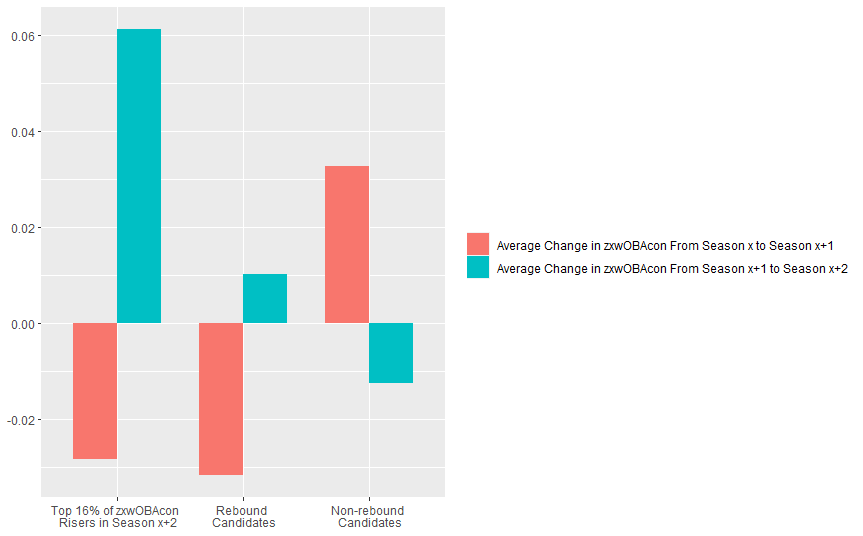 To some extent, that breakdown should be expected. That hitters don’t maintain all of their declines (or gains) in zxwOBAcon each season -- although valuable information -- is not particularly notable. 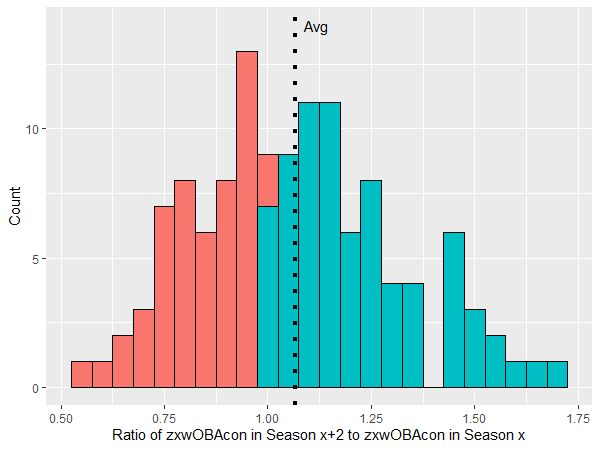 Still, not every rebound candidate is a lock to recoup most of their zxwOBAcon losses in season x+2. It’s not clear what separates hitters who bounce back from those who don’t -- the size of a hitter’s drop in zxOBAcon had no bearing on the size of their rebound -- but fantasy managers should probably expect less robust bouncebacks (or a continued decline) from hitters who saw their zxwOBAcon decline in two consecutive seasons(5).

In part two, I’ll go into more detail on players who suffered most from drops in zxwOBAcon in 2020 and establish target draft pick ranges for those players. For now, here are the five hitters who saw their zxwOBAcon drop most between 2019 and 2020 (min. 100 batted ball events against pitches inside of the strike zone):

Joey Gallo jumps out as the biggest faller in zxwOBAcon by a wide margin. Based on the research outlined above, fantasy managers should not be concerned about the scale of Gallo’s decline in zxwOBAcon, and the relative likelihood of a bounceback season (in terms of contact quality) makes Gallo an attractive buy-low candidate if he falls in drafts.

Yoan Moncada is another player who is a good bet to rebound in 2021. Coronavirus-related drags on Moncada’s 2020 performance should (hopefully) be non-issues in 2021, and the data supports a zxwOBAcon rebound under normal circumstances.

The last player I’ll touch on here is Cody Bellinger. Fantasy managers who may be worried about Bellinger’s steep performance drop off between 2019 and 2020 should prepare for him to rebound in a big way next season, and the 25-year-old represents a potential bargain in drafts because of his relatively poor 2020.