Is it feasible to do a weekly H2H league in 2020? Sure. Is it a great idea? Not really. With just under 10 weeks of actual baseball, the whole "sprint" metaphor will become real in a hurry. Total points leagues aren't as popular but make a lot more sense over the course of a 60-game season.

Regardless of how your league proceeds, points leagues must be approached differently from roto, both on draft day and throughout the season. Plate discipline matters more than category specialization and simply showing up to collect IP or AB will make a huge difference, especially in 2020.

Whether you are set to take part in a last-minute draft or simply want to size up the relative strength of your team in an existing league, we have you covered. Here is a final preseason update to our points league rankings, compiled by Nicklaus Gaut, Riley Mrack, and myself. Rather than going position by position, I will highlight some of the biggest risers and fallers since Summer Training began, as well as some sneaky value picks to target late in drafts or in your first waiver run. I won't address the obvious cases of players who have dropped due to COVID-related concerns. Here are the top 250 players in our rankings, followed by analysis, including a few sleepers to keep an eye on.

Marcell Ozuna has jumped up from 79 to 58, presumably due to Nick and I professing our mutual love for him each week on the WPC+ podcast. Nick Markakis is out and Yasiel Puig never came in, so Ozuna's everyday playing time and spot as the cleanup man are locked in. It also helps that Freddie Freeman appears ready for Opening Day, so all the pieces are falling into place for Ozuna to succeed.

Kenta Maeda has jumped 18 spots over the past month for our rankers, from 165 to 147 overall, making him SP42 in our points-league rankings. The new schedule that pits regional teams against each other figures to help Central division pitchers the most. In fact, Riley identified two other Minnesota pitchers as great draft values based on the schedule, but someone higher up like Maeda also gets a bump. His Statcast profile from last year was nothing short of outstanding despite a lack of elite velocity. 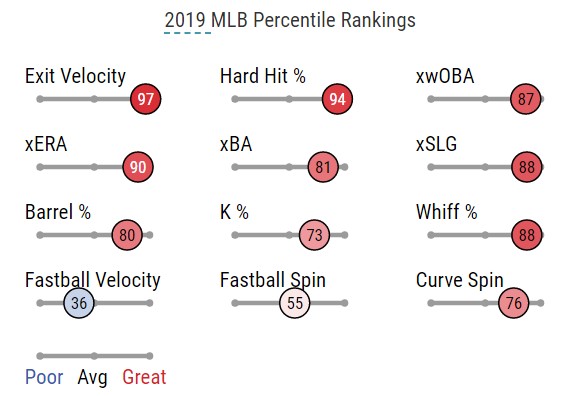 Maeda moves to a less favorable home park, but the weaker lineups he'll face throughout the short season will more than make up for it.

Alex Verdugo climbs 15 spots, mainly thanks to Nick giving him a 20-spot bump over the past month. The delay has given him time to recover from offseason back issues and his profile as a high-average, low-strikeout hitter (.294 AVG, 13% K% in 2019) make him very appealing in points formats. Much has been made of the Red Sox looking less like a contender this year, but their offense shouldn't lose very much even with Mookie Betts gone. The main issue with Verdugo is the fact he's projected to bat seventh according to RosterResource, which may cost him runs and RBI opportunities. If he finds his way into the top-half of the order, his value could be that of a top-100 player.

Joe Musgrove isn't the most exciting name on a fantasy roster but his consistency and low walk rate are appealing in this format. He walked 5.4% of batters faced in 2019 after a 4.7% walk rate in 2018, which compensates for the mediocre strikeout rate of 22%. If he can bring his ERA closer to his xERA of 4.03 from last year, ideally lower, then he can be an anchor in the middle of your rotation.

All the Yankees outfielder (other than poor Clint Frazier) has seen his stock rise after the long delay to rest and recover. Aaron Hicks has benefited the most, raising up to 320 from 364 in our rankings. That's still barely within the threshold of fantasy relevance, but he is a nice late-round sleeper or streamer to consider. It's almost hard to judge what he can bring to the table because he simply can't stay healthy long enough. If we get some semblance of the Hicks from two years ago when he held a 3.6% K-BB% as opposed to last year's 16% K-BB% then he could be a revelation.

Everybody Loves Howie. Sounds like a 90s sitcom but it should be the tagline for fantasy baseball analysis everywhere. Nobody's stock has risen more than Howie Kendrick over the last month and our rankings are no exception. Kendrick went from 304th overall to 210th in a month's time for a couple of reasons. Ryan Zimmerman opting out of the season, the DH being fully implemented, and everyone realizing how freaking amazing his Statcast numbers were last year. Oh, and the fact that multi-positional eligibility is even more important this year, with Kendrick being one of the most eligible of fantasy pickups.

No Yoshi puns here. Just raising awareness that Yoshitomo Tsutsugo is going to be a thing this year. He may DH for the Rays initially, but he is eligible at 3B and OF in Yahoo leagues and is just 16% owned. Manager Kevin Cash recently stated that Tsutsugo won't leadoff as previously speculated, but he will hit somewhere near the top of the order. Obviously, we don't know exactly we'll get from him at the Major League level yet, but he is in his prime at 28 and playing time doesn't seem to be a concern any longer. Just hope he doesn't cross any banana peels on the basepaths.

I'd be remiss if I didn't mention that Mike Trout went from the #1 overall player in our June rankings to the eighth spot just ahead of Opening Day. Obviously, this has everything to do with the number of at-bats he may or may not collect due to impending paternity leave and some frightening comments about considering opting out. Nick isn't willing to pay a first-round price anymore, while Riley is holding firm with him at the third spot, whereas I'm the middle man.

It's not a huge decline but Victor Robles tumbled out of the top 100 to 111 overall. His run-scoring and stolen base totals could be underwhelming if he stays in the seventh spot of the lineup. It's not that we're projecting him to be a bust this year; he simply isn't worth his current ADP of 75 in points leagues.

Willie Calhoun can't catch a break and neither can his fantasy owners. He was all of one week into his rookie season before a quad strain landed him on the IL in May of 2019. A month later, he returned and started mashing the ball. He wound up launching 16 homers with 36 RBI and 37 runs scored in the second half of the year. Due to be a popular breakout candidate, he was struck on the jaw by a pitch in spring training, recovered in time for Summer Training, and then suffered a hip injury. Luckily, it appears he may avoid the IL to start the season, so his precipitous drop from 158 to 200 in our rankings should be taken as a sign that his value is depressed relative to what he could produce, assuming he finds a way to stay healthy.

Cardinals reliever Giovanny Gallegos was a popular pickup late last year and a sleeper candidate to earn saves back in the first iteration of fantasy draft season. Now, he appears to be on the outside looking in as Kwang-Hyun Kim has been announced as the closer and Ryan Helsley has made a favorable impression on his manager as well. This isn't directly due to a COVID diagnosis, rather a late arrival at camp after travel issues from Mexico set him back in his preparation. Gallegos could take the role over at some point but even with Jordan Hicks opting out, it isn't guaranteed. Mike Schildt could simply use a committee, which is why we dropped him down to 342, out of draft-worthy range.

Here are some players that are lightly owned and ranked outside of our top 250 in points leagues that may warrant a waiver wire add soon.

Ross Stripling (RP/SP, LAD) - With David Price opting out, it appears Stripling is back in the rotation for now. He was one of our biggest risers for that reason, but is still available in 45% of Yahoo leagues. He's never posted an ERA over 4.00 in four Major League seasons and has a career 17.9% K-BB%. He will technically serve as the fifth starter but is set to pitch the second game of the season, which is fortunate because it comes against division rival San Francisco. Even in a swingman or long-relief role, he would have value.

Austin Hays (OF, BAL) - Orioles are usually best avoided, but Hays could be the leadoff hitter for the duration of the season. He showed well last year in a small sample, striking out just 17.3% of the time while posted an expected slash line of .313/.373/.497. I expect him to outperform his projections by reaching double-digit homers with a handful of steals alongside an average in the 280s.

Anthony DeSclafani (SP, CIN) - He doesn't have the best ballpark for a pitcher (OK, it's the worst) but the schedule is favorable for the Reds this year. That helps players like Luis Castillo and Sonny Gray but it also makes DeSclafani an end-of-rotation option. He pitched to a decent 4.29 SIERA which was 30th among qualified starters last year and struck out a batter per inning. He landed on the IL hours before first pitch of Opening Day but is expected to miss just one start before drawing the Tigers in Comerica.

Alex Dickerson (OF, SF) - If you thought the O's offense was bad... The entire Giants lineup is rife with sleepers, mainly because nobody has ever heard of most of them. Buster Posey is out, Evan Longoria and Brandon Belt are hurt, and the team didn't bring in any new blood during the offseason. That means Hunter Pence is back as the cleanup hitter and Alex Dickerson is his support. Dickerson put together a strong start to 2019, hitting .346 before landing on the Injured List. He's had trouble staying healthy his whole career, but if he can show up every day, there's value to be had as a fourth outfielder or utility bat.